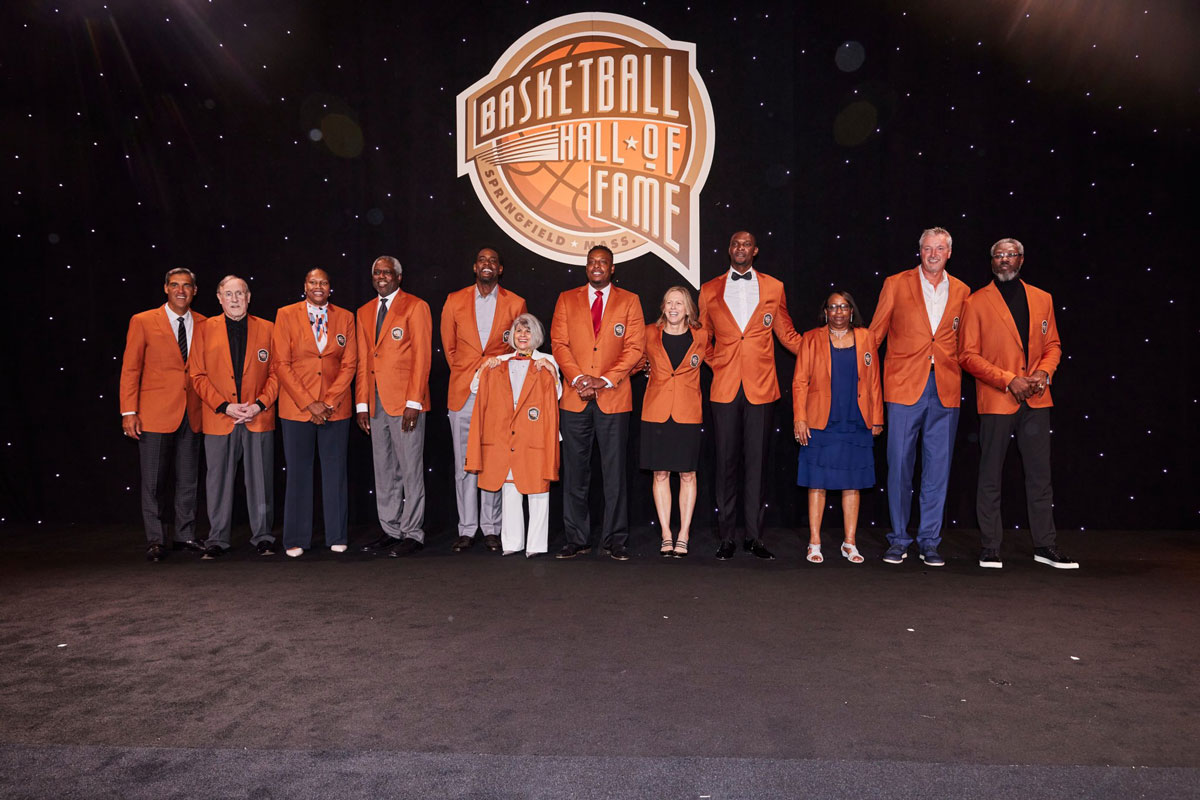 The Hall Of Fame Makes Way For Class Of 2021

This weekend marked two decades since a dark day in American history. The 20th anniversary of the 9/11 terrorist attacks on the World Trade Center.

The same morning after, two Kings of New York announced their return. From Jay-Z’s iconic landmark album ‘The Blueprint’ that set the standard for modern hip-hop. To Michael Jordan announcing his return to the NBA with the Washington Wizards. Just hours later, the towers fell and our world changed forever.

It’s an anniversary we wish we didn’t have to have, but one we will never forget like the heroes and the ones we lost as two beams are illuminated in the sky, reaching to the heavens. On this same day we need a respite. A distraction of solidarity giving us hope like after that fateful day. Like the return of Jay-Z for ‘The Takeover’ in the ‘Heart Of The City’. Or MJ coming back and donating his entire two-year playing salary to the 9/11 relief fund.

Or like this weekend the second Naismith Basketball Hall of Fame of the year, live from Springfield. After a corona postponed 2020 class was enshrined just four months back with Vanessa Bryant accepting the honor for her late husband Kobe. Leading a class that consisted of his contemporaries like Tim Duncan, Kevin Garnett and many, many more generational talents.

This years class was headlined by another handful of players who come with their own “feel old yet” caption. KG’s big-three Boston teammate Paul Pierce. A man who came back from dropping to tenth in the draft and even being stabbed 11 times in a brutal club attack (playing all 82 games in the same season), to become a 10 time All-star and of course, an NBA champion. The biggest Celtic legend not called Bird or Bill…and that’s the truth.

Toronto Raptor and Miami Heat legend Chris Bosh, who Voltron formed his own holy trinity with Kings and Flash superheroes in South Beach. Giving Pat Riley his ring back. The number one who this year after coming to terms with a blood clot stopped career wrote lasting ‘Letters To A Young Athlete’ for his inspiring and moving memoirs.

Fab Five legend and King of the Sacramento Kings, Chris Webber. Birthed as a Warrior before some Bullet time in this NBA matrix. Making us say “whoa” like Keanu or the late Black Rob, as this smooth power forward in the golden age of them still made his name. Despite being surrounded with the trees of the last class in the West, Duncan and Garnett. Giving it up for legends Charles Barkley (“making millions for many” as a pioneering broadcaster) and Isiah Thomas in a moving moment for “protecting (him) from the vultures.”

Must Read:
We Must Stop Asian Hate That Is Happening To Families Like The Hachimura's

The big, bad boy and Detroit Piston powering Ben Wallace, always on time from the block like a Big Ben chime in the Big Smoke of London. The amazing afro may have been now been replaced with salt and pepper and a scholarly school teacher suited and booted look for the turtleneck crowd. But this man is to Detroit basketball what Motown is to the Motor City’s music scene. With the pride of a Panther. Walking off stage with the power of a raised fist.

With one of the most imposing frontlines in Hall history, the original ‘Sixth Man Of The Year’ and Euro player stepping into that continents revolution of the NBA, Toni Kukoc completes this dream NBA one. All for his own ‘Last Dance’ next to Jordan.

But that’s not it.

It doesn’t get much bigger in the post playing career celebrations than WNBA legend Lauren Jackson. Hailing from Down Under this game changer like former Bull Luc Longley is as important to Olympic hoops, the Seattle Storm and the women’s game on a whole as GOAT Sue Bird. If not more. Without her Seattle and Sue doesn’t have all those rings and maybe we don’t have booming players like Australia’s own Liz Cambage.

“To our fans, women’s basketball is such a beautiful sport and I thank you for your support,” Jackson said on Zoom, locked down, down under.

Two-time Olympic Gold winner Yolanda Griffith also made her way down the Hall like her smooth game did across the floor. All the way to a podium position with all that glitters.

“I was unknown. I came out of nowhere. I never gave up on my dreams and here I am at the pinnacle, the Naismith Memorial Basketball Hall of Fame,” she said, taking it all in.

Coaches got put in too. Like Villanova’s Jay Wright and his classy college career. Sacramento leader Rick Adelman being added alongside Webber and Hall of Famer Bill Russell, who now enters as a coach too.

The fifth player to do so, but a revolutionary like no other contemporary who coached his Celtics as a player during the 60’s Civil Rights era. Marching in movements like Muhammad Ali. A basketball X or MLK honored by Barack Obama via video who said it best. “As tall as Bill Russell stands, his example and his legacy rise far, far higher.”

This weekend basketball yet again showed us it never stops spinning, no matter what is going on in this world. This game can reflect real life and also offer us solace in our darkest hours. From a lockout to lockdown. Or the Bubble to the next star that’s about to breakout to one day find his or her pride of place here.

For many reasons this weekend is one that we wish we could forget, but this class act for the Hall has paved our memories with something we’ll always remember with reverence. No matter how real or raw it gets.

Like Chris Bosh said in closing, “after finally making it to the mountaintop with so much more to do, in my mind, so much more work to do, it all stopped,” like the world has. “I eventually came to realize that we all have it in our power to make the most out of every day despite what happens, to turn setbacks into strengths.”

In this hard knock life and in these troubled times it’s all about striving and surviving. And if you can do that, you belong in a class of your own.