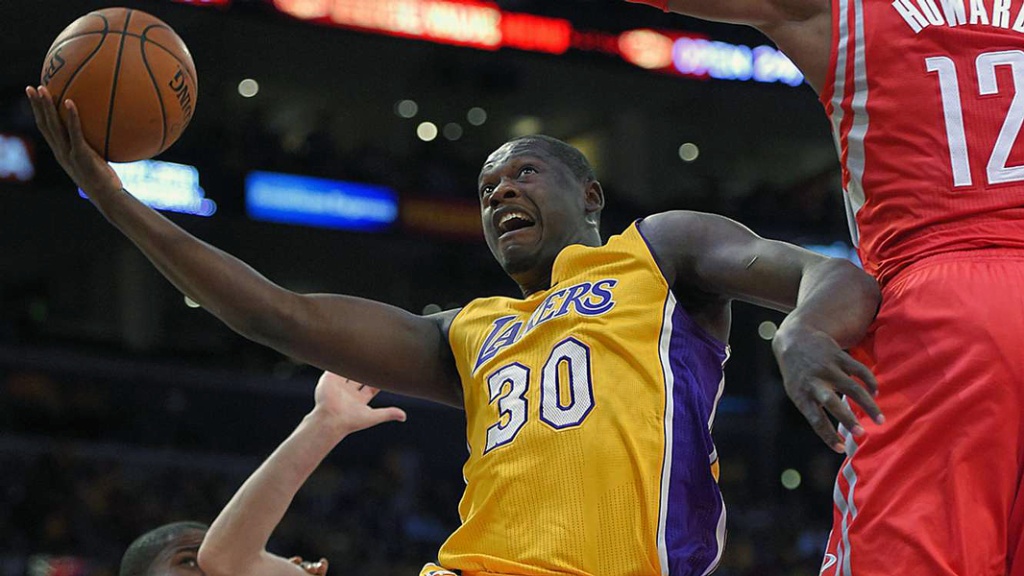 Tough Break For Julius Randle And The Luck Of The Lakers

Perhaps its the luck of the Irish.

The Celtic curse that’s been hanging over the Los Angeles Lakers for storied decades, like purple and gold celebratory balloons falling from the retired rafters to a Forum floor for nobody to see after everyone witnessed Boston sweep L.A. off their own home court.

Always in second place, the first loser and now living on the luck of the lottery. Then Kentucky big man Julius Randle was just the ticket to ride the California coast as the next giant great in a post Laker legacy. Last night in the grand STAPLE opening you’d think the Lakers only problems where their last future big man (all for one second of a season) Dwight Howard having the last cheesy grin as he and Kobe went Shaq back and forth like a little red corvette and a brick wall. As the Rockets routed their former player Jeremy Lin and Lakers 108-90, on what people see as the Clippers floor that was the smallest, humiliating problem of the night.

Where’s Steve Blake when you need him? The Lakers are clutching at straws at the guard position now Steve Nash is out for what may be the rest of his career and Nick Young thumbing through magazines on the sidelines for the best part of a month. Finding a Laker player not on Gary Vitti’s table is like that needle and haystack theory. Even top young gunners like Xavier Henry and Wes Johnson have health issues. Then when you thought it couldn’t get any worse it all seemed O.K…and then!

Julius Randle breaks his leg in the Rockets game, fracturing his right tibia which will leave him in a cast and out of the Lakers supporting roll for some time. It’s a Greg Oden, cruel draft wind of change that leaves him praying with Paul George and has everyone from California to Kentucky with their heads in their hands.

Maybe it is time for the Lakers to make that Nash amnesty play for a new player to help (I hear STAPLES regular, Chauncey Billups is free) because its all on would-be mentor Carlos Boozer now. At least the Lake Show had fun taunting Dwight Howard with Kobe and they can rest assured when it comes to Randle, this kid ‘aint soft.