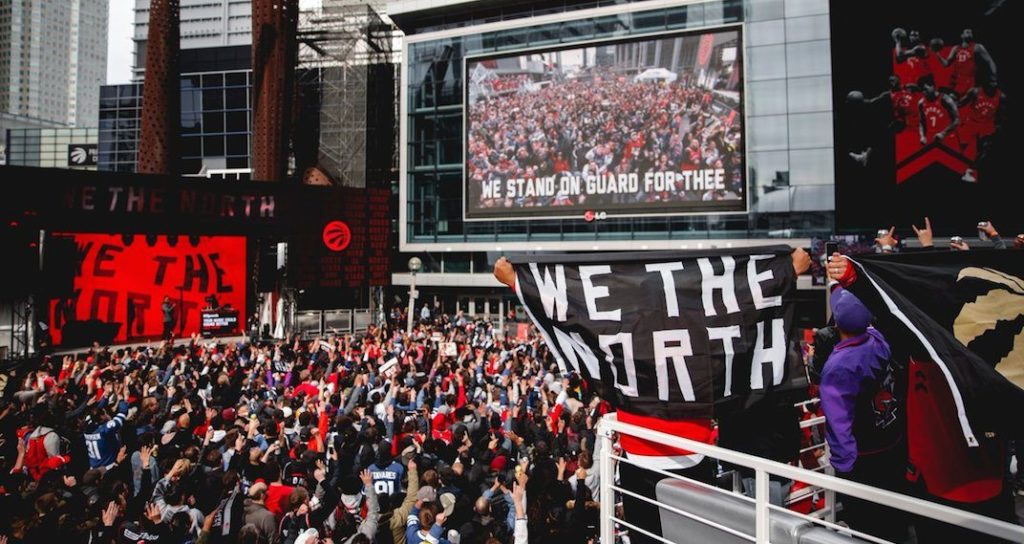 “In Jurassic Park, Raptor fans wait until after dark. Even if the cold might eat them!”

An ace serve or two away from being as legendary as Wimbledon’s ‘Murray Mound’ or ‘Henman Hill’ outside the Scotiabank Arena, the Toronto Raptors Maple Leaf Square’s “Jurassic Park” may just be the ticket for this sold out crowd.

Raptor Klaw, Kawhi Leonard ruled the earth last night. He and the T-Dot at the final tick beat the Sixers in The Six, as his shot bobbled like a beach ball on the surface of a swimming pool before making the biggest splash of these postseason playoffs. Taking longer to fall than Leonardo DiCaprio’s spinning top in ‘Inception’. But this was no dream.

And if you thought the Scotiabank Arena in downtown Toronto erupted last night, then outside in Maple Leaf Square it was like the volcanoes that killed the dinosaurs after that big ball dropped. An Armageddon even Bruce Willis couldn’t save like he wish he could his career.

With all due respect to the Linsanity of Jeremy Lin, or pick your poison whoever is your flash card pick of the bench mob pack, but the Jurassic Park crowd fenced in outside of Scotia is the spiritual sixth man, spark plug. As electric as the paddock like perimeter fence surrounding them feels with this buzz over basketball (and national sport hockey come Leaf picking season), this crowd can’t be contained.

Forget rain or shine. You see the slickers. These faithful fans will pitch a spot waiting for game time like the ball to drop in Times Square for New Year in New York, sleeping bag lining up all day in their hordes huddled for warmth. These beautiful fans will brave the harshest, most frigid temperatures to be the coldest fans in the game in more ways than one. Part of the ‘We The North’ community in the 6 that the Basketball God’s look down on with pride, whilst other armchair fans watch this game for the throne from home. Or leave early like those suit and tie corporate seats trying to catch that last red eye Matt Bonner home.

Can you imagine of they called game early before Kawhi last night?

I could imagine Drake taking in the CN Tower looking up views of the Jurassic like it was all the basketball God’s plan.

Well those in the park for recreation stayed until the beautiful end to a game Butler almost delivered bitter. And you could could phantom cam see every emotion in slow motion last night as Leonard’s buzzer beating ball toyed with the rim like three dots on messenger, or Damien Lillard even further downtown in Oklahoma City.

This is the spirit of the stadium and the soul of the squad, expanding the capacity arena and the Canadian ballclubs worldwide fanbase watching on their own Jumbotrons.

And the Toronto Raptors are going to need all the north they can get if they’re going to stop the Bucks in Milwaukee.

But this club has the claws to do it. And if you don’t think they can win in Wisconsin on their own road to being the first franchise outside of the United States to be NBA finalists and who knows what next against the Warriors(?), then just watch this Canadian cornerstone from the Jurassic era.

Extinct in six? Nah! Get ready to hear the North roar.