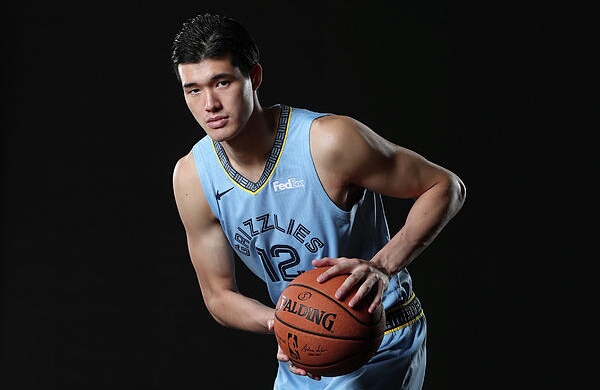 Big outside of Japan, top ten Washington Wizard rookie Rui Hachimura may have become the first Japanese player in history to be taken in the first round of the NBA draft, but look at the guy he also made history with, swapping jerseys like a Dwayne Wade last dance postgame. The one Hachimura held up read Watanabe, like Rui being the second rookie out of Japan to be drafted since Yasutaka Okayama (although the Sumitomo Metal Spark never signed or logged a minute with the Golden State Warriors), the 25 year old Yuta Watanabe became the second Japanese player to play in the National Basketball Association since Toyota Alvark and Phoenix Suns guard Yuta Tabuse.

So even though Rui is on the run to be one of the rookies of the year, the two-way Memphis Grizzlies/Hustle tweening sophomore sensation second coming of Yuta helped pave the hardwood way.

And after this season in what will be their collective year you will see how much this all means in their home host nations Tokyo 2020 Olympic Games, where they will suit up together for their host Japanese nation trying to bring home the gold like 1964.

Before Rui there was Yuta and now you read all about Hachimura and Watanabe together. Although he deserves a call up and way more playing time than a couple of minutes and maybe a made or missed shot, the Memphis Grizzlies next generation after the grit and grind era like Ja Morant and Jaren Jackson Jr. has already achieved so much with all his hustle. Just wait until they give him the ball.

It’s little wonder than that this Japanese sensation has already penned a memoir, releasing his ‘Liking Yields Power’ autobiography in his land of the rising sun in the Far East. Don’t worry the name doesn’t come from some vacuous social media, Facebook or Tinder swipe vacuum (like a Port of Kobe, Japan mural, “Less Likes, More Love”). The title could also be read as ‘Loves Driving Force’ thanks to the wise words that even wrote in kanji aren’t lost in translation for a young man who has achieved so much, coming to America and learning a new language.

Run this through the Google translate like this writer living and working abroad for a year in Japan, penning for his own Tokyo 2020 Olympic dream (writing…I mean do I look like an athlete to you? Maybe a javelin? ) and you’ll get more than the gist.

“At night, the area is enveloped in the dark, and every time you fall in the tranquility, the strength of your shoulders will be lost.” Describing his Tokyo neighbouring Yokohama birthplace (a place coincidentally this writer is now calling home for a calender), that’s just part of how this beautiful basketball book begins. You may not get all of the words…some actually being Bill Murray and Scarlett Johansson, but the ones you do will resonate. Besides what does it matter even in nuance when you will get absolutely all the spirit. And if you live the game like this man who is so love with it he won’t even play video games, then you’ll feel his every heartbeat on the hardwood and his soul for the game. Truly showing that like his banner jersey moment last weekend before the torch he’s about to carry with Rui to the first five rings since Rio, Basketball has no border.

Or if it does than it just got a whole lot bigger than 30 for 30 teams, 48 minutes and 82 games like the changes proposed over this last shot clock day of 24 little hours.

America and Japan share a lot. 7-Elevens on every corner like Starbucks, a deep bond in baseball. But now rounding more than the bases check out the potential they share in this game and these men.

Yuta talks about growing up and idolizing Kobe and the Los Angeles Lakers, which I think we can all relate to. He talks about the psychology and philosophy behind bettering himself as a player in body, soul and mind and making that coast to coast journey from one country to another as he became the first Japanese born player in basketball history to hold down a NCAA Division 1 scholarship.

Talk about going by the book, despite being undrafted and sharing stints in the G-League this man has made his mark.

Although now with Hachimura in the house of hoops, Yuta doesn’t have the biggest selling NBA jersey in Japan like he did last season (even more than Steph Curry and even King Laker LeBron James), but this season he is now a published author. How about this kid? Here’s still looking at him.

“I don’t usually enjoy writing”, Yuta told the press as he released this book to begin the season. But you can hardly tell from this perfect prose. You can tell he “really enjoyed this project”. And you’ll really enjoy reading it to, so long as you can get it translated like the ‘Norwegian Wood’ of a fellow Japanese author you may know, Haruki Murakami (someone get Jay Rubin on the phone). But hey that’s just how global the game is as the world turns like a spinning Spalding on the finger (remember fellow Memphis Grizzlies international and Laker legend and Olympian Pau Gasol has an autobiography out exclusively in Spanish).

Wanting to use “like” as a weapon and “aim for the top”, as he advises to put your energy into something you like and you will “always get something”. Closing with a quote that needs no translation, “My love of basketball has definitely moved my life.”

Told you this was more than a liking matter.

Like all Japanese books and the opposite side of the road this ‘Liking Yields Power’ driving force reads backwards.

The game is truly changing.