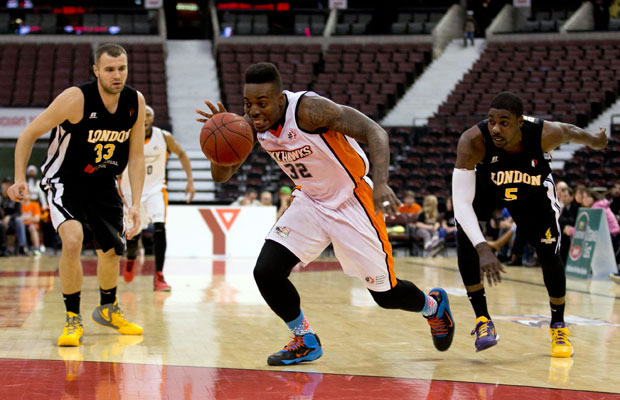 The SkyHawks and Lightning split their previous two meetings, each team denying the home team a win. The fans that braved the icy roads to attend today’s matinee were hoping the SkyHawks would break that trend and give their fans a pre-Christmas win to end their two-game losing streak.

London’s Tim Ellis would open the scoring for the Lightning, and despite giving up the lead a few times in the first quarter, Marvin Phillips would drain a three to regain the lead for London with nine minutes remaining in the first quarter, and they would hold on from that point forward, taking the win 98-90 over the SkyHawks.

For the second straight meeting, the Lightning held Ryan Anderson, the SkyHawks leading scorer, averaging 19.8 points per game, to 8 points. Anderson struggled against the London defense, managing only 3 of 15 field goal attempts and keeping Ryan off the free throw line the entire game. The whole team struggled with shooting, with a .311 field-goal percentage in the first half, and .330 for the game.

While the SkyHawks struggled with their shooting against the London defense, the Lightning were hard to contain, shooting a .402 field goal percentage in the game, lead by Garrett Williamson 21 points and 4 rebounds on 6 of 10 shooting. Tony Bennett contributed 15 points with Marvin Phillips adding 13 points and 16 rebounds.

While he only managed 4 of 19 shooting in the game Jerice Crouch lead the team with 17 points, making 8 of 9 free throws with 14 points in the second half. Tirrell Baines added 15 points and 10 rebounds, scoring 9 of his points in the first half.

Despite playing limited minutes in most games this season, Ottawa native Eric Kibi had his best game of the season contributing 15 points shooting 6 of 13, adding 6 offensive rebounds and 4 assists in almost 25 minutes of play.

With their third consecutive loss, the SkyHawks are in their longest losing streak of their young franchise’s history. Ottawa will look to end that streak when they visit the Windsor Express on December 27th, a team they have yet to solve this season.