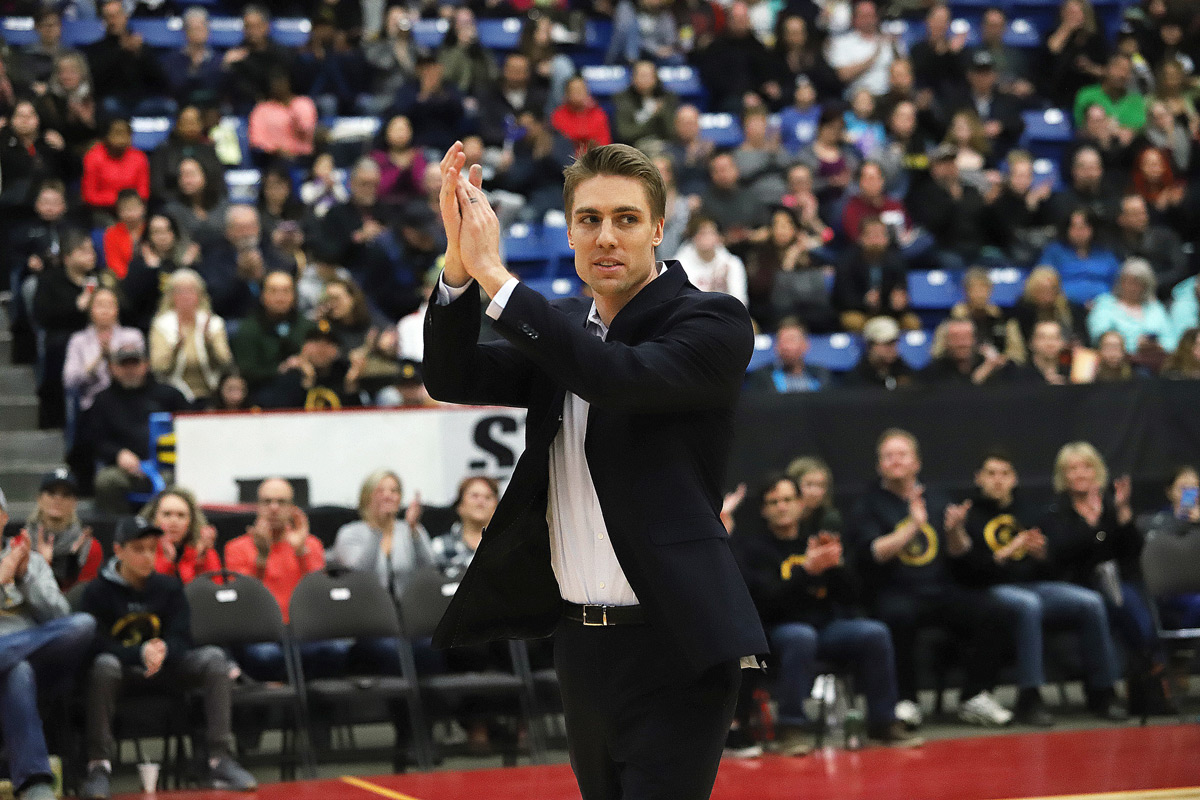 Logan Stutz has put the Sudbury Five on the map as a destination for players. Photo: John Lappa/Sudbury Star

Not long after the Sudbury Five’s inaugural season, vice president of operations Bob Johnston prepared and sent a manual to every team in the National Basketball League of Canada

Johnston was not attempting to reinvent the wheel, nor was his intention to be arrogant in distributing his document – he simply wanted to share his experiences in launching an expansion franchise.

Furthermore, the purpose of the manual was to foster a more collective approach towards becoming a premier destination for basketball fans in North America.

“Some franchises would prefer more to just reduce costs and keep the league more contained and smaller,” says Johnston over the phone from Sudbury. “These are some of the challenges that we’re trying to work through, to try to come up with a common vision for the league.

“Some of the franchises or teams within the league probably felt that our processes and procedures are out of step with what they want to do in their communities. Some probably have used some of our best practices to try to improve their markets, but we haven’t had a whole bunch of discussion about it, quite frankly.”

The Sudbury Five welcomed a sellout crowd to their first-ever home game in 2018-19. While Johnston was somewhat surprised to see a market dominated by junior hockey take an immediate liking to basketball, he emphasizes that he didn’t pull the recipe for success out of thin air.

“We held daily meetings for 10 months before our launch and well before the team hit the court, we also started actively discussing with all the stakeholders opportunities for advertising and sponsorships and selling season tickets and all that energy and hard work culminated in a sellout crowd for our first game,” said Johnston.

A large component of that ability to hit the ground running came with the hiring of Logan Stutz as general manager and head coach after a three-month vetting process.

Stutz’s path to Sudbury is a remarkable story that began with him being the first cut in training camp by the London Lightning ahead of the 2015-16 season.

The six-foot-nine forward, then 27, had been playing in Germany, but decided it was time for his family to return to Kansas City to raise their recently-born daughter. However, when Stutz saw fellow players returning to Europe, he quickly regained the urge to continue his playing career.

Stutz somehow ended up on the doorstep of the Niagara River Lions, where he not only became a positive magnet to everyone in the organization, but was also named league MVP for his efforts on the court that season.

After three NBL Canada seasons as a player, which also included a stop in Windsor, Stutz was finally ready to take on a new role. The award show continued for Stutz in Sudbury as he was named executive of the year for guiding the Five to a 21-19 record and a first-round playoff appearance.

“When I was a player, I always thought it was going to be easy and I think that’s probably why I was like ‘I’m gonna go do this,’ but it’s a ton of work and it’s just very humbling,” says Stutz, who was 30 at time of his hiring.

“As a player, you’re kind of worried about yourself and maybe a couple other guys on the team you take under your wing. As a coach, you’ve got to worry about the whole team – whether they got family up here – your staff, even the community, making sure you’re out doing the right things. But I love it because it’s so much more rewarding than being a player, just knowing the amount of people, the amount of youth in the community that you can impact.”

While with the Windsor Express, Stutz formed a bond that would ultimately play a role in shaping the future of professional basketball in Sudbury.

Braylon Rayson, a speedy and electric scorer, was spending his first season in the league as a rotation player. Frustrated by his lack of playing time and feeling confident in his ability to run the show, the Dallas native was ready to pack up his things and leave Canada for good after a rocky season with the Express.

“If had to go back to Windsor, I wasn’t coming back to Canada,” says Rayson. “It was either they freed me – they traded me – or it was no more Canada. I wasn’t going back to Windsor just because I didn’t like some of the stuff that went on in the organization. I just didn’t agree with it.

“Then I got a call from Logan saying he was going to be a coach somewhere in Canada. I was like, ‘that sounds like a move’, so I ended up going to Sudbury and the rest is history.”

Finally granted the opportunity he believed he deserved, Rayson led the NBL-C in scoring and was named league MVP for the 2018-19 campaign.

Despite admitting that money is a hindrance, Rayson says he will always consider returning to the NBL-C as long as Stutz is around.

“As long as Logan is there, [Sudbury] will always be home,” says Rayson. “If Logan was to leave, then I don’t really know. If a new coach were to come in, they might have a different style. But I know how Logan treats the players. He’s a great coach, a great father, a great friend. If he were to leave, that would probably hurt a lot of people because of the things he did to get the organization to move forward and the success they have had.”

For his part, Stutz says he is in no rush to move on.

“If I get an opportunity at a level that I think is good for me and a place I can learn and expand my game, that’s something I will definitely explore,” says Stutz. “But I’m not going to be in a hurry to leave just to go to a new situation just because it’s new. I’m going to pick and choose and wait for the right opportunity. But for now, things in Sudbury are pretty good.”