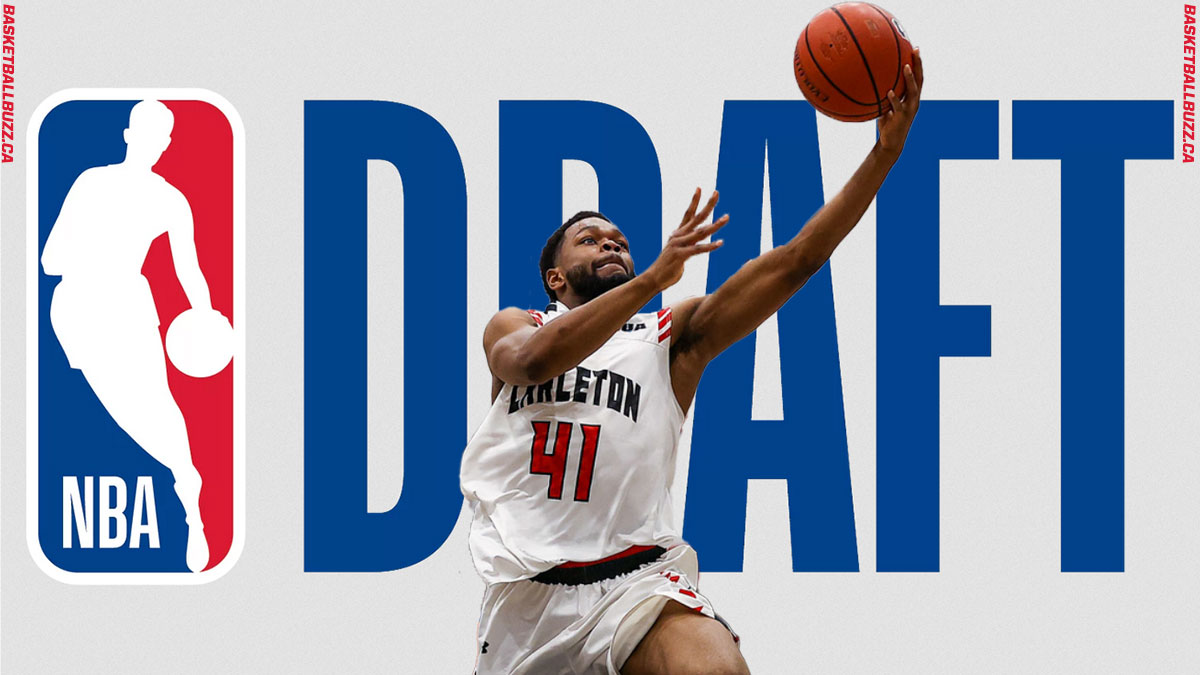 Fresh off of winning his third straight national championship and being named the 2022 U Sports men’s basketball national player of the year, Pandi becomes the first Ravens player to ever declare to the NBA Draft.

“As my final season with the Ravens comes to an end, I am grateful for the opportunity given to me by Coach Smart to develop my game in the city that made me — Ottawa.” wrote Pandi in a shared announcement on his social media channels.

“After winning the national title with the Ravens and being named 2019-2020 Rookie of the year in my first season, multiple D1 opportunities knocked at my door. Carleton had accepted me with open arms and had my best interests at heart, leading to my decision to stay and prove myself right from a country that I love, Canada.”

According to additional reports, Pandi is expected to sign with an agent, thus putting an end to his collegiate career.

Although not a familiar name to many NBA scouts and recruiters, Pandi has always been amongst the best Canadian players in the class of 2018 and has played with or against some of the biggest names to have come out of Canada recently.

Getting his first shine as a young 15-year-old star of the Ottawa Elite basketball program, Pandi rose to prominence when he made Team Ontario. Starring alongside current New York Knicks star guard RJ Barrett and Gonzaga’s Andrew Nembhard the trio knocked off Luguentz Dort (Oklahoma City Thunder) and Team Quebec to win the 2014 Canadian U15 national championship.

The three hooked-up once again, this time on the AAU summer circuit, playing for Toronto’s UPLAY squad at the 2016 and 2017 Nike EYBL league.

Looking to pursue his dream of playing NCAA division I basketball, he transferred to Bull City Prep in Durham, North Carolina for one year before committing to then head coach Dave Smart and the Ravens program during the summer of 2018.

During his first season with the Ravens (2018-19), he appeared in only four non-conference games, before being shut down for the season as a redshirt.

The following season, with a year of experience under his belt, Pandi took charge of the Ravens team. During the preseason, he racked-up 19 points on 8-of-12 shots adding 3 rebounds, 2 blocks as Carleton took down the Albany Great Danes 90-77. Two months later, he dropped 16 points on 6-of-7 shooting on the road against the legendary Jim Boehiem and the Syracuse Orange.

For his effort, he was awarded the 2019-20 U Sports rookie of the year award and was named a second-team All-Canadian. The Ravens went 35-3 and won back-to-back national titles in front of their loyal supporters at the TD Place in Ottawa.

Continuing his development, Pandi gained professional experience by suiting-up for the expansion Ottawa Blackjacks in their inaugural season in the Canadian Elite Basketball League (CEBL). The Carleton guard played in his six games and averaged 8.3 points, 5.3 rebounds, 1.3 steals and 22 minutes per game, nabbing the 2020 CEBL U Sports player of the year.

The ongoing pandemic cancelled the 2020-21 U sports season, leaving many players in limbo. Luckily for Pandi, the CEBL pulled off the unthinkable, becoming the first Canadian sports league to return to action in 2021.

Selected 13th overall in the 21-player 2021 CEBL U Sports Draft by the Niagara River Lions he proved that he belonged. Sharing the court with several former Carleton Ravens greats in Philip and Thomas Scrubb he earned the respect of his peers including American imports Javin DeLaurier and Xavier Sneed. The two went on to sign NBA deals with the Milwaukee Bucks and the Utah Jazz.

Holding his own against players three-to-five years older than him, he snatched his second consecutive CEBL U Sports player of the year award. The rugged downhill guard appeared in 16 games, earning nine starts to finish the season with respectable averages of 7.6 points, 3.3 rebounds, 2.7 assists and 1.5 steals in 22 minutes.

Although not common, we’re now starting to see U Sports basketball players test the NBA Draft. Former Ottawa Gee-Gees second-team All-Canadian Warren Ward (London, Ont.) was the first U Sports player to declare for the NBA Draft in 2013.

More recently, Ryerson Rams seven-foot-two Senegalese import, Tanor Ngom and two-time U Sports player of the year Kadre Gray of the Laurentian Voyageurs attempted to draw the eyes of NBA teams in 2019. Caleb Agada (Burlington, Ont.) another former Gee-Gees All-Canadian standout joined Philip Scrubb as the only two U sports players to play in the NBA Summer League.

The likelihood of Pandi or another U sports player hearing their name called out on draft night is still far away, but it’s clear that the U Sports to NBA path is being established for future generations to make the leap.

Marial Shayok, selected by the Philadelphia 76ers in the 2019 NBA Draft, is the second local Ottawa basketball player drafted into the NBA and the first to ever play in the NBA. Olivier Hanlan (Aylmer, QC) another player that was heavily recruited by Dave Smart and the Ravens in 2012 was selected by the San Antonio Spurs via Boston College in 2015.