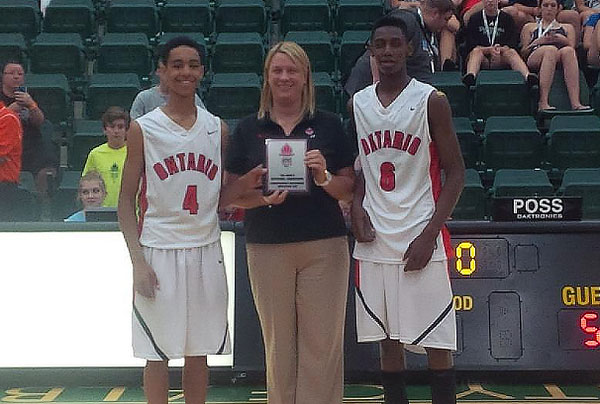 When it comes to Canadian basketball bragging rights, there is no doubt that the province (state) of Ontario dominates the ranks. Toronto and the Greater Toronto Area (GTA) more specifically is single-handily responsible for more players heading to the NCAA and NBA ranks than any other province in the country.

Quebec is certainly no slouch, producing its fair share of talented players at all levels as well. Therefore, when the two provinces clash on the basketball court there is no doubt that talent will be in abundance, and more importantly future NCAA and NBA stars will also be on display, as was the case for the 2014 U15 Canadian National Basketball Championship in Edmonton, Alberta.

Class of 2019 and current eighth grader Rowan Barrett Jr., the son of former Canadian Senior Men’s National player and current Canada Basketball executive Rowan Barrett, put on a show for the entire country to see, scoring 27 of his game-high 37 points in the second-half to lead Team Ontario to a convincing 93-53 victory over Team Quebec to claim their seventh straight U15 Canadian National Basketball championship at the Sackville Sports Centre.

With the score tied at 30-30 at half-time Ottawa’s rising star Lloyd Pandi helped Team Ontario race out to a 12-2 run by scoring the first six points for his team and the first double-digit lead of the game at 42-32, from there Rowan Barrett Jr. took over and dominated after only scoring 11 points in the first-half. Team Ontario made some adjustments at half-time to limit Quebec to just 23 second-half points in the runaway victory and continue their dominance at the U15 level.

Montreal’s Junior Farquhar was finally held in check after torching Team Ontario for 36 points in their second pool game of the tournament, a game Quebec dominated and beat Ontario 87-80. Farquhar, a silky smooth point guard continued to show flashes of brilliance by scoring 15 points in the first-half, finishing with 21 points and seven rebounds and first-team all-star nod.

RJ Barrett shot 17-for-25 from the field, 3-of-4 from the free-throws and grabbed seven rebounds to claim the Most Valuable Player (MVP) award. In five games with Team Ontario Barrett’s length, athleticism and overall feel for the game proved too much for the opposition, finishing as the tournament’s top scorer with an average of 26 points per game, 7 rebounds, 1.8 assists and absurd 62.1% shooting from the floor.

It’s very early in the process, but expect RJ Barrett’s stock to continue to rise rapidly, based on this tournament he might be the one prospect in Canada that has the potential to one day come close to reaching Andrew Wiggins status, if that is ever possible!

Team Ontario’s run to the championship was largely due to the stellar play of Andrew Nembhard (Aurora, Ont) who displayed all the right attributes you would want to see in a young point guard. Nembhard’s ability to run a team and play under control was key, adding 18 points and two rebounds in the championship game, and was well deserved recipient of a first-team all-star award.