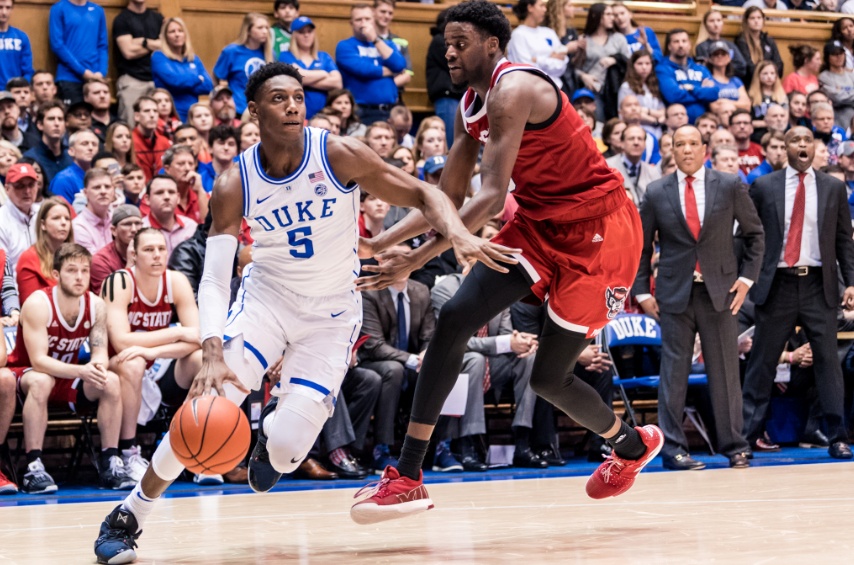 The No. 2 Duke Blue Devils continued their March towards the Madness with a 94-78 win over the visiting the North Carolina State Wolfpack.

Barrett took full advantage of his 37 minutes on his way to his first collegiate triple-double with 23 points, 11 rebounds, 10 assists and an impressive zero turnovers.

Barrett’s efforts put him in elite company as only the fourth Duke player to reach the feat and the first Blue Devils’ triple-double since 2006. And if that wasn’t jaw-dropping enough, he is also the first Duke Freshman to do it since Gene Banks did it way back in 1987.

Even more impressive, is that fact that well over 2000 plus Canadians in the past 35 seasons have registered their names on official NCAA basketball scoresheets, but only one other was capable of accomplishing the elusive feat.

One would’ve to dig up and dust off the cobwebs off the Syracuse Orangemen record books to find Leo Rautins’ name.

Rautins’ a Canadian basketball prodigy of his own, is responsible for the last Canadian triple-double BasketballBuzz could find against NCAA division one teams, with 13 points, 13 assists and 11 rebounds against Boston College on February 19, 1983. A talented Rautins notched three career triple-doubles in two seasons, including two in less than 40 days apart.

Recently, several Canadian players, including Barrett himself, have come close to adding their names to the conversation. R.J. nearly missed out with the most dominant game of his career, 23 points, 16 rebounds and 9 assists. Duke’s only second loss of the season as they fell in overtime 95-91 to the same head coach that coached and recruited Rautins, as the Syracuse Orange pulled off the upset on January 14, 2019.

Montreal’s Khem Birch (Orlando Magic) nearly took down the record on three occasions during his second season with the UNLV Rebels, including an 11-point, 12-rebound and 9 block outing versus New Mexico on February 15, 2014. Birch, a shot-blocking phenom also had two other games with 8 blocks and finished his career with 211 swats in just 53 NCAA career games, translating to an unheard-of 4 blocks per game.

With so much talent surrounding R.J. Barrett, it wouldn’t be surprising if he notched at least one more triple-double before his collegiate career is enshrined as the best ever by a Canadian.

Note: For clarification purposes, Godwin Boahen (Toronto, Ont.) a Junior point-guard from the University of Illinois-Chicago Flames officially recorded a triple-double during his freshman season (2016-2017) against National Association of Intercollegiate Athletics (NAIA) Roosevelt Lakers’ putting up 13 points, 12 rebounds and 11 assists in only his 13th game on December 22nd, 2016. However, given that this game wasn’t against official NCAA competition, it was therefore excluded.