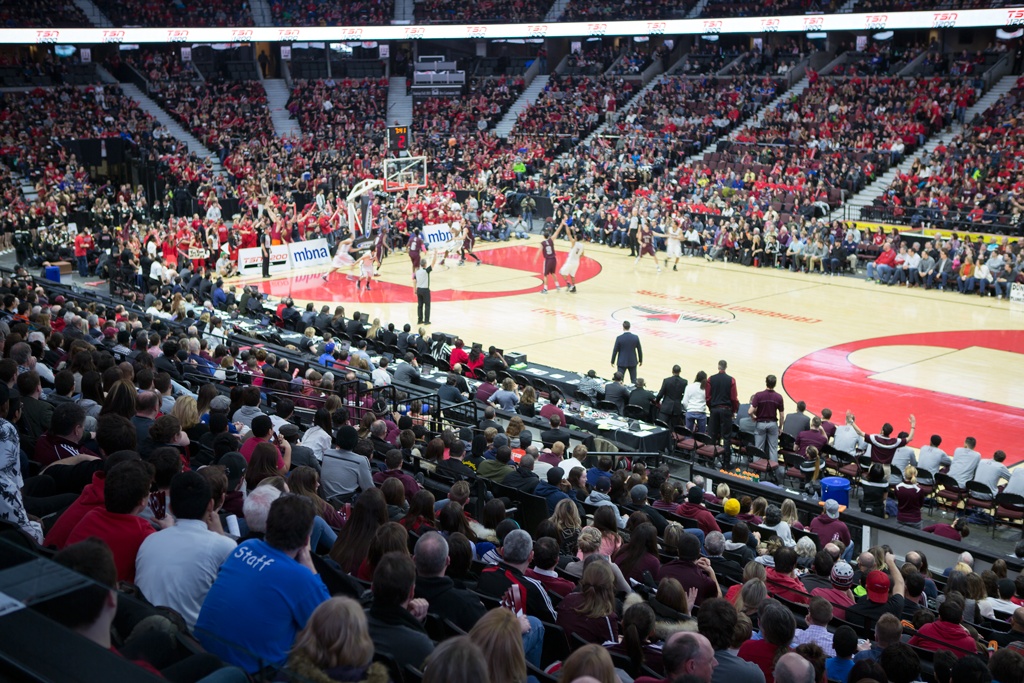 Ottawa, ON – The Carleton Ravens and the Ottawa Gee-Gees have provided local Ottawa basketball fans with a long list of memorable and historic moments since their heated rivalry began in 1975. Over the course of the past 40 years local pundits have experienced the dominance of the Dave Smart Era, a National championship game between the two rival schools in their home city, but never has the Nations Capital or the Canada, for that matter experienced anything like what went down on a cold Saturday February night inside the Canadian Tire Centre (CTC).

With the home of the NHL’s Ottawa Senators packed all the way to the third-bowl and both school colors on full display the No. 2-ranked Carleton Ravens behind a decisive fourth-quarter knocked off the No. 1-ranked Ottawa Gee-Gees 79-66 in front of a record breaking CIS / U Sports basketball crowd of 10 780 passionate fans in the ninth edition of the Annual Capital Hoops Classic.

Fourth-year Ravens’ forward Thomas Scrubb dominated from tip-off, racking-up his sixth double-double of the season with 29 points, 12 rebounds and 4 assists in a rematch of last year’s CIS / U Sports Men’s Final 8 Championship game at CTC which drew over 7000 fans.

The Gee-Gees had no answer for the Victoria, BC native, specially in the second and fourth quarters, scoring 11 and 10 points respectively in a pressure cooker game which had the feeling of yet another national title game. “We just wanted to more aggressive this time, we thought last game we were tentative and didn’t really attacked them, we know we have good match-ups on offense we just wanted to go at those match-ups and we had success doing that tonight.” discussed Thomas Scrubb during his post game interview with BasketballBuzz.

Gee-Gees all-time leading scorer Johnny Berhanemeskel put on a show in his last Capital Hoops Classic with a game-high 28 points on 10-of-17 shooting. Berhanemeskel toasted the Ravens’ in the opening quarter and electrified the record CIS / U Sports crowd in the third-quarter as the Gee-Gees took their first lead of the game at 54-51 on a sweet three-point play.

As usual, in a game of this magnitude, officiating and how the referees call it early usually dictates the flow and the pace of the game, and on this special night it was no different!

Gee-Gees head coach James Derouin took a long pause before giving us his opinion on how the game was called, “Long pause…I thought some big calls in that first-half, overall I thought it was fairly even, But I thought the big calls were Caleb’s second in the first-half, in the first 30 seconds of the game that really throws off our game plan obviously hes a major part of what we do.”

Carleton Ravens head coach Dave Smart, who was in much better mood after his team’s victory also expressed his feelings towards the officiating, “well I think I did an absolutely horrible job in the first game letting stuff slide, we got called for some soft ones, they got called for some soft ones but generally the travels were called and the guys that were in foul trouble fouled! I know James (Derouin) isn’t happy but Caleb fouled, and our guys also fouled.

Three-time CIS / U Sports MVP Philip Scrubb shot the ball poorly once again on the big floor, going 0-for-8 from deep but finishing with 13 points, 6 rebounds, 5 assists and one turnover in his last 39 minutes of Capital Hoops action.

“For us being up one after three quarters against them in the state were in physical it was a win, if someone had told me that you are going to fourth quarter with a one point lead, they got Mike (L’African) back and we don’t have four guys, one starter, and they are better than us when we’re both healthy, were taking it.” added Smart.

Gee-Gees starting point guard Mike L’African return to action for the first time since the Gee-Gees knocked off the Ravens’ in their thrilling 78-76 win and was rock solid with 11 points, 7 rebounds but failed to record an assist as Ottawa struggled with ball movement — recording only 9 assists compared to Carleton’s 16.