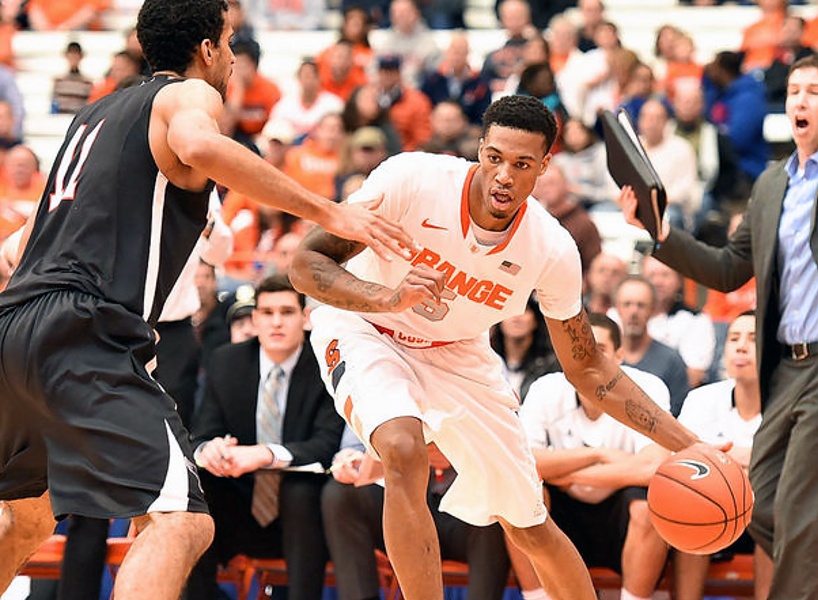 Syracuse, NY – The Syracuse Orange behind the stellar play of freshman point guard Kaleb Joseph fought off a 15 point first-half deficit to defeat the Carleton Ravens in-front of 7,812 fans at the Carrier Dome.

Canada’s ten-time university champions came into the game with a 10-1 pre-season record, rocking victories over the Memphis Tigers (2x), and Vermont Catamounts, Illinois-Chicago Flames,  a close 10-point loss to the Indiana Hoosiers.  The Ravens weren’t shy of their intentions of wanting to add the Syracuse Orange to the long list of NCAA division one programs to fall to Dave Smart and the Ravens over the last 16 years.

Carleton ripped off an early 10-0 to grab control of the game for 13-4 lead and found their shooting touch again with another 12-0 run late in the first-half when Syracuse cut the deficit to 23-21 to take a 39-30 lead over the Orange at half-time.

Syracuse’s 8-0 run to begin the second-half changed the tone for the remainder of the game as the orange pounded the ball early and often to Rakeem Christmas established himself and sliced into Carleton’s lead at 39-38. Unphased by the Orange’s height advantage Carleton responded withe their own 8-0 on triples by Raso and Gavin Resch at 45-38 with 14;47 to go in the second-half.

The Orange grabbed the lead on a Ran Paterson dunk  with 11:20 to play in the game and never allowed the Ravens to jump ahead despite several ties Thomas Scrubb’s best efforts to lead Carleton to victory.

Syracuse was paced by freshman Kaleb Joseph with 19 points and four assists on 7-of-9 shooting. Paterson added 15 and Chris McCullough finished with 14 points and 5 rebounds.

The Ravens shot themselves in the foot by shooting a uncharismatic 5/13  (38.5%) from the free-throw and out-rebounded the Orange 45-31.

Carleton finishes the preseason schedule with 10-2 record with losses to the Indiana Hoosiers and Syracuse Orange. The Ravens hit the road and open-up OUA regular season play with a tough road trip against the improving Brock Badgers and McMaster Marauders.