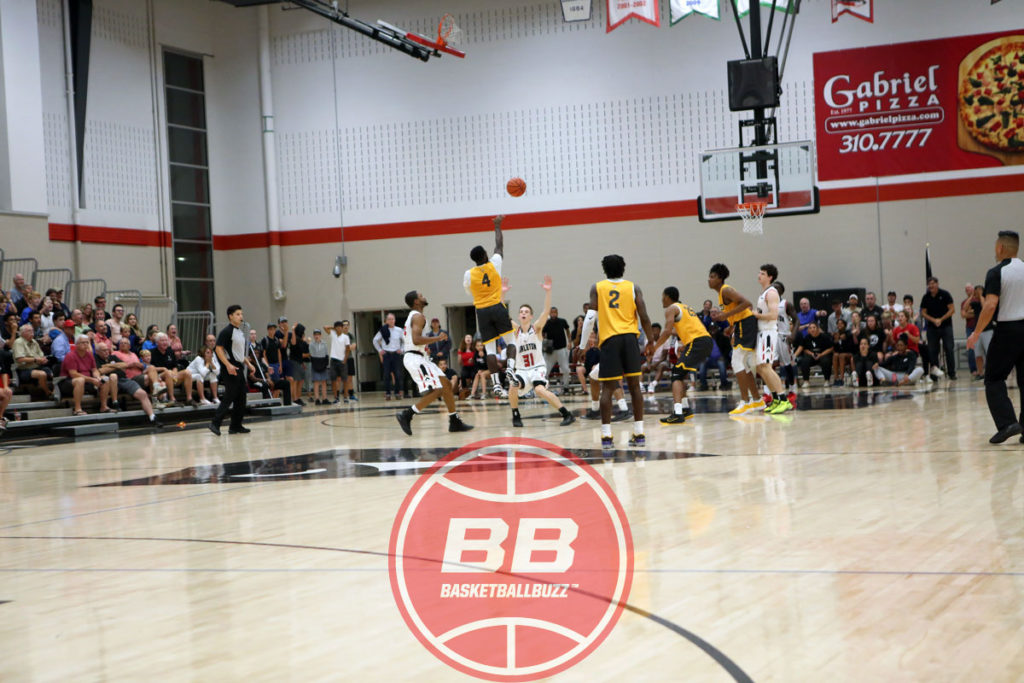 Ottawa, Ont. — It was one for the ages at the Ravens’ Nest as Canadian Daniel Sackey drilled a running one-footer at the buzzer — helping the visiting Valparaiso Crusaders sink the 14-time defending Canadian university champions Carleton Ravens 83-80 in overtime — ending their unprecedented 12-game winning streak over NCAA division one schools.

Sackey, a 6’1″ sophomore point guard from Winnipeg, Manitoba found himself with the basketball in his hands at the top of the three-point line after a wild sequence of events which included missed foul shots and two forced turnovers in the final 7 seconds of an entertaining and hard-fought August basketball battle.

“This feeling is ecstatic! Not one of my best games, but it feels good to come home and get a win” – an excited Sackey opened-up post-game and further expanded on how the Crusaders are soaking-up the experience and building their team chemistry on their second Canadian tour.

“Honestly, we were here four years ago and got our butts-kicked by 20 points (77-59) with what I thought was a better team at the time — so we knew what kind of challenge Carleton presented. We have been taking this trip one day at the time and working on getting better as team each day and it obviously feels good to beat a team of Carleton’s status.

Javon Freeman-Liberty at home with Valpo

Talented sophomore guard Javon Freeman-Liberty led a full-team effort with four Crusaders in double-figures with a game-high 23 points, 7 rebounds, 4 assists and 3 steals to beat a Carleton Ravens squad that hadn’t lost to a NCAA team on their home floor since dropping a 76-64 decision to the Towson Tigers on August 7, 2017.

The former Chicago high-school all-state standout and NCAA Missouri-Valley all-defensive and freshman team from a year-ago contemplated leaving the program during the off-season but decided to return to a team that went 15-18 overall in 2018-2019 and is expected to drastically improve in 2019-2020.

“Javon is a great guy and we are extremely excited to have him back and are working hard in developing his game and making sure that he feels apart of the team and community.” added a energized Matt Lottich.

Nick Robinson shot 5-of-6 from the floor on his way to a 14 point, 8 rebound, 2 steals, 2 blocks and Eron Gordon chipped-in with 13 points and 6 rebounds for the Crusaders who improve to 3-0 on their 2019 Canadian tour.

Valparaiso jumped to a 18-14 first-quarter lead by limiting the Ravens to just 4-of-15 shooting in the opening 10 minutes, and further extending the lead to 37-28 at half-time as they outplayed Carleton in every significant aspect of the game.

Carleton Ravens new head coach Taffe Charles and his relatively new coaching staff regrouped after the break by outscoring Valparaiso 29-24 in the third-quarter — knocking down five of the Ravens eight three-pointers and putting on a better defensive rebounding effort to cut the lead to 61-57 through three-quarters.

The fast-pace action came to a halt in a low-scoring fourth-quarter with both teams combining for just 24 points. Carleton continued to battle and knotted the game at 64-64 but trailed 71-66 with 2:00 minutes remaining and managed to send the game into overtime on a late inside basket by Lloyd Pandi.

The Ravens took control of the game in overtime holding a 78-75 lead with 2:29 left to play but uncharacteristically fell-apart down the stretch, letting Valparaiso steal a winnable home outcome. Ravens sophomore guard Aiden Warnholtz stepped-up to the free-throw line and missed two crucial foul shots with the game tied at 80-80 with just under 20 seconds remaining — Carleton managed to grab the offensive rebound but were called for a push-off offensive foul — sending the Crusaders to the opposite end of the court for their own two missed foul shots.

Carleton grabbed the defensive rebound and called a timeout with 7.9 secs remaining in hopes of attempting a game-winning shot. Facing full-court pressure and attempting to inbound under their own basket Valparaiso’s Freeman-Liberty forced Carleton to turn the basketball over twice setting — up the wild and fittingly game winner from the kid from Winnipeg, Manitoba.

“It’s August, we have a new coaching staff and a new group of players. We are trying to find new roles for players as well as coaches – discussed Ravens Head coach Taffe Charles after the disappointing loss.

Valparaiso’s 54-48 out-rebounding of the Ravens was a point of emphasis post game for the Ravens head coach.

Carleton was paced by Munis Tutu with 18 points, 5 assists and 3 rebounds and got a solid performance from freshman duo Lloyd Pandi (Ottawa, Ont.) 10 points, 5 rebounds, 3 steals and Elie Karojo (Montreal, Que.) with game-high 10 rebounds and 7 rebounds. Marcus Anderson nearly missed out on a double-double with 9 points and 9 rebounds.

The Ravens were without the services TJ Lall, a 6’6″all-conference senior forward who averaged 12.5 points per game, 5.8 rebounds in his junior campaign. Starting point guard Yasiin Joseph only played 10 minutes, scoring 8 points and grabbing two rebounds as the coaching staff got a look at various new faces including last minute NCAA transfer in Ivan Cucak a third-year 6’11” junior center from Austin Peay State University.

Cucak (Kitchener, Ont.) played well in limited action, adding 8 points, 3 rebounds and 3 assists in 14 minutes and forced Valparariso to go big and match-up with their own Canadian 7-footer in Ben Krikke (Edmonton, AB) who finished with 4 points, 3 blocks and 2 rebounds in 14 minutes.

It felt just like the good ol’days with former head coach Dave Smart opting for a seat at the back of the Ravens’ bench rather than the front. Smart called it a career after winning his untouchable 14th Canadian university basketball championship in 17 years and has take a role of basketball operations with both the men’s and women’s basketball programs.

The Ravens (1-1) beat the University of South Florida 78-69 in their preseason opener in Laval, Quebec and will look to start new winning streak against NCAA opposition when they take on the University of Albany Great Danes on Sunday August 18 at the Ravens Nest.

Valparaiso who went (2-1) in their 2015 Canadian tour will wrap-up a successful 2019 edition with another tough match-up against UQAM in Montreal.