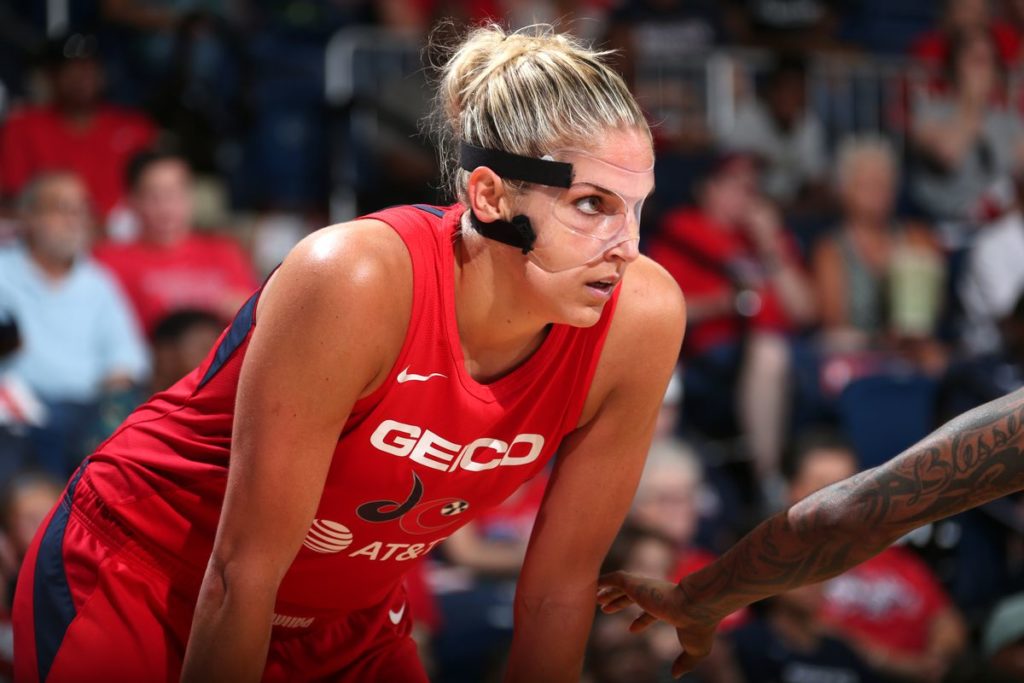 Elena Delle Donne With The Most Valuable Face Mask

Vegas may have all the chips with the Sin City Aces and Hollywood the L.A. big-three with Candace Parker and the Ogwumike sister, sisters. Whilst the team they just beat Seattle, a storm of legacy making to legendary players, from Breanna Stewart to Sue Bird. Herself making sport, entertainment and all inclusive headlines for her off-court partnership with US soccer star and World Cup MVP winner, Megan Rapinoe.

But it’s D.C. that have the capital star as Washington’s mystifying Mystics Elena Delle Donne is the Most Valuable Player for the second time.

EDD MVP of the WNBA.

And she did it all nose to knee injury.

Detroit Piston Rip Hamilton made the face-mask famous. And then ‘Star Wars’ super-fan Kobe Bryant became the Phantom Menace when he wore one for a bit, mauling his man like a Darth Sith lord. LeBron also had his own black, Bat Bron (Happy Batman Day caped crusaders), phantom opera during his time behind plastic like a Hollywood star for the theater.

Even the dunking muscle of Russell Westbrook brought some Bane brutality to his. This trademark trend just seems to bring the beast out of the best. You remember how Bird flew through the black eye of the Storm last year with one? And now you can add MVP Elena Delle Donne to the face mask Hall of Fame.

And famous fans were even wearing matching masks in support solidarity as the back-court brotherhood of the NBA’s Washington Wizards John Wall and Bradley Beal sat court-side, faces sweating.

“Thank you to the people who made my mask and my knee brace. There should seriously be MVP awards for them”, Delle Donne told Twitter later in an acceptance speech thread of humble thanks.

Elena kept the face mask on after her nose healed because…well you know it’s inspiring and intimidating and cool as hell. But the knee brace has been a God send Most Underrated Player Of The Season. After her nightmare playoff injury against the Atlanta Dream last year, this sleeve holding her leg together cap to joint has helped the reawakening of a legends career.

Even without the MVP or LL Cool J knockout, bell rocking comeback, Delle Donne was already one of the greatest WNBA players of all-time…let alone the right now G.O.A.T.’s. But take a look at her now.

She just may be one of the games greatest. Counting either gender.

How’s the first player in the women’s game to record 50/40/90 splits in a season suit you?

If you’re not impressed, suit yourself. Because Delle Donne don’t care. Right now she’s focusing on bigger things. Like beating the house in Las Vegas following her Game 2 win against the Aces. And after Hamby’s miracle roll from half-court against Elena’s former team the Chicago Sky, it’s time for the MVP to run it back in revenge.

Now that would really be an ace in the hole.