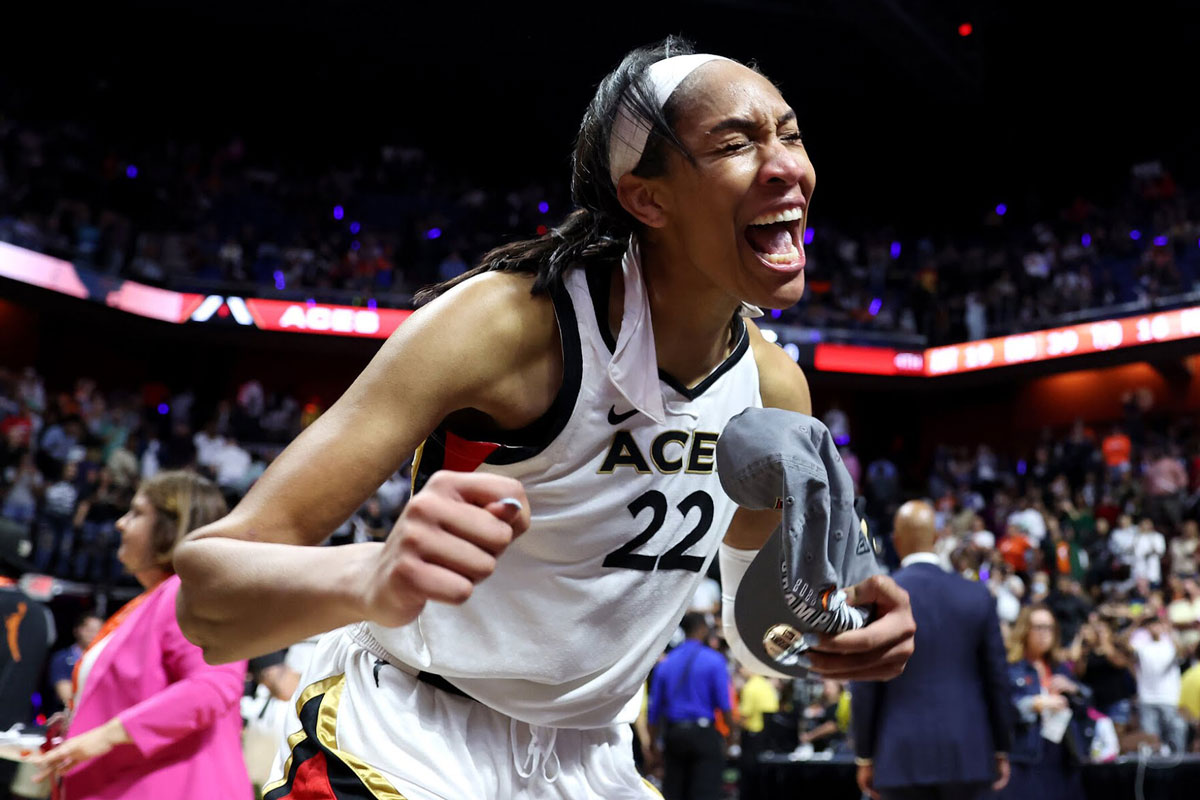 Rookie leader Becky Hammon has just become WNBA Coach of the Year and champion in her first year at the helm. All after a mid-season Commissioner’s Cup win.

Two-time MVP A’ja Wilson raised the ante on her doubled-up Most Valuable and Defensive Player of the Year awards, by adding her first ‘chip to her winnings.

Former champ Chelsea ‘Point Gawd’ Gray became an actual God, winning the Finals MVP (to go with that Commissioner’s Cup one) for another ring, after a historic series performance.

Kelsey Plum added a trophy to her cabinet that features this year’s All-star MVP, and a 3×3 Olympic Gold from Tokyo. Crashing the post-game presser, dancing with her boom-box.

And the city of Las Vegas won their first-ever professional sports championship for their sins.

It hasn’t been this explosive since they tested nukes in the desert.

But going atomic, Jonquel Jones and the shining Connecticut Sun finally set after a hard-fought series that in nuance reads better than the 3-1 finale.

Vegas got complacent with a three-game cushion in Game 3, but thanks to Riquna Williams detonating from downtown, they weren’t going to lose that fuse again.

With Williams from deep and Gray from every area. Not to mention Candace Parker leading her hometown Chicago to a Sky high championship last season. What must the LA Sparks be thinking watching all their lost legends?

Well, hopefully pride, for one.

The Aces lost Liz Cambage and even big head coach Bill Laimbeer last year, but none of that seemed to matter this season. In fact, it opened them up to more. Even an injury to key player Dearica Hamby couldn’t stop Vegas from rolling through the postseason.

Must Read:
It Was All A Dream. Candace Parker Sparks Los Angeles Over Atlanta In OT

They beat the GOAT Sue Bird in her last dance, serving up the Storm. And now they’ve just aced the big one, like Serena Williams.

“I worked so hard for this” Gray declared, with 20 points, the MVP trophy and so many tears of joy, as the snowboarding goggles went on for the champagne showers.

And now, there will be reign throughout the whole city as the strip will be painted red, black and gold.

Sin City is used to high-stakes winning, but not like this. This time, Las Vegas won in someone else’s house, too.

We just can’t wait to see what the banner-high Aces bring to the table next.

But tonight, it’s time to celebrate.

With Spain’s EuroBasket Gold, make that two formidable finals in one day. Breaching basketball’s borders, before the big-league comes back. This game was always meant to change. You’re now witnessing its next classic chapter, flipping the script.