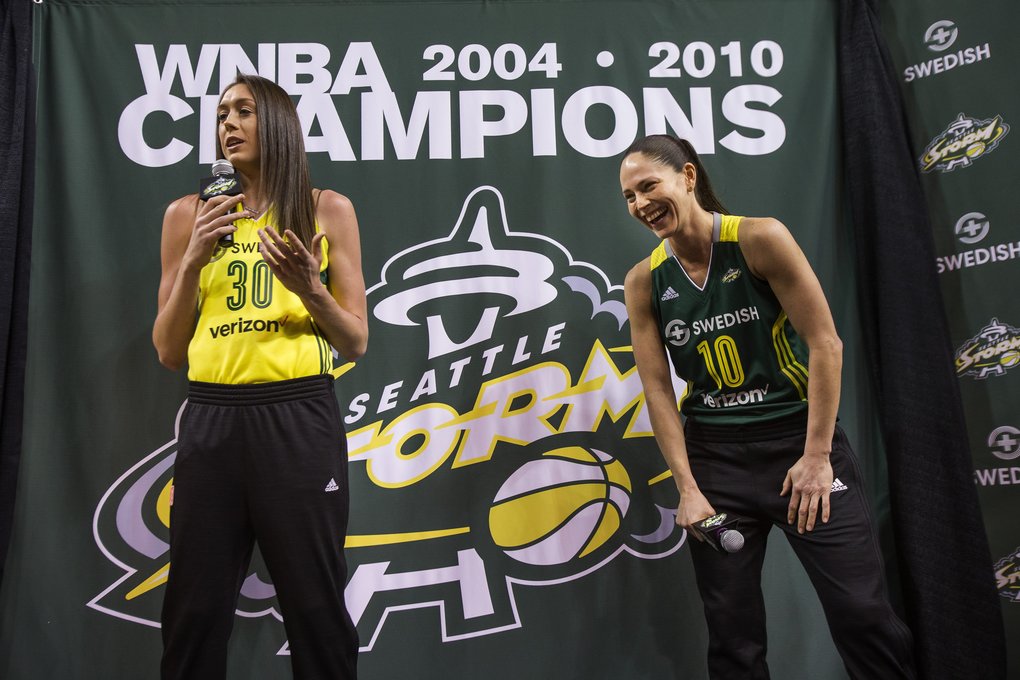 Are Seattle Set To Storm The WNBA Again?

Are you listening Seattle?

Beneath the cities Space Needle lies the Key Arena. The former home of the former Seattle Supersonics. Stolen away by Starbucks owners when they should have been saved like Seattles best coffee. Now reigning in the NBA as the Oklahoma City Thunder and their electric, striking duo of Kevin Durant and Russell Westbrook. A tandem and team that could even go to war with Steph Curry’s big three, Klay and Dray Golden State Warriors to dub themselves potential NBA finalists and even champions…let alone Western ones.

But even if they win…look at what they’ve lost.

Now the ‘Jurassic Park’ visitors centre looking Key Arena lies within a forest of trees that you’d have to hack your way through like Shaq to get to. You can imagine a falling banner in here reading; ‘When The Supersonics Ruled The World’. This place used to fit like Gary Payton’s glove, but now OKC is new world like Galaxy Guardian Chris Pratt. There’s the bones of legend here. Skeletons in the locker room. Even a dinosaur like the T-Rex legendary Shawn Kemp has a bar just down the road in the Queen Anne district. Oskar’s Kitchen serves up beer on tap, tatter tots and a lot of nostalgia between those green and yellow jerseys found behind the bar with the spirits.

This is Macklemore’s city now…and he’s only sharing it with Ryan Lewis. Downtown if you want to find a Sonics jersey you may just have to go thrift shopping with your grandads coat.

But wait…is that rain?

Forget the Thunder. There’s a real Storm coming. Green and white basketball is still shining in the key of the Emerald City and we aren’t talking about the return of the Sonics like a Sega blue hedgehog…yet! Ring bearing, Anne’s district is fit for some queens and as the white and orange ball is thrown up for the new WNBA season the 2004 and 2010 champion Seattle Storm have their eye on the throne.

Sure they just got ignited by the Los Angeles Sparks at STAPLES, to a 30 point, 96-66 candle, lead by purple and gold party starter Candace Parker. But that’s just one rusty, season opening game on the road this team needs for it’s drive. Meanwhile the Womens National Basketball Association is working with stories on new greats like Tulsa Shock’s Skylar Diggins taking wing with this teams move to Dallas. Or the staying power of Lisa Leslie legacy making legends like Diana Taurasi and Tamika Catching. But Seattle have one of their own in green and white (make that Swedish lime and green now) too, taking wing like another 3-ball shooting Larry legend with the same name on the back of the jersey.

Point God Sue Bird is one of this games greatest. Male or female. And her basketball I.Q. has still got plenty left in reserve before she takes one final victory lap walk to the bench she’ll one day sit as a coach we’re sure. She’s more Seattle than a Payton tossed salad to Kemp’s scrambled egg. She’s part of this great cities grammer like Frasier Crane’s fictional radio show. Going ahead, Seattle also think Jewel Loyd could be the most improved player in this league out of the Emerald. Run it Jewel!

But it’s all about Stewie. No we’re not talking about ‘Family Guy’, but this franchises new member about to kill a league of Lois’. Running the lane like a Superwoman, taking flight with two ‘S’s’ on her chest. The number one pick in this years draft who really is set to be the biggest player in the WNBA this year and Seattle’s best one since the rule of legend Lauren Jackson. The fourth consecutive NCAA winning champ Breanna Stewart is going forth in Seattle after cutting down nets with UCONN. And you can expect the Sports Illustrated cover star without the swimsuit to strip more nylon. The baskets are loaded…the ball is hers. The future is in her hands. Queen Breanne District. Hand her the keys to the city…let alone the arena.

Must Read:
We Need To Talk About Kevin Love's Conversation About Mental Health

And just watch her work!