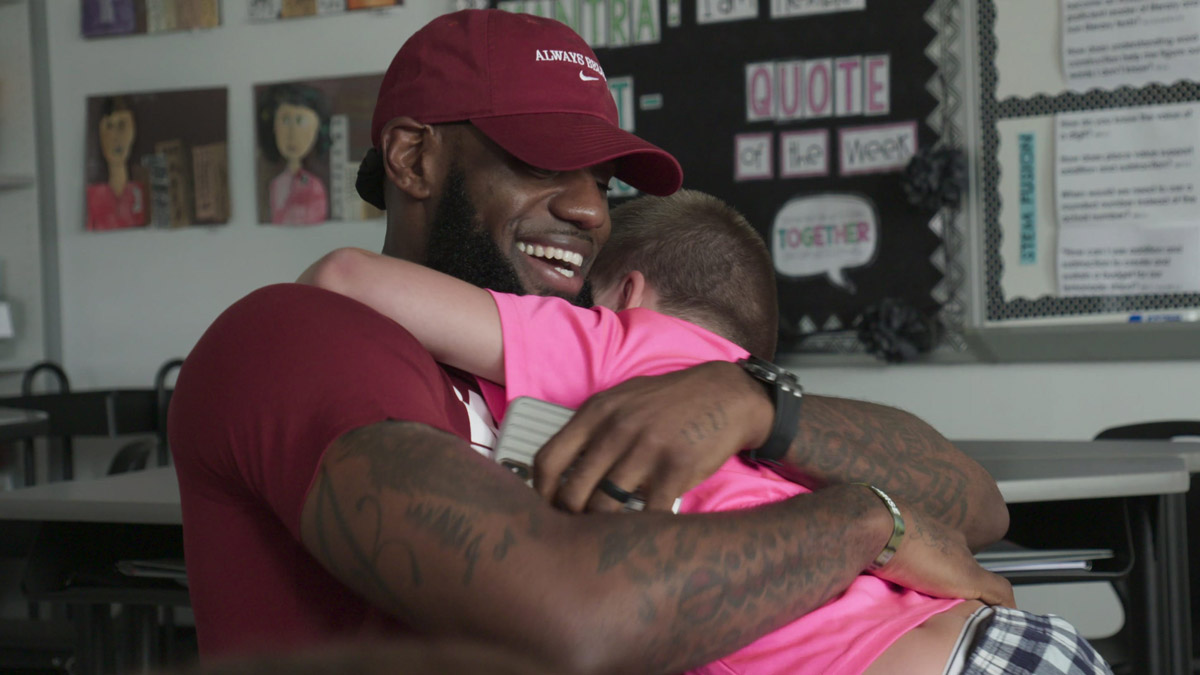 Lebron James I Promise Documentary Vows To Leave No Kid Behind

DTLA. Down three with that many seconds on the clock and the game on the line. Would you trust King James to make a play for the Lakers?

But every 26 seconds. That’s how often a kid drops out of school in the USA. Forget chasing an all-time scoring record. This is a statistic that needs to be run down. Right now.

Imagine what that does to kids lives and the livelihood of their futures.

Teachers and leaders like LeBron James want to change all that.

In 2018 he made a pretty big move towards that goal like when he bulldozes the lane time and time again. Under construction, this kid from Akron built a school in his hometown of Ohio. Seeking to serve under privileged and at risk children and offer them an opportunity that previously and economically wouldn’t have been made available to them.

Struggling students who just need to be given a chance.

We all know the headlines and social media buzz that announcement made that summer July day, but what happened next?

This SpringHill Company documentary that you can watch for free online like Luc Longley’s ‘One Giant Leap’ shows us exactly what. A YouTube original executive produced by ‘The Shop’ HBO team of King James and his childhood friend Maverick Carter, who most recently produced the Netflix ‘Naomi Osaka’ doc and are working on a ‘Black Ice’ hockey project with certified rapper and Raptors ambassador Drake.

Whilst ‘Bron’s former rookie rival and new LAL teammate Carmelo Anthony is currently lining bookshelves with his memoir for the streets, ‘Where Tomorrows Aren’t Promised’, the King is dominating screens like he does the pick and roll. Promising a future for the tomorrows of his Akron alumni.

A show also ahead of another new superstar Laker teammate Russell Westbrook’s own ‘Passion Play’ documentary, premiering tomorrow on Showtime (how apt).

Must Read:
LeBron vs Zion. A Tale Of Two Cities

Forget the big, out of this world ‘Space Jam’ blockbuster. Debuting at the Tribeca Film Festival, here’s the movie of the season that moves for his legacy and all the new teammates that are a part of that.

The teacher and students that like his t-shirt says are one and a family.

This is more than a one year deal. These kids will be back again and again. Just like Dwight Howard with a Magic smile.

Number 6 may be the face, but each one, teach one, it’s all about the students and the real leaders that guide them. You’ll see ‘Bron in this production, he’s more than the money, he’s hands on. From meetings to morale making surprise visits. As involved as much as he cares and believe me…that’s a lot. But he takes a backseat to the real stars of this show, the people in school.

You’ll fall in love with kids like Scout, Nate (who went viral on the King’s IG) and many more like the Halloween loving Vincent who even had a better Pennywise costume than the King. Watching James and Vince chop it up about horror movies is a joy. You’ll be rooting for all the pupils like the teachers you wish you had.

This makes me want to become a better one as we can all learn something here. Sure there are hard times at the school, but a promise is a commitment to keep striving and surviving the good fight, even when it seems like nothing’s working.

And that is a notion that even most NBA teams could learn from. Let alone some schools taking in the inspiring stories and influential messages read into this special.

I promise you’ll be better off for watching.

A new class is in session.

Don’t be late for roll call.