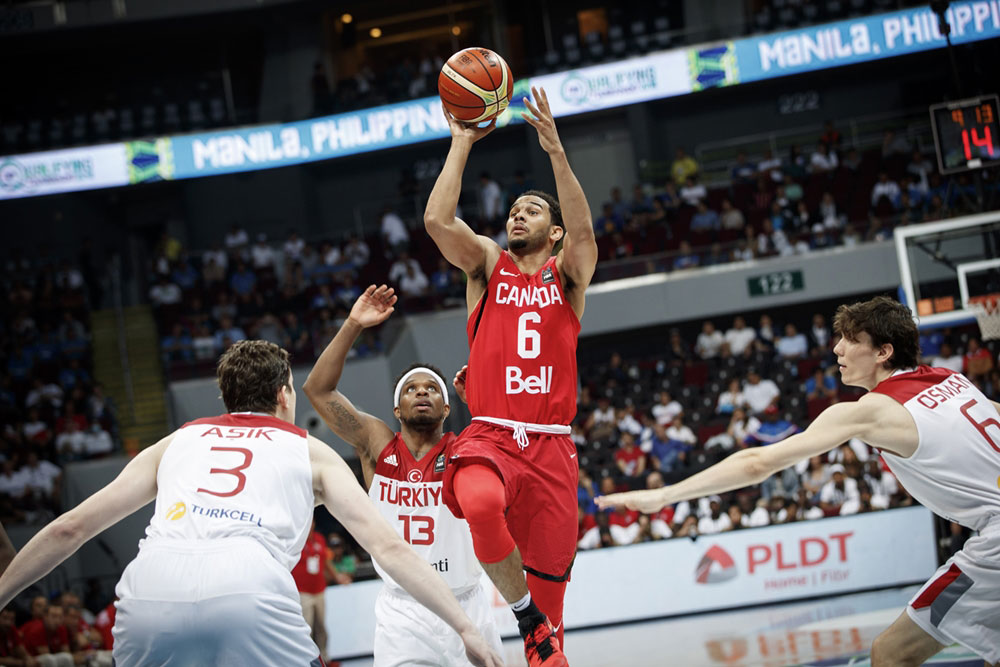 Team captain Cory Joseph demonstrated his leadership role admirably in Canada’s opener in Manila, as he scored 21 points all in the first three-quarters to lead his team to a significant 77-69 win over Turkey to start the tournament.

Tristan Thompson, a late addition to the team, looked a bit rusty with just 10 points but on a night when Turkey struggled mightily from 3-point range (23 percent) and the free-throw line (19-of-34) it was enough to keep the Turks at bay for most of the night.

Turkey hit on just 3 of 18 of their 3’s through 3 quarters and despite hitting a pair in the game’s final minutes, it was their misses as much as anything that allowed Canada to remain in control.

Turkey’s 8-0 run late in the 3rd quarter to cut a 16 point lead in half gave them a glimmer of hope, but that’s when Joseph did his most important scoring of the night. His 11 points in the 3rd included multiple baskets late to fend off that turkey push.

Surprising performances came from the Scrubb brothers with a combined 19 points and Khem Birch leading the team with 7 rebounds in just over 11 minutes of action.

Canada’s emphasis on pushing the ball against the less mobile Turks frustrated their opponents, helping force Turkey’s hand in limiting NBA veteran Omer Asik to only 10 minutes in the game. His poor free throw shooting (2 of 6) didn’t help matters either.

Turkey’s pressure rattled Canada late in the game as noted by Joseph in his post-game comments, but his point guard leadership late along with Tyler Ennis did enough to keep the Canadians ahead by at least two possessions down the stretch.

Canada will aim to round out the group stage by finishing a perfect 2-0  with a win over Senegal on Wednesday at 6:30am EST.