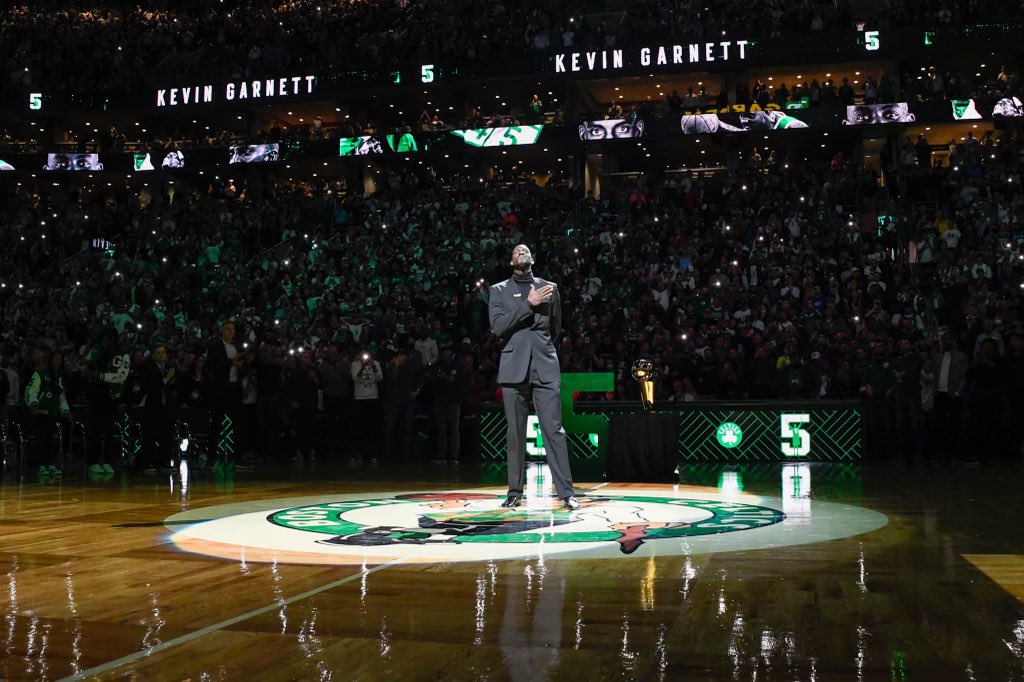 Names like Red, Bill and Bird need no more introduction. No one comes close to them like an Auerbach cigar, ashes to ashes. The legendary Boston Celtics franchise is as storied as their parquet floors. And now when you look up from there you can see one more like the banner Da Kid helped raise.

“ANYTHING IS POSSIBLE!” Screamed Kevin Garnett like, “Cleveland, this is for you”, but with Celtic pride. Back when the C’s won the chip. The legend of Larry like Bird for O’Brien. Shouting with the strength of Boston all the way to the ceiling he broke through where his number 5 now resides.

Tonight, the Boston Celtics immortalized Kevin Garnett in the real garden of basketball Eden, and what a green day it was.

The halftime show was quite the big ticket for KG and them. So much so, a special guest joined Paul Pierce and Celtic company like a hidden gem. One third of the former Boston big-three and former foe, Ray Allen was in the house in downtown Boston. After the holy trinity of shamrock hoops made nice at the NBA 75 team unveiling this All-star game in Cleveland.

The only thing we love more in basketball than a celebration, is a comeback story.

A gregarious Garnett even gave it up for reunited teammate Ray during his rafter raise speech. “You’re next”, he said in reference to Allen’s 20.

Like big Kendrick Perkins (also in attendance) says, “carry on!”

As the center court spotlight shone down on the luck of the Irish, the ticket of Garnett was the biggest reason Boston’s big-three took home that banner that his name is now neighbour too. He was the passion catalyst of change that brought the good times back like smoke in the ceiling. That signature scream setting the roof on fire.

Sure the Celtics lost to the Mavs tonight, but none of that mattered with legends in the building like Bill Russell, Kevin McHale, Rajon Rondo and the one and only Brian Scalabrine serving as MC for the Celtics MVP.

“Seems like a long time ago that you and I were in that gym in Chicago before the draft. You’ve come a long way, big fella, and I couldn’t be happier or more proud of you for your career and everything you’ve done”, McHale who was with him back in the Minnesota days, added.

But Bill had the best word when talking about Kevin.

“Kevin, welcome to the club of Celtics. I’m glad to see you’re now a member of this elite club. Always enjoyed watching you play. And now our jerseys hang together in the rafters. As you once said: ‘Anything is possible.’ Congratulations.”

Just like Garnett’s Adidas campaign once said, “impossible is nothing.”.

Oh how this garden’s hollowed ground grows now they’ve got 5 on it.