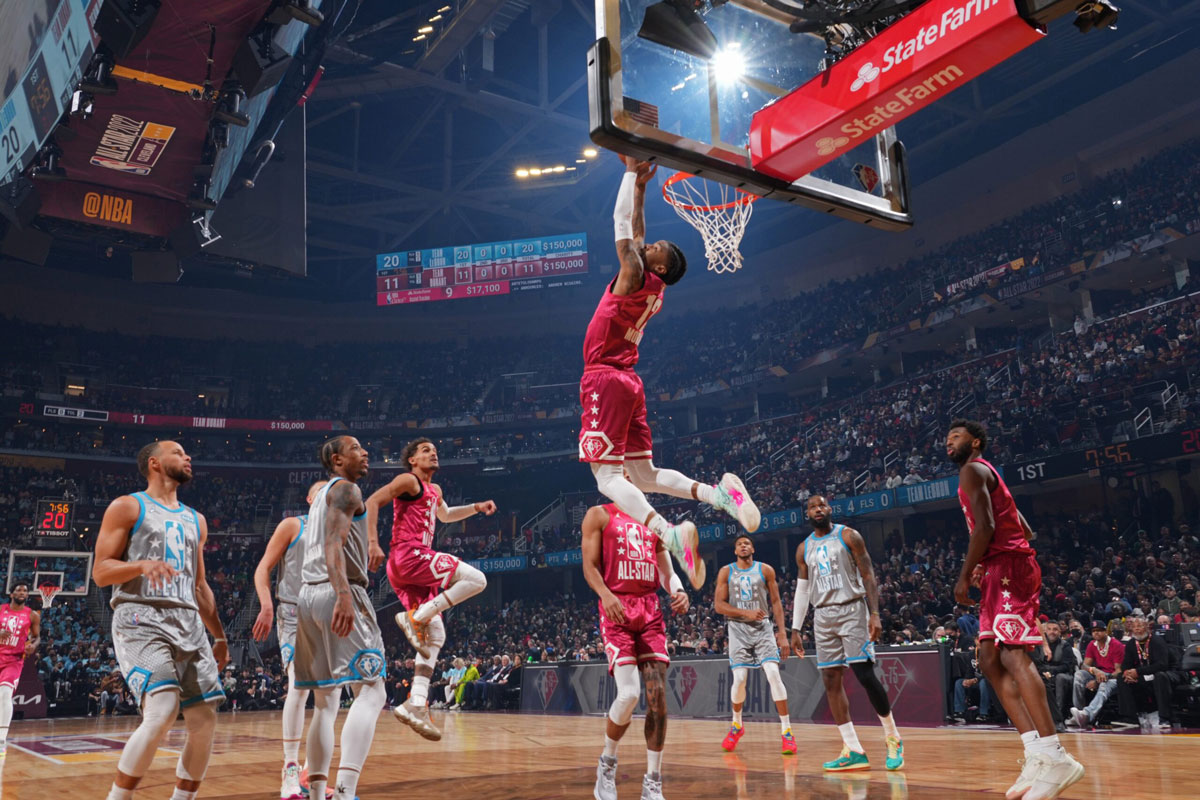 Welcome to the land of the 2022 all star game

CLEVELAND! That was for you!

One homecoming King had the last word. But another of hoops hotbed Akron, Ohio’s finest came away with the Most Valuable Player (MVP) and the new Kobe trophy for his cabinet.

Since we left the concept of East vs West, a now 5 and 0 Team LeBron may have won the game on a James fadeaway dagger, that like Mike or Jay-Z’s ‘Hola’ Hovito’ was perfect. But it was Steph Curry with the shot, a sweet sixteen times over, that really kept them in it against Team Durant, with Kevin absent due to injury.

An all embracing Reggie Miller, Dwyane Wade and Allen Iverson in the commentary box, fresh off their 75th coronation, absolutely loved it.

First to 163. Off a rare Curry miss in this game, Chicago’s Zach Lavine made it a one possession game. That’s when the returning King who brought a ring home, picked up the ball and called game.

In another Hollywood storybook moment James didn’t rule out another Cavalier reunion to close out his career. But number 6, who has just carried his all-time regular season and playoff point totals past Kareem Abdul-Jabbar, has one mission left. To see his son get drafted and then play with him for one year on the veterans minimum, wherever he ends up.

“My last year will be played with my son. Wherever Bronny’s at, that’s where I’ll be. I would do whatever it takes to play with my son for one year. It’s not about the money at that point.”

What a sweet story, legacy and potential history. Let the sweepstakes begin.

The last time Cleveland held the NBA ASG in 1997, the league unveiled its top 50 players on its half-century anniversary.

On this occasion, before Team LeBron’s 163-160 win against Team Durant, James was seen posing for a picture in the NBA 75th anniversary team blazers with fellow Laker legends Magic Johnson, Kareem Abdul-Jabbar, James Worthy, Shaquille O’Neal, Bob McAdoo and Jerry West. The logo himself pointing to the King, or maybe the space reserved for late, Laker legends Kobe Bryant and Elgin Baylor. Who like Wilt Chamberlain got their just tributes in the halftime 75 list unveiling.

This stirring those Laker and NBA fans to say again that Dwight Howard was robbed of a selection. It’s an impressive cut, but maybe the big-man was snubbed. If that’s so, we can’t leave out the name of another NBA and Laker legend, Gail Goodrich.

LeBron, GOAT on GOAT, was seen getting on famously with Michael Jordan pregame. 23 also played around with Maverick Luka Dončić. The King on the other hand had a Kobe like 24 for the game. But Curry cooked up twice as much with 50. All as reigning NBA champ Giannis Antetokounmpo wind-milled his way to 30. And MVP favourite Joel Embiid had a double, double of 36 points and 10 rebounds for Team Durant.

Must Read:
In Loving Memory Of Kobe And GiGi

One of the highlights of the most instant replayed games of the season had to be the alley-oop connection of Trae Young and Ja Morant, together, running the break. Could this be a future free agent pairing, making music in either Memphis or Atlanta?

The Land of the 2022 and 71st NBA All-star game looked like an instant classic too. From the classic logo uniforms iced out and in Cavalier wine, to the traditional hardwood with the Cleveland skyline surrounding it like the city itself.

But even though the NBA’s version of February’s Superbowl featured their own Brady coming home, Cleveland already have three young Kings ready for the crown.

Not many raw big-three’s have the potential of this trio of young Cavs. But Evan Mobley, Darius Garland and Jarrett Allen put on for their city this weekend. Allen and Garland became first-time All-star’s drafted by LeBron and the rook Evan Mobley led these two to a trophy. Shooting like this was the four point contest in an updated version of the Skills Challenge. One that now features windmills (and we aren’t talking about Giannis) like this was crazy golf. But can you put up with it?

Even though his brotherhood lost, a wide-eyed Thanasis Antetokounmpo loved it. All-star Jimmy Butler did not, on the other hand. Telling Ballsack Sports, “I’d rather watch Rachel Nichols’ Skills Challenge, if you know what I mean.” Damn! We sure do, Jimmy. Bubble talk.

I’d rather watch the DJ Khaled one. Dribbling like Kendrick Perkins in his own warm-up. The Miami super DJ and producer bringing out hip-hop All-star’s like this was a halftime show, not a pregame one. Another one after another one. The best of ‘We The Best’ included Lil’ Wayne, Ludacris and the Queen Mary J. Blige. Fresh off her Superbowl spot with Dr. Dre and friends to go along with her stunning new album, ‘Good Morning Gorgeous’.

Now, a picture says a thousand words and then, these days, is turned into a viral meme. One of Shaquille O’Neal’s reaction to this year’s Dunk Contest was put next to the one of him with a video camera watching Vince Carter honey-dip and go through the legs until he declared, “it’s over!” We can carbon date this one via the electronic equipment. Shaq got in on the act too. Posting a picture of his comatose in a jacuzzi with the caption, “wish I was here, rather than the dunk contest.”

Maybe, we’ve been spoiled. Or perhaps we expect too much. There’s only so many ways you can skin a cat, or jump over someone’s head. This contest should still be appreciated for its art form. Just like the other classic All-star Saturday night mainstay, the three-point contest. This year won by Karl-Anthony Towns in this new age of the big-man. And you love to see it. Especially for KAT.

As for the dunks. We got Magic from Cole Anthony jumping over his dad Greg Anthony in his Knick jersey and Timberlands. Golden State Warrior Juan Toscano-Anderson flying high above the Bay Bridge. Putting on for his city and country, with the Mexican flag added to the name and number of his City Edition jersey. Although he sadly couldn’t make on the Jason Richardson throwback. And Knickerbocker Obi Toppin with the glory. Topping it all off with a one-handed slam, through the legs and tapped off the backboard.

Must Read:
Stephen Curry is the greatest three-point shooter of all-time

There may be fewer celebs in the Celebrity Game than the Dunk Contest these days, but the graffiti and video game jerseys looked like something straight out of NBA Live (the good years) and having two of the NFL’s own Cleveland Browns was all love and respect for the home crowd.

Running back Kareem Hunt was sprinting down court, such as his position, but it was defensive end Myles Garrett who brought out the one-handed highlights like a Harlem Globetrotter. Proving he could have possibly played in the NBA, like LeBron could have been drafted in his league.

These famous faces can actually play as Team Walton routed Team ‘Nique 65-51 with Peloton workout influencer Alex Touissant and his 18 points making good on the MVP. Yet the dunk of the season may just belong to Tokyo 2020 gold medallist Gianmarco Tamberi. Showing Olympian high-jumpers make the best put-back dunkers. Get him in next year’s contest. If you know which one we mean.

Hall of Famers Gary Payton, Isiah Thomas, James Worthy and Rick Barry had their own teams too in the new format of the Rising Stars Challenge. One that now features two first to fifty semi-finals and then one race to a quarter-century for the trophy. The future put on a show like the All-stars they preceded.

Team Barry took the hardware against Team Zeke, 25-20. Behind Most Valuable Player and the first pick in the 2021 draft, the Detroit Pistons’ Cade Cunningham. Cleveland Cavalier Evan Mobley leading all players with 11 rebounds in both games, showed out again too. The young stars of tomorrow showing they’re ready to play today.

Over the weekend, The Land of Ohio provided not only two homecoming heroes a chance for one last dance in their old town, but also the future of the city to forge a new path in their own name.