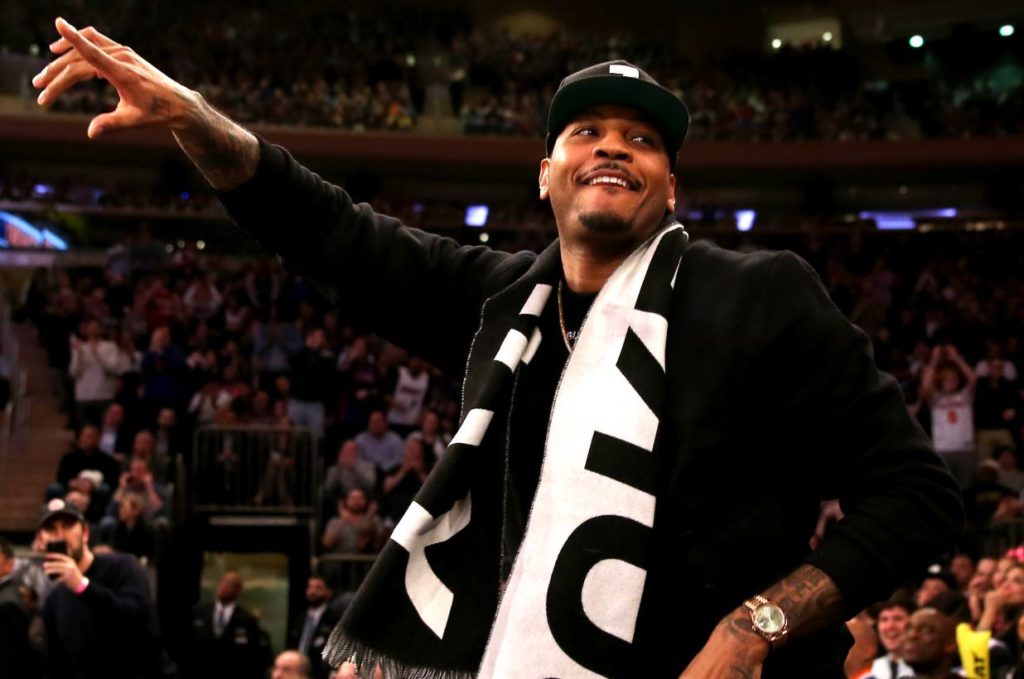 Nelly back in the day (2004) on the ‘Sweat’ part of his that and ‘Suit’ dual album release rapped, “I’m a Nugget type of fellow, I push the Carmelo” on the ‘Na-Nana-Na’ track that came after the ‘Heart Of Champion’ opening tip that sampled the Sportscenter iconic ESPN theme. Why are we mentioning this? Well, not only because it’s a hot line that made a hot song. But because it’s seemed this long ago since ‘Melo made waves in the L.

Even if his last stint last season with the Houston Rockets lasted so long it may as well have been a 10 day contract for the veterans minimum for the former Mile High City legend and New York Knick King.

But with all the talk on the problems in Houston between James Harden and Chris Paul, focussing on whether the Lakers will finally get their man in CP3. No nixing this time (too late) like they have Anthony Davis. Maybe it time the Lakers finally got an Anthony that they’ve been courting longer than this whole Davis debacle.

Conveniently just days after the Lakers landed Davis for seemingly half of Los Angeles (minus the Hollywood sign and cast of LeBron James’ ‘Space Jam 2’ (Klay Thompson people)) and all of their future (except the man, the myth, the Kyle Kuzma), the Overtime Twitter account added something extra with Anthony (not AD) hoisting up practice jumpers with the tag-line, “Carmelo just doesn’t miss” (word?!) in all caps. But in a timeline trend for tampering there’s no harm or foul here in a little seed planting in a subtweet of ‘Melo making some charity stripe shots peacocking.

It’s no charity attempt either if the Lake Show make an offer Carmelo can’t refuse either for the Godfather’s team this time unlike this trade deadline gone. The meme team of JaVale McGee, Michael Beasley, Lance Stephenson and Rajon Rondo has dealt with former All Stars as veteran contributers before for one year deals which we wouldn’t be mad at a re-up. So how about one for a certified legend that is one championship away from a Hall of Fame induction down the corridor of his career?

Then aside from the last dance of Dwyane Wade the banana boat will be complete.

Wine tasting with the King, ‘Melo is one of ‘Bron’s best friends forever. Hash-tag B.F.F’s. So it’s almost destined that the two rookie rivals that entered the league head-to-head will one day leave it as teammates. But it makes more sense that the Lakers finally make the move for Anthony after the other Anthony. The trade for Davis may have given the Lakers their best dynamic duo since Shaq and Kobe and the next big man great in the legendary Lakers lineage after Mikan, Wilt, O’Neal and Pau Gasol. But it also decimated their team. And we aren’t just talking about the star power potential of Lonzo Ball, Brandon Ingram and whom this weekends number four and future draft picks will concern. But the actual team over superteam aspect of glue guys they’ve lost like the defensive Josh Hart, who holds court as the best role player the Lakers have had and held since the Shaq and Kobe days of Robert Horry, Rick Fox and Sparks Head Coach, Derek Fisher.

So if the Lakers want to top the ‘Stranger Things’ team of vets this player power generation Independence Day next month, then they could produce on paper fireworks for the dry erase with big names like ‘Melo and CP3, for second unit scoring and point production off an even bigger bench. Sure the focus this free agency is on the K’s of Kawhi, Kevin and Kyrie…if they can even afford them with Anthony’s bonus. But they should also look to small ball build a team with the available assets of bigs like Al Horford and guys like former ‘Bron team buddy Kyle Korver from downtown if you want to talk about 2K’s.

Must Read:
As Golden State Warriors Parade NBA Championship Trophy Across Oakland Will They Cross The Bay Area Bridge Back To San Francisco?

Besides at this point apart from the new big-three of James, Davis and Kuzma and a couple of rookie contracts (Bonga and Wagner) the Lakers want to shop by the draft for mo, the Lakers barely have enough players under contract now to put out on the floor, let alone in reserve.

And with 40% of the association about to enter free agency and with previous young core Laker losses like Russell and Randle about to be unrestricted among them, it’s time for the Lakers to stop playing fantasy Basketball like LeBron hates and play smart Basketball like we all love like Kevin.

One Anthony deserves another. Time to make ‘Melo yellow.