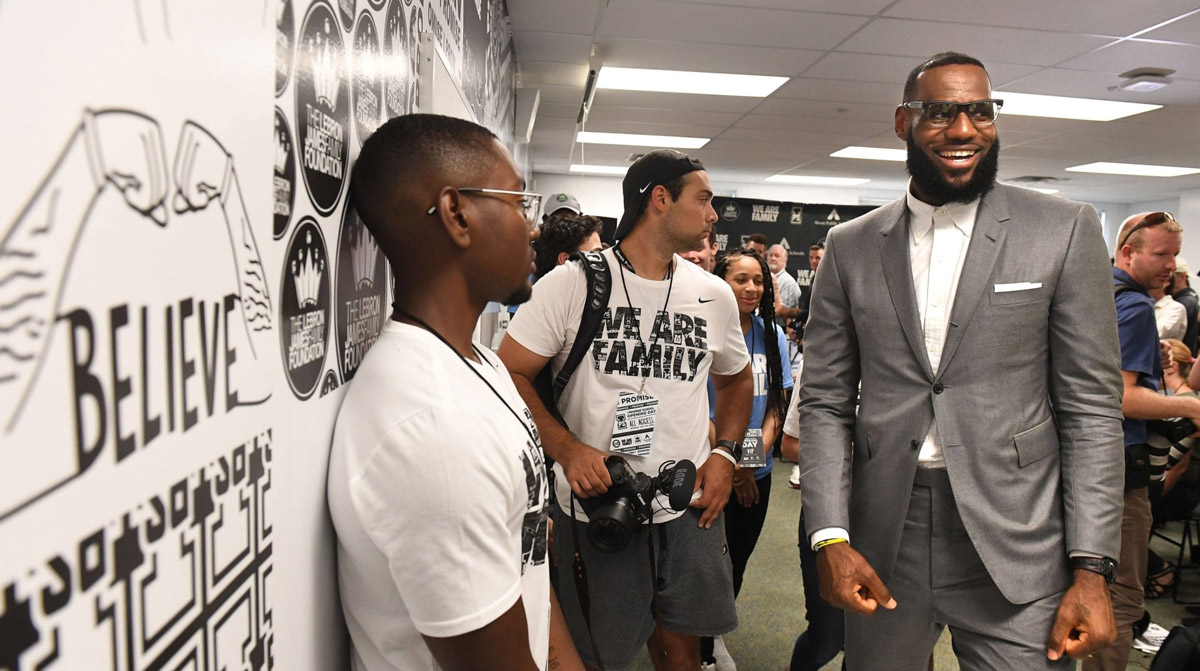 Lebron James Took Everyone To School This Year

The King’s greatest move this year wasn’t when he headed to Hollywood to become the latest in a line of legendary Los Angeles Lakers like Jerry West, Elgin Baylor, Wilt Chamberlain, Kareem Abdul-Jabbar, Shaquille O’Neal and Kobe Bryant to look to the rafters he one day hopes to put a banner. Up there with his jersey that belongs in NBA storied purple and gold lineage.

It wasn’t one of number 23’s countless signature moves. Were built like a linebacker he runs the entire hardwood like a classic quarterback, through the defence like butter left out the fridge overnight. Before Run DMC ‘You Be Illin’ touching down with a Statue Of Liberty, hammer of “BRING ME THANOS” dunk.

It’s not even when the league’s former villifed monarch turned hero for life changed the game again by the royal decree of the click of his fingers.

And no we aren’t talking about when the greatest player of all-time not named Mike signed on the Tinseltown dotted line for the ‘Space Jam’ sequel too.

No the monster move of LeBron James this year and because everything moves through him the best moment of hoops history this calendar didn’t even belong on court. Although you can bet this place has a fair few. The last time LeBron left his Cleveland, Ohio franchise with televised decisions for South Beach he really felt the heat and not even in Miami. He left in a fire and brimstone of scorched Cavalier jerseys and rocks being thrown at his billboard throne.

But not this time.

This time after making good on his promise to return home and win a ring for The Land, the lord of the Kings stood quiet as he left for the bright lights of a Hollywood Lakerland kingdom that had turned into a Lonzo Angeles Lakers, big balling reality show thanks to LaVar. Worse than when Lamar married a Kardashian (stay up legend.

No one did it like the magic of playing every spot before positionless basketball like Odom). LeBron was mum for a few days like visiting his folks for the holidays. This was because he was still in Ohio leaving his home with a parting gift much more touching then a full page spread in the Cleveland Plain Dealer which is still a big deal.

Truly pledging to the place he called his own and showing us that basketball is more than a game. James didn’t shut up and dribble. LeBron kept quiet and built a school. Flexing that mental muscle. When fellow Laker legends like Kobe were winning NBA first Oscars and starting production companies from the Granity up. Or adding to their storied history books, chapter and verse by writing Sherlock Holmes novels like Kareem. LeBron James was ensuring the future of underprivileged children from an elementary level.

A passion project not a “look at me” vanity one the King’s vision took a ‘Mamba Mentality’ to the classroom (we’re sure that essential text will rightfully end up part of the curriculum). Ensuring kids without that chance previously got one. Giving the school more activities, opportunities, ways to deal with stress and poverty, food banks and job placements for parents struggling.

What school does that?

Touch hardwood. I don’t want to tempt fate. But I can’t remember the last time LeBron James missed one game of the 82 season. But as a kid because his parents didn’t have a car, young LeBron missed a critical 83 days of school. It’s almost prophetic. But that all ended when the King loved his bicycle like Queen. And now number 23 is giving out two wheels like Oprah to every kid in attendance.

Must Read:
Patrick Beverley Doesn't Give A F...

And you though the viral video of him coaching his son on the sidelines positively after a losing game that’s been making the timeline rounds this week was heart warming.

And of course the only one that had something negative to say about this was (no not Chuck) Donald Trump. We won’t even give his twit tweets the light of day here like everyone else who should turn their back to this child demanding our attention. But we will say this how many schools has the Donald opened? Or if he wants to get petty how many young lives has LeBron James destroyed?

Even the First Lady Melania Trump backed up the King, saying she likes LeBron James and all he does (can you imagine the Trump family dinner that night?). Which really says it all.

So in the best Basketball moment of the year, Christmas came early this summer for the kids of Akron, Ohio.

And by the end of his term you know the King is just getting started.