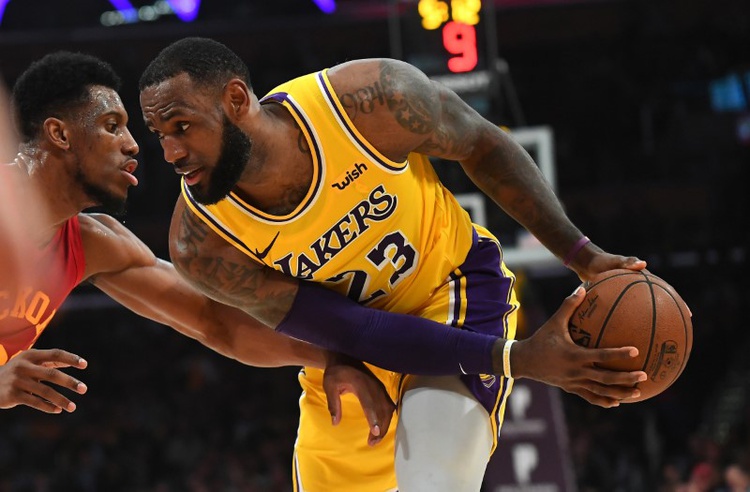 The Homestand King Knocks Down The Hickory Pacers’ Picket Fence

“But what could be greater than a King”, Jason Mamoa’s ‘Aquaman’ asks in the booming trailer for his new movie on the big screens of LA Live across from STAPLES.

Who says it doesn’t rain in Southern California?

After suffering altitude sickness in the Mile-High city of Denver for their worst loss of the season in Nevada this week. The King and all his Lakerland men met a homecoming in the City of Angels that was missing the Californication of the sun. There really was a storm coming in Los Angeles. But we’re talking about a different type of precipitation. As outside it may have rained all day in LA cats and dogs. But inside the STAPLES Center it was purple reign all night.

And it was the King who once dressed up as Prince who made sure the elevator didn’t bring us down, as he made the hoop heavens cry like doves with a game-high 38.

Basketball Buzz must have been California dreamin’ like your Mamas and Papas in La La Lakerland last night. With the best seats this writer has ever had in the King’s castle. On the last leg and final stop of our road trip of these United States before we take a United Airlines home, that began in the Mecca of New York’s Madison Square Garden. We were so (Glen) close in Hollywood we could see the sweat, King James joke with Goldstein courtside, or all the emotion. Live and for real in front of our faces. And this writer was even caught on the jumbotron camera last night…or at least part of his shoulder and face was. And they say dreams don’t come true.

In Tinseltown for the back-to-back (Magic voice: “yeah…YEAH”) doubleheader we were given the Dickens with great expectations. Especially staying across from STAPLES in the historic three pillars (no Lakers yet guys?!) of the Hotel Figueroa with a James jersey over my hotel room chair waiting for this banner moment. Overlooking the bright lights of this neon futuristic by night big city and a LeBron Nike billboard that witnessed the words, ‘Just A Small Town Kid, With Big City Dreams’. Don’t break into Journey’s, ‘Don’t Stop Believing’ people, but there’s faith here again in downtown LA. Literally a few blocks away from Hope Street.

We thought Lance Stephenson would go off against his former Indiana Pacers especially with their big star Victor Oladipo sidelined (he didn’t get chance unfortunately). We thought Lonzo Ball’s sprained ankle would mean he faced a DNP-CD as B.B. were in L.A. typically too (he didn’t let that happen fortunately). You have to give it up for this kids heart like that Twitter trending video of him defending every player on a possession against Orlando that was true Magic (word to Earv’). This year something has happened that even President Johnson couldn’t pardon. LaVar Ball has shut up. Maybe by royal decree. Or his own much more than given credited for common sense. But either way the smart entrepreneur with a Muhammed Ali mouth entertaining way of lip-service getting business done and dusted has kept it zipped. But did you notice through all this reality show, Hollywood hoops hoopla the kid Lonzo always kept quiet and let his game do the talking? And what a game! Ball balled out after refusing to let an ankle sprain sideline him after mining an injury against the Nuggets. When the Lakers said he was “questionable”. He refused that notion saying he was playing, no doubt.

Must Read:
Why The Phoenix Suns Could Be NBA Champions

And he joined the Lakers block party swatting off the glass in the same play that saw Ingram ingrain that defensive presence that D.P.O.Y. for sure right now JaVale McGee started, inspiring his back-up Tyson Chandler to knock out finish. When the game started the Pacers in their classic, vintage, best in the association, Hickory Hoosier honouring, red and gold uniforms couldn’t buy a basket until almost halfway through the first quarter with seven minutes to go and change. It was looking like a blowout with the game in the refrigerator, jiggling with the Jello on the week of Chickie’s bday. Let’s hear it for Hearn.

But then the Lakers let a Kobe jersey, 24 point lead slip through their fingers like water. Losing that Mamba Mentality as the (Hickory) Pacers ran the picket-fence that the Lakers had previously put up against them so strong in the ground, they were already applying a fresh coat of white paint. At least we got to see more of the King before it all dried. Because there would be no feet up in this one. At the half we had a ball game for the Lonzo show. And by the third it looked like this upstart without their go to, but still with plenty in reserve (Sabonis, Collision, Evans and Young) could give LA an L by the end of regulation.

But a W is a W like Vin Diesel “inch or mile” said to the late Paul Walker in the first ‘Fast and Furious’ checkered flag waver. And as McGee stopped a fast break that looked to turn the tide with one of his signature swats, the mood was changed for the team chasing a ring with the King. And let’s not Steven Glansberg forget a ‘Superbad’ 13 off the bench for captain and X-Factor Josh Hart. High-five! Or Beasley beastin’ on the Best Coast. But still L.A. couldn’t put them away from downtown Pico. Until K.C.P. had that chicken from three like KFC.

And after that it was all finger licking good for the purple and gold and their Colonel. As the King took off his robe, put on his crown and went into full clutch, royal gold mode. He may have shot from the line like Shaq still, but he faded all that away like Jordan or Kobe. If a guy built like a linebacker hit that sig Shooting Guard shot that is. This Basketball Godfather was untouchable in front of a sold-out Hollywood crowd that included the ‘Black Rain’ of Andy Garcia (this month last year this writer was in Osaka, Japan. This year a few rows away from the scene stealer of the Ridley Scott 80’s classic set there…crazy!) watching a purple one. Lighting up downtown Los Ageless (word to St. Vincent) like the pregame laser show inside STAPLES or that ‘Terminator’ apocalypse like ‘Blade Runner 2049′ skyline outside. The only thing brighter was Coach Walton’s Sager Strong suit in fitting tribute to a king of the sidelines.

But as LeBron either scored or assisted on the Lakers final 15, it all lead to a 104-96 win for the Kings young men that wasn’t exactly comfortable (this one was at times complacently gutted out like the Lakers/Pacers 2000 dynasty birthing finals that saw Kobe leap into Shaq’s arms for the first time. One of Budweiser beers’ golden moments of Laker history right now), but still fit like a new Sunday best, starched and pressed. As Sager himself who refused to give up or give in once said, “Everyone has to face obstacles. Everybody has to face hurdles. It’s what you do with those that determines how successful you’re going to be.” And boy did the King Bolt over those hurdles. Or more fittingly from the smart mind of Sager how about this to close it out…

“If we don’t have hope and faith, we have nothing.”

We do because of you. Respect sir. Rest Peacefully.