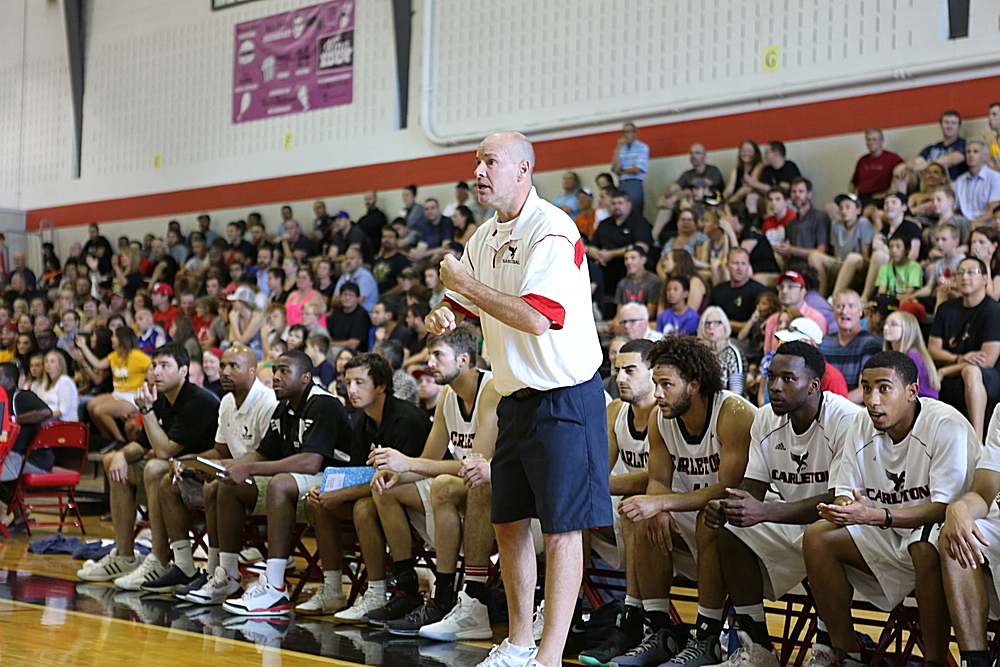 Ottawa, ON – Exhibiting a preview of what should translate into a CIS record seventh straight national championship, the twelve-time men’s basketball champions Carleton Ravens defeated the Wichita State Shockers 100-75 in front of loud and energetic home crowd at the Ravens Nest.

Four Ravens players reached double-figures, led by the early inside play of senior forward Ryan Ejim (Toronto, ON) 18 points, three rebounds. A much needed third-quarter, three-point shooting barrage from Connor Wood (17 points, 4-of-7 from three) and Joe Rocca (11 points, 3-of-4 from deep) helped Carleton turn an intense playoff-like 47-47 half-time tie into their fourth-largest margin of victory over NCAA Division I basketball opponent with their 25-point victory.

In only his second home game, newly transferred point guard Emmanuel Owootoah (Toronto, ON) who spent his first two collegiate basketball years at Division I Fresno State in California and most recently at Division II Lynn University (Boca Raton, Florida) was instrumental in the win over the Shockers who were a 2014 NCAA Final Four team.

“I didn’t expect to be this loud, it was a good game, they punched us and we punched back.

Owootoah created havoc for the visiting Shockers by dazzling and “wooing” the fans with his quickness and dribbling ability, finishing with 8 points, a game-high seven assists and team-high 29 minutes.

Carleton trailed 3-0 and immediately responded with six straight points by Ejim to ignite a 20-6 run and a 26-20 first-quarter lead. Wichita State, the current two-time Missouri Valley Conference (MVC) champions, turned to their full-court pressure and a late four-point play and buzzer-beating tip in evened the game at half-time.

Behind a stellar defensive second-half and improved shooting Carleton limited WSU to just 28 second-half points, buried 8-of-16 triples in the second-half after shooting just 2-for-12 in the first. Despite Carleton’s shooting struggles Head Coach Dave Smart who is back at the helm after a sabbatical year thought his team was already a better three-point shooting team than last year.

“It’s tougher for some of our guys to get clean looks against a quality opponent like Wichita State, but I believe our team is a better shooting team than last year.” Asked to describe what the addition of Owootoah means to the program, Smart pointed out to sheer speed and quickness and overall personality as a perfect fit for his Ravens.

“He just so fast, having him out there is a big plus for us, his experience showed in a game like this and allowed to break down their pressure and get in the lane for open looks — his personality is great, I’ve always had a great relationship with him, and it’s hard for me to get upset at him.

Shockers head coach Greg Marshall, the 2014 NCAA Division I National Coach of the Year, wasn’t particular thrilled by how is team played and was visibly upset after the game, but also took credit for his inability to prepare his squad for the 25-point onslaught.

“They were a lot better than what I thought, Dave Smart is such a good coach and their guys played with a tremendous amount of energy, intensity and desire to win, our guys did not, we need to improve on that. We are ten practices in with this group and I need about thirty”

“We did zero scouting, and they carved us up with their sets,” Marshall said. “Put some of this on me. I didn’t scout the team and I didn’t do anything with the 24-second clock.”

Much like Carleton’s 32-point dismantling of the Memphis Tigers back on August 19, 2014, the 25-point win over the Shockers got the attention of the media state side.

The Ravens improve to 2-0 in NCAA preseason action after taking down the Stetson Hatters in their preseason opener. Carleton will get a few days off before returning to action against Arkansas Pine Bluff @ 7:00 PM.