The Windsor Lancers came-up short 104-99 against the visiting NCAA D1 Oakland Golden Grizzlies in double-overtime at the St. Denis Centre in Windsor Ontario.

The Lancers stormed back behind Josh Collins 26 point second-half performance. Enrico DiLoreto buried a jumper at the buzzer to force overtime.

The Golden Grizzlies led 88-85 with under a minute to play when Josh Collins nailed another three-pointer to force a second overtime.

With the game tied at 95, the Grizzlies’ Lucas-Perry connected on his third 3-pointer of the game, this time giving OU a three-point lead, 98-95. Lucas-Perry then made six consecutive free throws to end the game and give the Grizzlies a five-point exhibition win.

OU shot 41 percent (34-84) for the game and out-rebounded the Lancers 52-44. The Grizzlies turned the Lancers over 23 times and had 13 steals. The Black and Gold outscored Windsor 24-12 from the charity stripe.

The Lancers record drops to 0-3 in their current NCAA exhibition series after losing two tight contests to the North Florida Ospreys.

Oakland lost to the Texas Longhorns 85-81 in the second-round of last years NCAA Championships.

Windsor was upset 85-82 by the Laurier Golden Hawks in the OUA West Semi-Finals.

Both teams go at it again tomorrow. 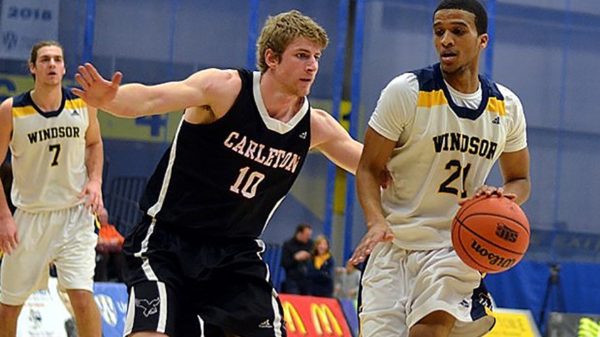