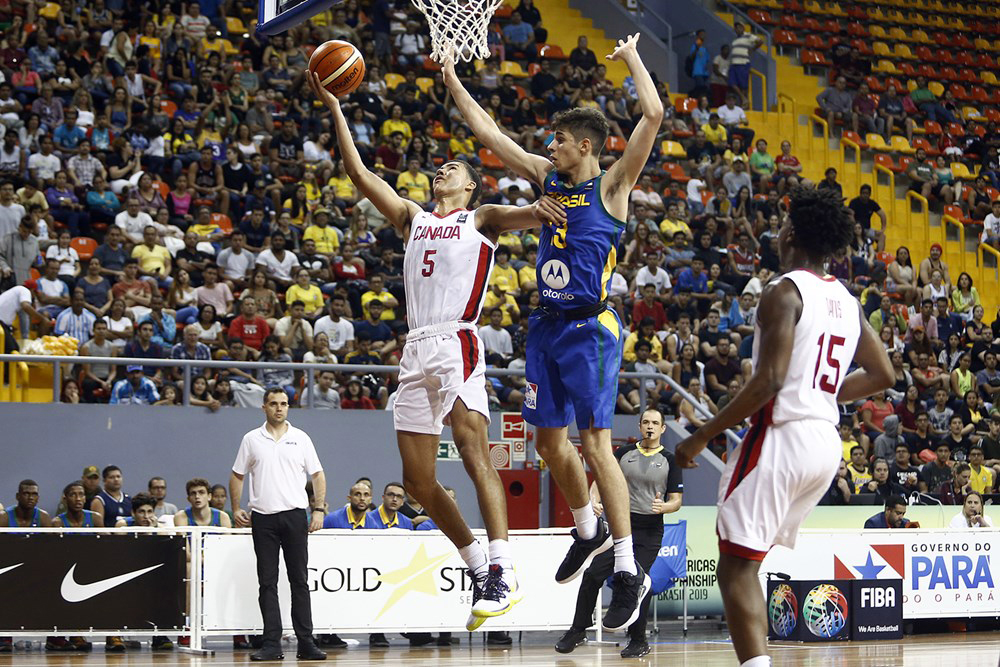 Caleb Houstan (Mississauga, Ont.) opened the scoring for Canada with back-to-back triples to give Canada the early 6-2 advantage and finished with 16 points, 6 rebounds in the first-half as Canada held a 44-34 half-time advantage.

Houstan, a 6’9, 185-pound, class of 2022 forward who completed his first high school season stateside at Montverde Academy, continued to dominated the game on both ends — finishing 10-of-21 from the floor, including knocking down 4-of-10 smooth looking three-pointers in 31 minutes.

The five-star guard performance ties Kevin Pangos’ 2009 record for the most points scored by a Canadian in a FIBA Americas U16 championship event. Pangos scored 28 points, added 7 steals and five assists in 106-81 June 21st win over Venezuela in Mendoza, Argentina.

Brampton’s Dylan Kalambay (8 points, 9 rebounds) was a force to be reckoned with on offensive glass pulling down 8 of Canada’s 26 offensive rebounds.

Brazil kept it close behind a cheerful and supportive home-crowd — taking their only lead of the game 12-11 mid-way through the first-quarter.

The hosts limited Canada’s transition game in the second-quarter, outscoring the Canadians 19-17, but trailed 69-55 at end of the third-quarter

Canada opened the fourth-quarter with two-hand slam by 6’9″ big man Enoch Boakye who struggled with foul-trouble to finish with 3 points and 7 rebounds.

Must Read:
Canadian basketball in the 1930s'

Team Canada (2-0) will look to stay perfect as they concluded group B action with a game against face Puerto Rico (1-1) tomorrow.