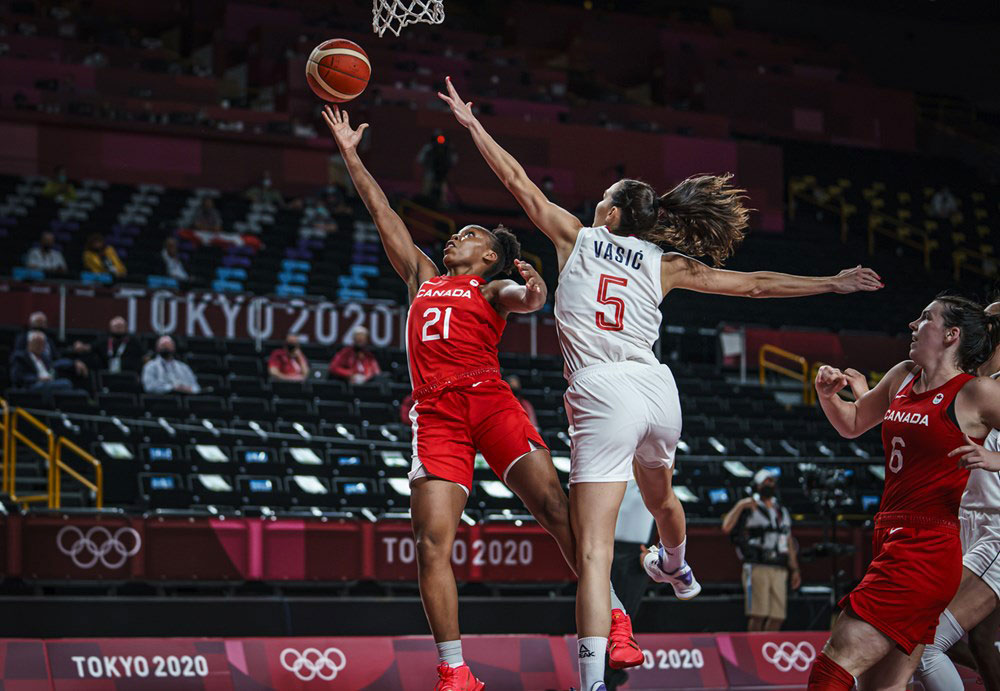 It was a tough opening game for the Canadian senior women’s national team as No. 4 FIBA-ranked Canada fought hard, but dropped a close 72-68 opening game to No. 8 Serbia to start the 2020 Tokyo Olympics at Saitama Super Arena in Japan.

Trailing 38-26 at half-time, following an abysmal first-half shooting performance, sparked by back-to-back three-pointers by Shay Colley and Kia Nurse,.Team Canada turned-up the defensive pressure outscoring Serbia 17-9 in the third-quarter to tie the game at 45-45.

Serbia scored the first five points of the fourth-quarter, but Canada quickly rallied to take a brief 56-55 lead, before Serbia knocked down five straight three-pointers in the last five minutes of the game.

Nirra Fields scored a game-high 19 points to lead three Canadians in double-figures. Kia Nurse finished with 16 points, 6 rebounds, 4 assists and 3 steals. Shay Colley contributed with 12 points before being forced to leave the game with right shoulder injury she picked-up from diving for a loose ball.

The entertaining game featured 14 lead changes and seven ties, Canada trailed for the majority of the game, leading only for 5 minutes and 33 seconds. Canada forced 28 Serbia turnovers leading to 23 fast break points.

Serbia’s excellent ball movement consistently found open shooters on their way to an efficient 26-of-52 (50%) shooting night and 8-of-17 from threes and 12-of-15 from the charity stripe.

Team Canada (0-1) will play Korea (0-1) on Wednesday, July 28, in their second-game of the Olympics tournament.