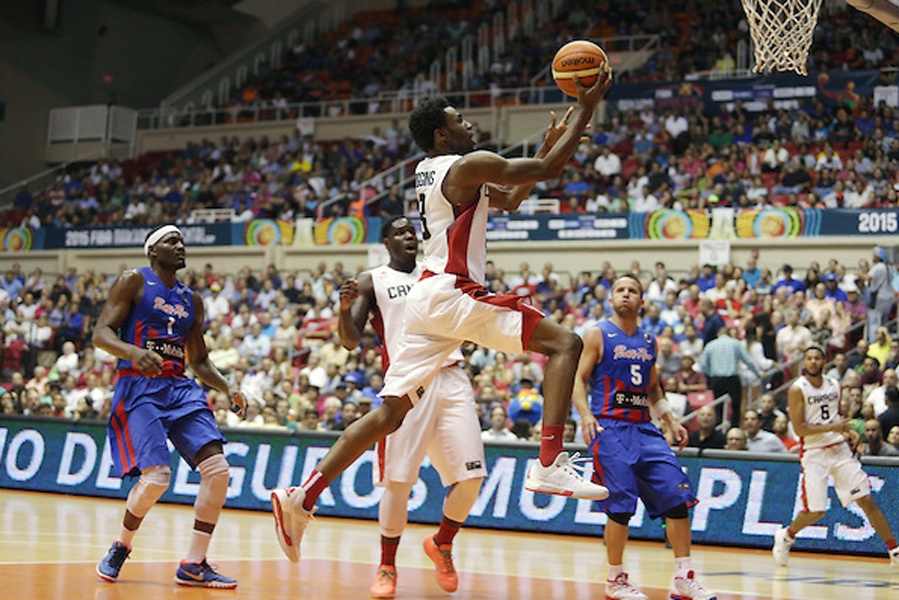 What a difference two years makes!

After failing to win a game at the 2013 Tuto Marchand Cup, Canada’s Senior Men’s National Team (SMNT) completed a clean sweep at the bi-annual FIBA Americas tune-up tournament. Canada finished a perfect 4-0 thanks to a hard-fought 78-72 win over hosts Puerto Rico to claim their first-ever Marchand Cup title since the event began back in 2007.

Behind a game-high 20 point, 5 rebound performance from Andrew Wiggins, capped by a late-four quarter dunk that set social media on fire, Canada was able to fight-off a Puerto Rico opponent which came into the game on a nine-game winning streak versus the Canadians. Andrew Nicholson found his shooting touch, knocking down 4-out-5 three-pointers on his way to a 16 point, four rebound outing.

Unlike the three previous contests where Canada was able to pull away from their South American opponents early on, Puerto Rico played with Canada from start to finish, forcing Jay Triano and his staff to shorten the bench rotations to 8-9 players to pull out the win.

Melvin Ejim (Orlando Magic) continued to show his improved shooting stroke and the ability to defend multiple positions, the former NCAA BIG 12 player of the year (Iowa St./2013) racked-up a double-double with 11 points and 11 rebounds (6 offensive) on 4-of-5 shooting.

Canada’s starting point guard Cory Joseph, also played well and finished with 9 points, 7 rebounds, 4 assists and 3 steals in the win. Philip Scrubb outstanding playing continued as the former 3-time CIS Most Valuable player chipped in with 7 points and 2 rebounds including a huge three-pointer late in the fourth quarter as Puerto Rico threatened to take lead.

For the four straight contest Canada out-muscled and out-scrapped their opponents on the boards with 45-36 advantage over Puerto Rico.

Despite Canada’s success at the Marchand Cup Jay Triano and his troops must address the foul-shooting woes, Canada once again left plenty of points off the board by going 10/18 (56%) from the charity stripe. Canada shot a low 63/95 (66%) in all four games. Turnovers will be an area of concern as Canada averaged over 16 giveaways per game versus 13 assists

The last time Canada beat Puerto Rico was in 2007 at the opening game of the Marchand Cup, a 65-63 win. Canada, Argentina, Cuba, Venezuela along with Puerto Rico round-out Group B at the 2015 FIBA Americas Championships. Both teams will meet at least once again, in less than a week, for their last group B game, a match-up which could, very well determine who advances out of the group stage as the SMNT continues their road to Rio De Janeiro.

Canada kicks off the group stage of the Olympic Qualifier against Argentina on Sept. 1.