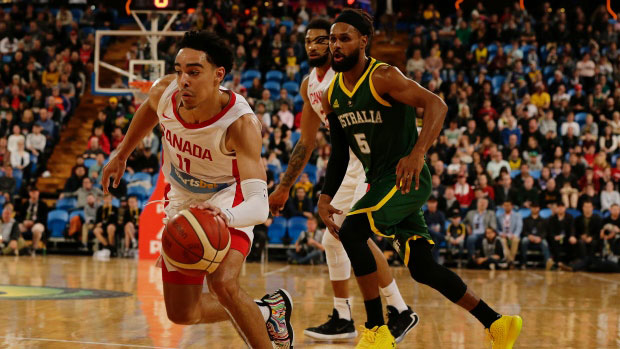 “He just wants us to play aggressive and play with confidence and keep getting better, it’s a process, we don’t want to peak right now, we want to peak at the Worlds.” discussed Pangos post-game about head Coach Nick Nurse’s mentality coming into the physical affair against a team that is part of Canada’s group H at the World Cup.

“I’m just excited to be here, I feel like I’m supposed to be here and feel really comfortable on the court.” – opened-up Nembhard after the game.

Kaza Kajami-Keane came off the bench and hit a crucial three-pointer to end the third-quarter to restore orders for Canada and finished with 12 points. on 2-of-3 three-pointers. Kyle Wiltjer was crucial with 11 points and 6 rebounds including 3-of-6 from downtown.

Owen Klassen filling in for injured Olynyk was solid with 10 points and 4 rebounds. Philip Scrubb also chipped in with 10 points, 3 rebounds and 2 assists.

Mills finished with a game-high 20 points knocking down 4 of Australia’s 6 three-pointers on just 4-of-13 outside the arc.

Nick Nurse opted for a starting line-up that featured Philip Scrubb, Kevin Pangos, Oshae Brissett (3 points, 6 rebounds, 3 assists), Kyle Wiltjer and Khem Birch (6 points, 5 rebounds, 3 assists). Both Brady Heslip and Melvin Ejim sat out this one out and will likely suit-up for the next game.

Canada improves to 2-1 in their 7-game pre-Fiba schedule and will take on the Aussies once again tomorrow as both teams get ready for the 2019 FIBA World Cup in China.