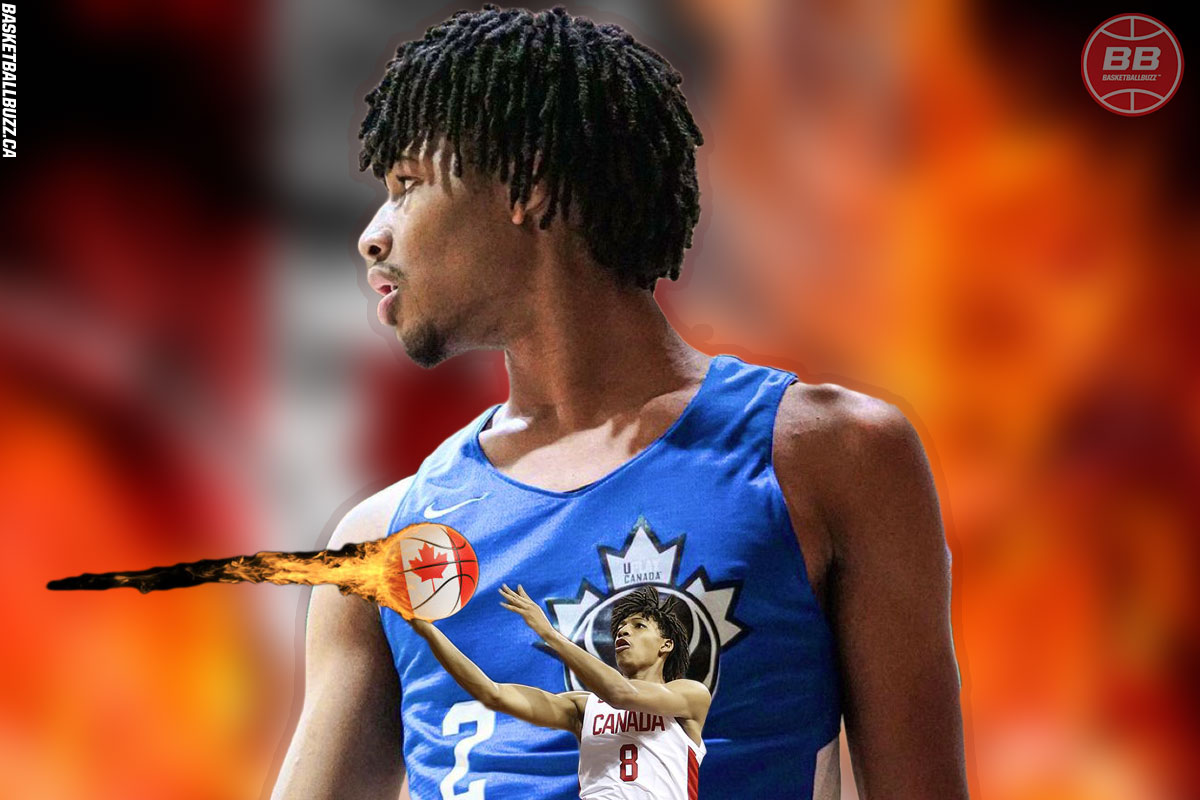 In the long list of rising Canadian high school basketball prospects there is nobody hotter on the scene than recently turned 18-year-old Shaedon Sharpe.

Over the course of the last decade Canada has produced top basketball names like Andrew Wiggins, Jamal Murray, Shai Gilgeous-Alexander and RJ Barrett. But truth be told, Sharpe may arguably be, slightly ahead of all of those great names at this stage of his early development.

Making a splash at the 2019 U16 FIBA Americas tournament in Belem, Brazil, Sharpe has seen his game steadily rise like his unbelievable 49-inch approach vertical leap.

Sharpe, the top Canadian basketball prospect in the class of 2022, currently sits in the top 10 across all major ranking sites and is expected to continue to challenge for the number one spot in a strong recruiting class loaded with star talent.

Presently running game with United Public Leadership Academy for Youth, also known as UPLAY Canada, the six-foot-five, 195-pound guard, has become the hottest commodity on the recruiting trail, re-opening up the debate for the top spot in the class between Jalen Duren, Emoni Bates and Sharpe.

Through seven group games at the 2021 Nike Elite Youth Basketball League (EYBL) finals in North Augusta, South Carolina — the Canadian stud is putting up eye-opening numbers in-front of all the top NCAA teams, including favorite suitors John Calipari and the Kentucky Wildcats.

An elite athlete since his younger days, he declined an invitation to play for Canada’s bronze-medal winning U19 team, instead Sharpe spent the last eighteen months developing his shooting touch and dribbling skills to become a complete and dynamic three level scorer.

“The end goal was to develop as a lead guard the way Jamal Murray did. Capable of playing both guard positions.” said Washington in a recent interview about his rising star player.Dwayne Washington – Founder/Head Coach – UPLAY Canada

Sharpe, the main attraction at London’s H.B. Beal Secondary School, he led the Raiders to the 2019 Ontario Federation of School Athletic Associations (OFSAA) AAA championship, earning the Raiders a 9th-seed in the 18-team provincial tournament in Hamilton, Ontario.

Looking to sharpen his game, he took his talent stateside for a stint at Sunrise Christian Prep in Bel Aire, Kansas for the 2019-20 year before transferring and finding success with Dream City Christian Prep in Glendale, Arizona during the 2020-21 season.

Andrew Wiggins, Tyler Ennis, Rathan Xavier-Mayes and CIA Bounce are the first and only Canadian team to make it to the EYBL Finals in 2012, losing out in controversial fashion to Aaron Gordon, Stanley Johnson and the Oakland Soldiers.

UPLAY Canada (4-3) has a tough road to go to match the benchmark set by head coach Tony McIntyre and nearly undefeated CIA Bounce, but similar to how the EBYL circuit served as the platform for Wiggins, Murray and Barrett to hone their skills — Sharpe is also leaving very little doubt about his future intentions to join the conversation as one of Canada’s very best basketball players.