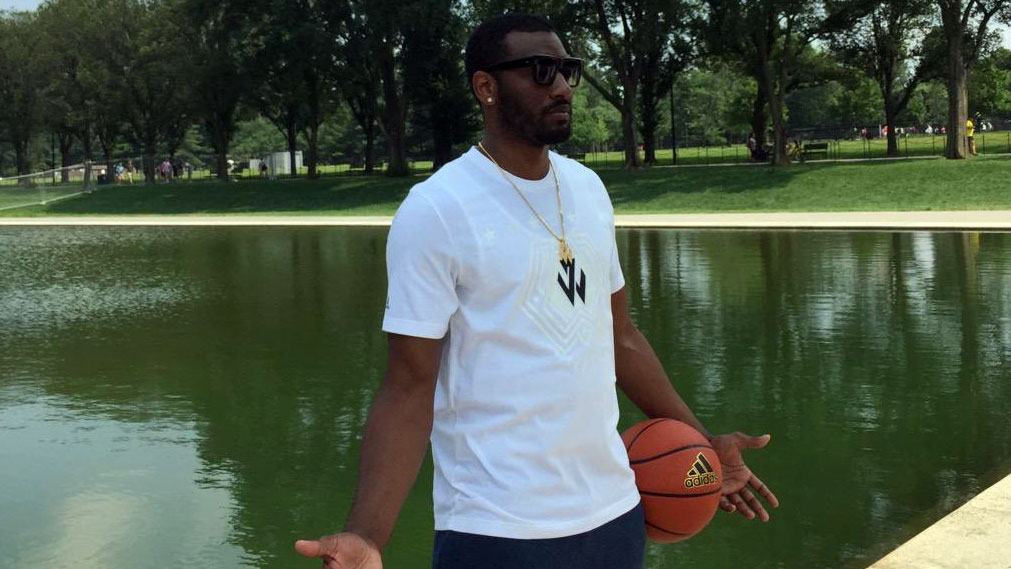 Spellbinding Wizards All-Star guard John Wall is so fast he could even overtake Marvel’s Avenger Captain America, lapping The Falcon over and over again across Washington’s Mall in that opening scene of last years ‘Winter Soldier’ movie.

Still reaching the end of it in D.C. the Wall to wall, court running star took a break on those iconic steps that lead to the magnificent memorial of the greatest U.S. President in history Abraham Lincoln.

Still heeding honest Abe’s words of wisdom, stating; “Whatever You Are, Be A Good One”, this dear John was still working even whilst sitting. Revealing to Lincoln and the rest of the world via the Periscope app the new line of sneakers he’ll lace up. The JohnWall2 which is set to hit courts and lockers this fall.

Wall gave his fans in the metropolitan D.C. area one more treat and tweet, going all Where’s Waldo as the red and white, candy-striped jersey star hid an autographed pair of his kicks in the city for a fan to find. This treasure hunt makes for one of the biggest attractions in a city of MLK monuments and ‘Civil War’ superhero movies filming. You may want to cop these more than a glimpse of the new Black Panther and Spider-Man.

Now that’s a steal. You better be faster than the Wall because we’re sure these shoes will be scooped up quicker than an errant pass across the guards wingspan reach.