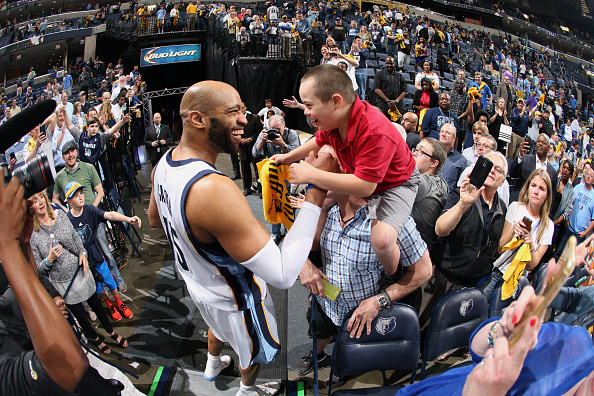 Carter Has Still Got It

Sorry Toronto fans, even if you don’t get Carter you have to admit it…

…Vinsanity is still in the NBA’s membrane…

…Vince Carter is still in the game.

Like EA Sports the former video game like slam dunker and All-Star may not have been back in the contest in his former T-Dot home this February the 14th, Valentines weekend gone in the 6, but that doesn’t mean he can’t still ball.

He may now reside on the pine like Chris, out in the woods of a former, fellow Canuck club franchise Vancouver, now relocated by the grace of Elvis-land to Memphis. With a greying beard that truly makes him a member of the Grizzlies through and through, but he still looks as young as he does capable of felling a tree if there are any out there in Tennessee.

In this young mans league the man pushing 40 and a retirement cheque, but acting on court like his number, possesses a game still Air Canada fresh. Even though its been more than a decade since he departed Pearson for a New Jersey.

V.C. is still bringing down the nets as a Memphis Grizzlies super-sub, former superstar with more in reserve thrice removed from Brooklyn’s former Meadowland home after stints out in Orlando, Phoenix and Dallas as a Magic, Maverick who still rises and has yet to see the setting sun.

Think fellow former All-Star Paul Pierce doubling up over the years for the Washington Wizards and the Los Angeles Clippers. Or a little closer to the STAPLES, retiring and touring Los Angeles Laker legend Kobe Bryant, who Vince met this week for the last time and a farewell to the rocking city of Memphis for this games rolling stone.

Must Read:
Ingram Is Back For The Lakers. No Not That One. THIS One...

No longer cleared for above the rim takeoff, save the occassional coast-to-coast trip, like his court contemporaries Carter is bringing the greatness of his game down to an exact science and the earth below the hardwood.

Just like his own stop in Lakerland last night, where he showed Hollywood the gold standard of beautiful basketball beyond the arches like Bean has been popping this season. His pure play was nothing but net like his cookie jar classic dunk. Now Carter is reaching further and clutching 19 off the bench he led his Grizzlies team to a 112-95 win against the Lakers last night.

A much needed moral boost out the microwave door for a franchise that needs a little up after putting down former Lakers pick Marc Gasol for the season with campaign ending procedure under the knife. The team led by the nice post and point, inside and out duo of Zach Randolph and Mike Conley is still grinding but is also gritting its gums, teething for a new identity. Perhaps newly acquired star power, the wonderful but wayward Lance Stephenson (for the reliable scorer Jeff Green at the trade deadline) will fit the bill and finally find a home here like he will going up against defensive dogs Tony Allen and Matt Barnes in a practice we’d pay to see play.

We can think of the perfect mentor.

One that’s been through it all. All the ups and downs. One that can still get up and even still get it going. You keep seeing the throwback dunks, but how about that halfcourt heave as classic as that red shirt?

Even in the fleeting final seconds Tha Carter is not giving up.

Unlike Kobe we dont know when Vince will call it. Over the next 24, 48 or 82 his time will soon come. The buzzer will finally beat him…