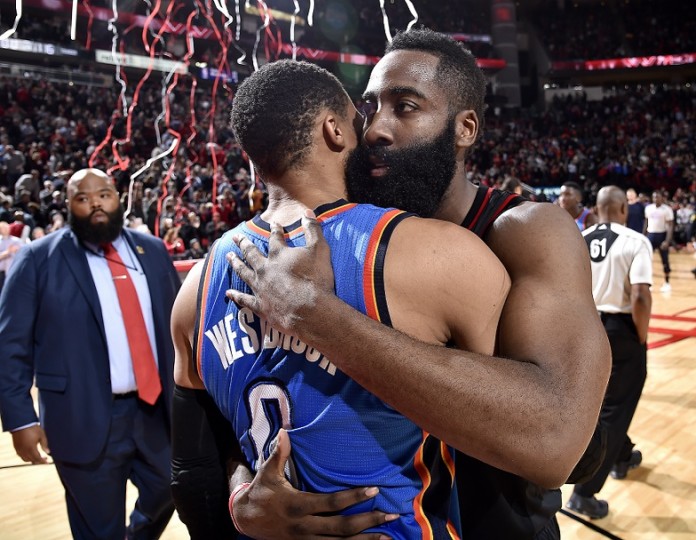 Harden & Westbrook Put The “Most Valuable” In ‘MVP’

Why are the Chicago Bulls currently shopping someone as good as Jimmy Butler? Why has Kobe Bryant not acknowledged the Mamba mentality of former teammate Luke Walton and his young, new Lakers in public yet? Which college on earth gave the graphic design degree to whoever designed the Los Angeles Clippers logo and jersey rebrand?

Why the hell did the Oklahoma City Thunder let James Harden walk and their big-three of Russell Westbrook and Kevin Durant go?

Sure right now even in the LeBron Land face of King James’ Cavalier throne out in Cleveland no team is walled with talent quite like the avenging Golden State Warriors. More star studded than those bedazzled jeans that should have remained in the 80’s with Blondie and Bon Jovi. This basketball team is tougher than the rest and Springsteen leather. Suited and booted they’re even bringing Run-TMC back. Word to the rock, Mitch Richmond.

Now sure the Oklahoma City Thunder may not have the likes of Steph Curry, Klay Thompson and Draymond Green, but Kevin Durant doesn’t have James Harden and Russell Westbrook.

The two strikes of lightning are the worst losses to this franchise since they used to be called the Seattle Supersonics. Do you call that karma? Or just bad management? If the Thunder made it through the downpour and their big-three still reigned it would be the greatest holy trinity of all-time in this game. Yeah we said it LeBron, Wade (or Kyrie) and Bosh (or Kevin). Even if James Harden’s epic eurostep is met by two left feet on the other end as he is Barb from ‘Stranger Things’ on defence. Or even if we have no idea when the dynamite dynamo Westbrook’s ‘Mission Impossible’ fuse will run out before he self destructs (we say never).

With this trifecta you could have forgot about the former foregone conclusion to the Cavs/Warriors trilogy…and maybe even now you still can in the wake of this death of a destined to be dynasty.

Because the Warriors may be war ready, coming out to play and going back to battle bruised and battered with a new band of brothers, but the Cavs (unless the other C’s, the Celtics and Chicago have something to say about it) may face off with two other big names that can really make a splash. Because aside from LeBron and all the Kings men, Russell Westbrook and James Harden aren’t just MVP front runners. These Most Valuable Players are also chasing down that elusive ring.

They met to end last week in one of this seasons most sought after fixtures and highlights. And it was all big numbers across the board and shared social media posts of repect with their Instagram pics flashing as much as their iconic, individual off court fashion. Lucky number 13 and far from zero really are the Kendrick Lamar and Childish Gambino generation of hip hoop heroes. Both carrying their teams with assists from dynamic All-Star worthy backcourt mates (Victor Oladipo for OKC’s new three (what’s up Steven Adams?!) and Eric Gordon as the Rockets booster pack), no matter Houston’s problems or the weather the Thunder are under.

Out in this wild westworld Westbrook (31.4 ppg, 10.6 rpg and 10.3 apg) is on statistical pace to average a triple-double as staggering as the ‘Big O’, Oscar Robertson himself. That’s record numbers, half centuries in the history books making. And no stranger to things like trip dubs himself, Harden (27.9 points, 8.2 rebounds and 11.9 assists per) looking as good as those H-town new alternate jerseys as black as his beard is setting new standards in the assist column. When it comes to this cook stirring the pot you can pass up on Chef Curry’s dish of threes for a buzzer beating second. Here’s to two next gen Point Guards defying all conventions.

When it comes to these two bball quarterbacks and former teammates reunited just days ago, just like these friends could never be foe only one of these men this year will get the chance to meet Maurice.

But when it’s all rung up come Hall call, both famers will share the name ‘champion’. No matter what team they’re on.