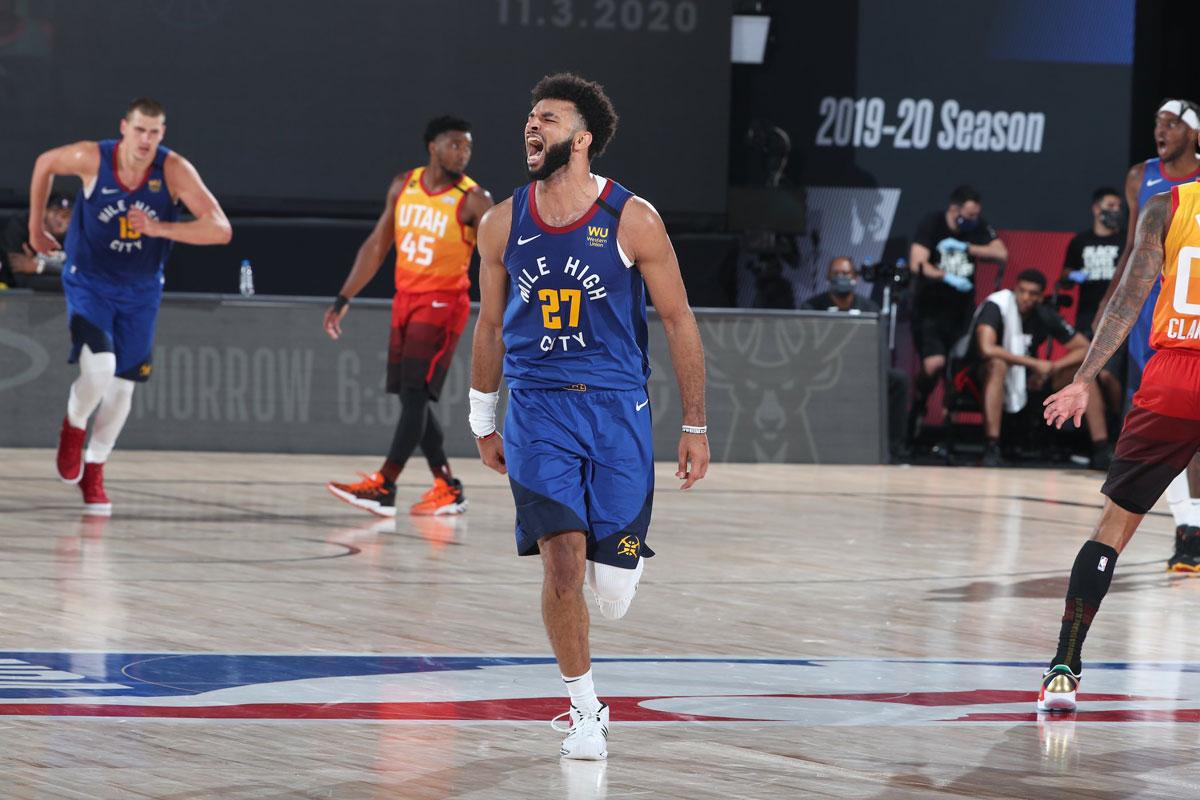 Jamal Murray. We would say, “that’s it…that’s the article” like a tweet, but what he did and said today means so much more in a trending world that needs to know this is more than a hashtag.

Just look at what the name above his number says from this aerial view from the Bubble that may as well be a Mile High for how far this young superstar has taken his Denver Nuggets team.

All on the same back.

The first player since the stepping over Allen Iverson in 2001 to have a big three straight 40 plus point NBA playoff games.

The first player since Michael Jordan, back in the 1993 NBA Finals with 40 points or more in three straight games…in the same playoff series too.

Right there with the Utah Jazz 50 point player Donovan Mitchell singing from the plays they run from the dry erase whiteboards.

This line is no pick up one or mere pick up Basketball.

This was a do or die game in today’s matter of life and death.

Still this wasn’t what was the most important thing about Jamal’s night as he stood at a social distance for his postgame interview.

Not by a long shot.

Murray held court with George Floyd on one sneaker and Breonna Taylor on the other foot. Black power fists surrounding them like a podium with one drenched in red. Just like Jamal’s eyes as he broke down and couldn’t quite find the words. His emotions like his box score saying it all as he tried to raise his head above the weight his shoulders have been carrying.

“These shoes mean a lot,” Murray said between trying to say it right as he also kept repeating, “I just want to win”.

We don’t win until we all do.

“I just want to win… in life you find things that hold value to you, find things to fight for, and we found things worth fighting for in the NBA as a collective unit.”

“I use these shoes as a symbol to keep fighting,” Jamal said about the sneakers that “give him life” even though George and Breonna are gone.

“They give me a lot of power”.

“All around the world” he adds. Remember our Jamal is Canadian. He’s caring about his neighbors and where he now lives in Colorado even more than some Americans on the wrong side of a nation divided, and searching to be united again.

“It’s not just America, it happens everywhere”, Kitchener, Ontario’s very own reminded and warned us.

“It’s not going to take one night. We’ve been fighting for 40 years” a man speaking so much more than his 23 years added. With young men like Murray, this generation is going to be alright.

Just what a world we’re leaving them.

It’s been a long end to the week that has made this year where we lost both the Black Mamba and Black Panther even harder. Just like LeBron said doing the ‘Wakanda Forever’ symbol in anthem kneeling solitude in the Lakers close out game against the Blazers.

Still the NBA rises and comes back together. From taking a knee and boycotting to suiting up like T’Challa and playing for all we have lost and still hope to find like peace one day.

Now this young superstar is going to help us find strength.

The postgame interviewer said it all, Jamal Murray is a “special person”.