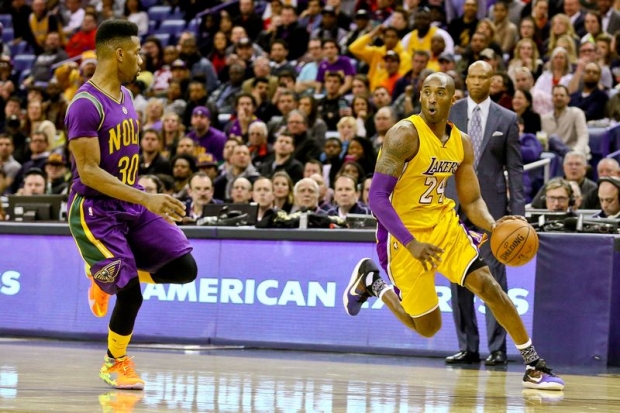 Vino like a fine wine has been taking it back to a good year this week.

How do you spoil a Mardi Gras party in New Orleans? You throw a snake into the middle of it!

Kobe Bryant showed you could still draw venom from the Black Mamba last night. And it was a sweet Vino off Bourbon Street as Bean stopped the parade in Louisiana last night with his own retirement tour stop.

His decadent double, double of 27 points and 12 rebounds turned back the clock all the way to the end of regulation where the Lakers left the French Quarter and the fourth with a 99-96 win over the New Orleans Pelicans.

Kobe Bryant “exorcised those demons” last night like someone drinking their break up pain away at a local bar downtown. Those demons being a separated shoulder injury here that lost him another of his closing chapter years almost a full calendar ago.

The Smoothie King Arena was made Irish last night by an aged Celtic rival that seems to be getting better with time during this seasoned 82 he’s fathering. The Mamba had the throne dressed in gold on the road as the home Bayou team where wearing their purple Mardi Gras sleeved specials, meaning there would be no Killgrave alternatives for the Lakers Show. But Kobe had a purple heart, saying N.O. to any on court celebration in Crescent City.

He didn’t take it easy on the Big one, on a tear a year after the torn shoulder. Averaging 29.3 points, 8.3 rebounds and 3.3 assists over the last three per on a 50% rate from downtown with the Steph Curry.

This was all highlighted by his Youtube worthy shot selection rotation from the Lakers previous win against Minnesota where back in L.A., he and his Lakers showed the Timberwolves that Minneapolis was their original home too. His 38 special made him the oldest player in L history with at least 35 points, 5 rebounds and 5 assists since Utah Jazz legend Karl Malone played with him as a late career Laker. His high ending a lowly, terrible ten game losing streak and starting their own two plus winning one that is even a puzzling mystery to the not confidence shy number 24 himself.

Must Read:
Tracy McGrady: The wake up show

“I don’t know what to tell you”, the leading Toronto All-Star game vote-getter told press post-game. Complete with an M.J. shrug.

Nawlins didn’t stand a chance in Gumbo. Even with new superstar Anthony Davis’ MVP caliber 39 points. The Lakers just had so much more in the chamber, especially the retiring legend. Even rebounding from being dunked and funked on by Ryan Anderson. His minute to go dagger three cut all that away.

The new Lakers Show added more grapes to Vino’s wine as Jordan Clarkson’s 18 led the future of D’Angelo Russell’s 13 and Julius Randle’s 11. But the main thing was Kobe wasn’t shooting any air-balls in the town that once hosted the Jazz. The only air he took was out of that Smooth Arena. And that was music to the ears of any one wearing purple and gold without the ‘N.O.’ in front of L.A.

Across the coast in California the City of Lost Angels had a little parade party of their own. Can you guess what they toasted with?