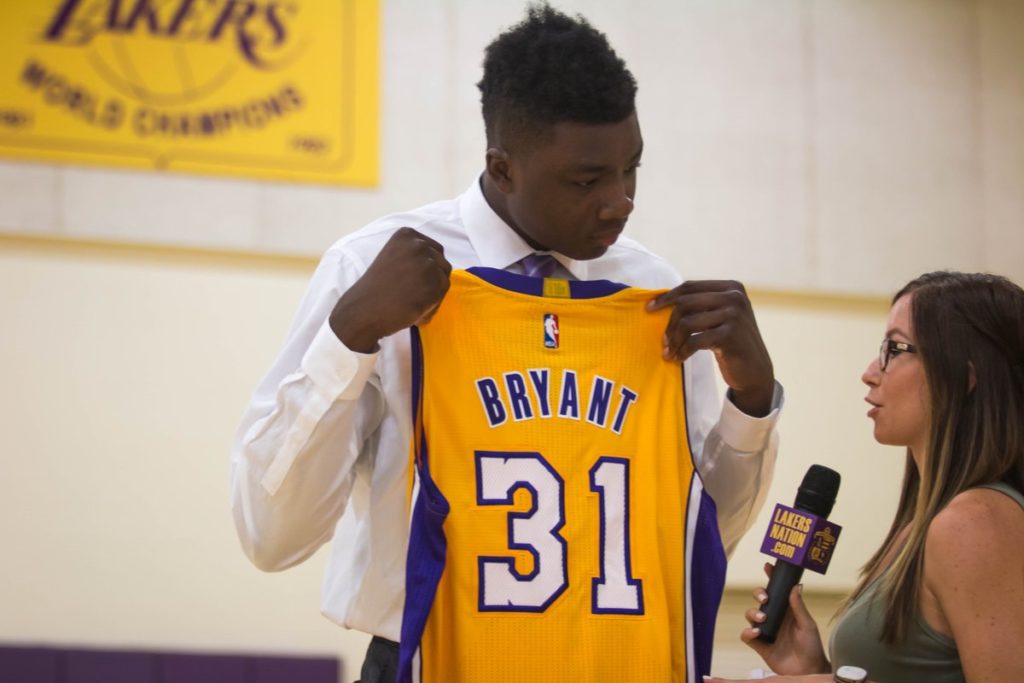 Does The Lakers Future Belong To A Kid Named Bryant?

The future of the second most storied franchise in NBA history is right now.

And it has little to do with the Los Angeles Lakers deadline trading for former Boston boy Isaiah Thomas from the Cavs. Although that may be the first Magic chess move that checkmate takes future(?) Hollywood King LeBron James from Cleveland to Lakerland.

But it has everything to do with that slow grind the young Lake Show and future Showtime have been putting in for just under a half decade worked. Ever since the injured Kobe stoppers hit the lottery they’ve chose the right numbers. Top tens or second round knockouts. Outside of maybe Philly only open doors have had better drafts than the Lakers over the last few years. First came Draymond Green like big-man Julius Randle and then Sixth Man steal Jordan Clarkson late in the game. And then the trend just snowballed like millennials that totally use words like “stoked” on the slopes of Pyeongchang.

A year later came the ice from the veins of D’Angelo Russell and the scorching slams of Sun son Larry Nance Jr. Then last season the biggest Durant like chance of a franchise face in Brandon Ingram and an even more pleasant surprise in talented big Ivica Zubac. But this campaign the team that has drafted tremendous talent like Noah’s arc has gone forth from their two-by-two nature over the last big-three years. Even if fans of this young core are steaming that the Lakers just let integral parts like Nance and Clarkson walk like Russell. Glue guys of this smartphone generation that highlight worthy fans wanted to stick around like screen burn. Even if they did get I.T. in return and even the cleared cap that may make space for the real ‘IT’ to take them out the gutter this summer in number 23 and even a hometown hero P.G.

This season however the purple and gold have gone from the wine cellar to a potential eight seed haterade upset. And it isn’t just because of their Hollywood big baller drafting of Lavar’s son. Although if you’re really watching the new number two ball then you know you are watching the post-Mamba moment, Lonzo Angeles Lakers. Even if potential R.O.Y. Kyle Kuzma has shown he’s not only the Lakers biggest steal of recent drafts, but one of the biggest rookie sleepers in draft dud history.

But it doesn’t stop there for a team that’s so deep in youth they’ve even signed former guard Gary Payton’s son too. We’ve already detailed the Lakers defensive Hart before Josh got a start or even a high five. But it’s not just once, twice, or even three times a draft Jeannie for the Buss two times at once, waiting Lakers.

There’s another big kid ready to have a big future for the purple and gold Lake Show and he wears Bryant on his back like a snakeskin black Nike ‘City’ jersey.

No this Hollywood Magic machine hasn’t gone back in time and nabbed young Fro’be from the clutches of the basketball God’s. This isn’t 1996 people. Even if the Smashing Pumpkins have reformed and there’s a new Mulder and Scully series of ‘The X-Files’ networking right now. No this kid wears a number in the thirties like the giant greats of Shaq and Kareem. And the worthy 42nd pick Thomas Bryant wants to be the best two-way big in the game. Don’t scoff! Have you seen him block? And he’s got a real shot too. From downtown Pico, which you know seven foot expert from Brooklyn, Brook Lopez will help hone. Just like when he, Randle and would be teammate Russell worked out with Miami Heat legend Dwyane Wade this summer. Thomas has already along with fellow two-way South Bay Laker Alex Caruso made the mid-season all G-League team but wait until he takes a real Gatorade break and joins the big boy ranks of the big leagues. His Twitter name reads, ‘No Limit’. Can you handle it?

With guys like Bryant do the Lakers even need LeBron?