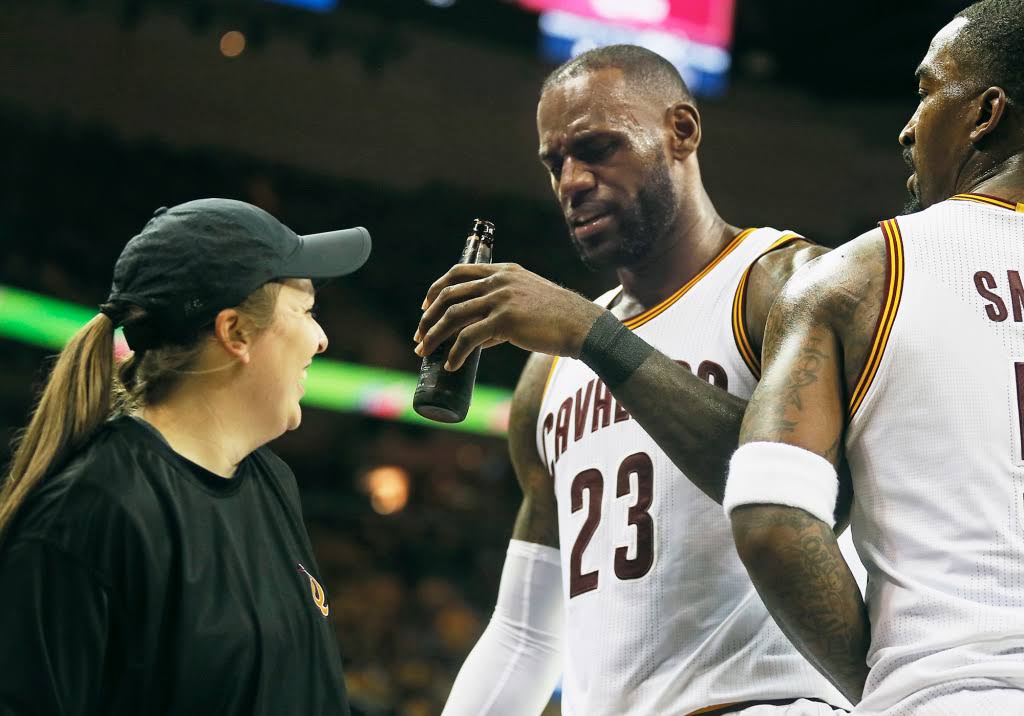 LeBron James Is The Troll King

Quick disclaimer. Trolling on the internet like cyber-bullies is for the cruel and cowardly. And we could never condone that. But when it comes to the face-to-face, one-on-one nature of the sport of basketball it’s all fun and games.

Even for the King and his latest subjects, Canada’s Toronto Raptors.

Tonight LeBron and his land of Cavaliers could sweep Toronto right out of the 2016/2017 NBA Playoffs, but he’s already knocking us off our feet with the jovial jokes and jibes.

First after one his signature breakaway Statue of Liberty dunks came his runaway talent careening into courtside where he met a member of the Cavs crew serving up concessions. Taking a beer from her hand and probably saving it from being spilt and cracked, James-to celebrating teammate and all round joker J.R. Smith’s amusement-pretended to take a sip of the suds. Before rightfully drawing it away from his mouth.

That would have landed him in more hot water with the NBA than vodka. But it turns out it was the Great Lakes brewery company out in Ohio that ended up facing a legal breathalyzer. After using LeBron’s likeness to flog more bottles in Cleveland, the King and his legal team stepped in to remind them of their rights and the fact that the first time LeBron left Cleveland in his decision to play for the South Beach Heat the same beer company brought out a brew called ‘Quitness’. And believe me this court has plenty of witnesses to that. Still, judging from the look on LeBron’s face with the beer in hand, Great Lakes might not want to use him as a sponser for their nectar after all.

Then the King briefly joined the Harlem Globetrotters mid-game. If you think finishing a dunk with a beer is good. Then how about starting a three pointer off against one of the best defenders in the L by spinning the ball on your finger? The only thing that was missing was ‘Sweet Georgia Brown’. Serge Ibaka and the rest of the Toronto Raptors weren’t impressed. But you best believe, sportsmanship or not, when ‘Bron calls it a legendary career and the highlight reel comes rolling around that move will spin right round for the record again.

Then as ‘More Life’ rapper and Raptor owner Drake waited in the player tunnel to console his personnel, or even greet the King and all his men, LeBron came through again. “Where are we going tonight”? He said to Drake on his night. “The margaritas are on me” he quipped. And he wasn’t talking about pizza.

As James is the one turning the 6 upside down, T-Dot fans are screaming “NINE” like Germans. It even looked like LeBron was pulling the Raps tails even more as he tugged reserve Norman Powell’s jersey as he walked off court and back to the bench. What really looked like a moment of un-sportsmanship like conduct was actually a grand gesture as he was actually preventing Powell and the Raptors for being whistled for an illegal subsitution. A tech that could have got the blow out beaten Toronto another bucket against them from the free throw line for the Cavaliers.

See the King is classy after all. And even though the Raptors look on the brink of extinction they can take it. Just look what they did to the deer roadside after the Milwaukee Bucks were dunking inflatable dinosaurs at halftime during the first round of their last series.

On any given sunday even a King could be fooled though, but we think we know who will have the last laugh tonight. And he’s averaging 34.3 points, 9.0 rebounds and 7.3 assists in these playoffs.

From a memes to gifs world of jesters who knew the King had such a sense of humour?

Off with our heads.