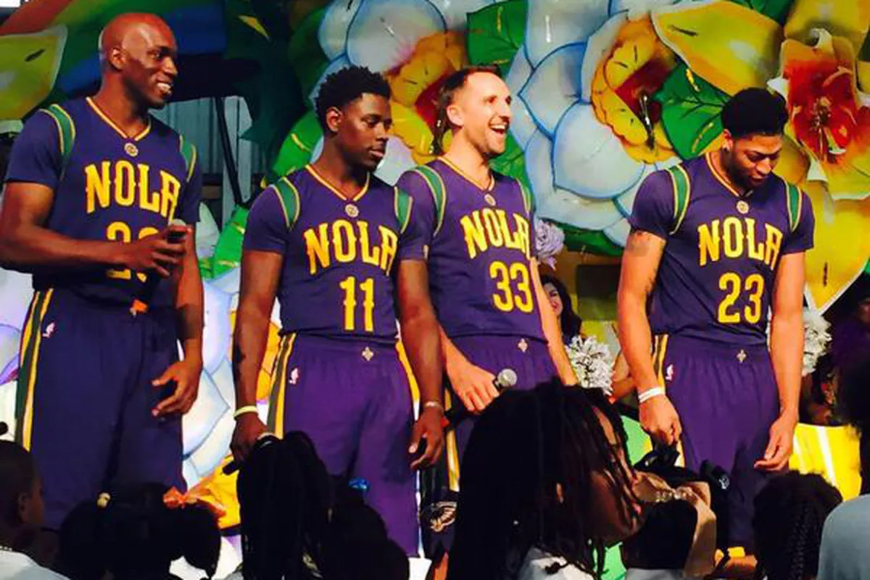 Sure Mardi Gras doesn’t come around until the second week of February next year, but you’re going to love this.

Last night there was a carnival in New Orleans as the Pelicans unveiled their new alternate jerseys for the 2015/2016 NBA season…and in doing so they brought the Mardi Gras back. In look and feel.

The last time the New Orleans basketball franchise rocked these special ‘Mardi Gras’ nights jerseys they where called the Hornets. Still, now the New Pelicans keep the sting of the vibrant, purple, yellow and green color ways, whilst adding some of those new NBA trademark sleeves.

Winter is coming after all.

Next NBA megastar Anthony Davis and his talented brass of teammates Jrue Holiday, Ryan Anderson and Quincy Pondexter unveiled these remodels to fans last night and they are colorful in more ways than one. In a Summer season of new jerseys that have seen everything from the Milwaukee Bucks paying tribute to their roots and the L.A. Clippers much abuzz about nothing with some ugly redesigns, these gaudy jerseys are as vibrant as those Atlanta Hawk neon ones and are the perfect homage to their cities time honored tradition. Especially with awesome attention to detail features like the Crescent City crest put on for the city of New Orleans that has been through so much but is now ready to shine.

Splitting halfway between home and away three times a piece, the New Orleans Pelicans will rock these court “costumes” 6 times next year through Mardi Gras season and these duds will find their place in a great locker-room of uniforms from the last couple of seasons home and away redesign and the red alternative that is already rich with the texture of vibrant N.O. tradition.

The “Pride” of these special sleeved jerseys feature the initials ‘N.O.L.A.’ across the chest and as players like Ant-Man Anthony Davis and his squad thump their chest in celebration during big moments in the big games where these jerseys are worn what more can you say? Those four letters say it all for the state of Louisiana and it’s flagship city. This is representation at it’s best. It’s more than a theme…it’s Big Easy love that’s going to be rocked from the French Quarter to the Mighty Mississippi.