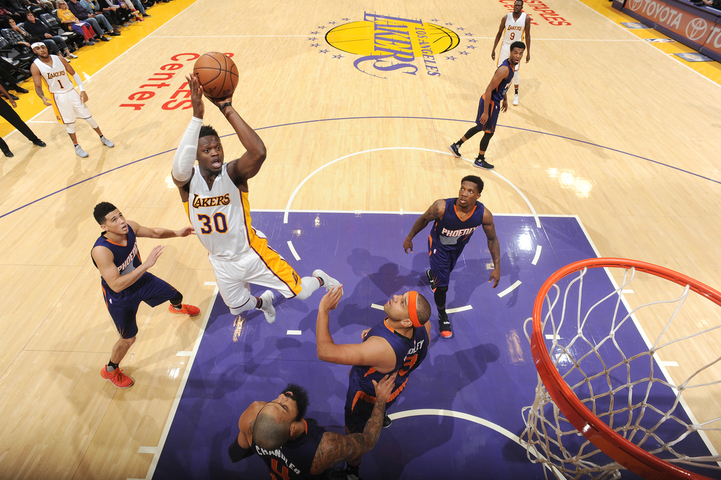 After their royale battle win against the Warriors superteam of Kevin Durant and Stephen Curry, new, young Lakers coach and former player and Golden State assistant Luke Walton feared these youngsters may crash and burn following the cloud 9 high of beating his old firm last week.

But they rose from the ashes of doubt against Phoenix, eclipsing the Suns 119-108 Sunday.

In the classic Sunday Whites it was all right for the purple and gold at home sweet STAPLES again.

Lead by Sixth Man spark-plug Nick Young, who started the game and finished it with a team high 22. The thirty year old, now one of the “oldest” players on this team now affectionatly goes by the name of Uncle P. But catch him styling downtown just a few streets away from Pico and you can see that the forever Young player still has that swag, making this town his. Those in L.A. worrying about him stupidly holding a firework in the offseason now know he has the flame thrower this year, as he lights it up like the cities futuristic skyline adorned by palm trees as tall as the Lakers legendary legacy of big men.

A different kind of one, almost in the mode of an Odom, “Monster” Julius Randle had a beast of a game too. With 18 points and one passionate and crowd and club igniting technical to go along with Tyson Chandler. As the third year pro jawing with a big man and player the Lakers always wanted in the post wasn’t afraid to go at Tyson in the fists and elbows paint, a basketball players boxing ring.

But it was Jordan who provided the knockout. His clutch K.O. three assisted by Julius brought this court duel to the canvas. Clarkson’s 18 was offset by brodie D’Angelo Russell’s 11 and 6 assists to go along with an untapped resevoir of ice in his veins. All dunking, former Cav champ Timofey Mozgov also had a big 14 and 8 as the three game win streaking Lakers moved to .500 and past the Kobe Bryant era.

Slam Dunk Contest worthy, standing room only crowd and roof raiser Larry Nance Jr. did leave the game with a concussion however. The kind of dazed and confused head shot he gives most rims and defenders domes. He’s a-OK thankfully, but the lane driving maverick and his 8.2 points and 5.2 rebounds per off the pine will miss the Lakers next game against Dallas.

Despite the legendary Lakers franchise looking like they have new legacy makers of their own it was Suns sophomore star Devin Booker who had the Mamba Mentality number 24 would be proud of with a career high of 39 points in the books. Assisted by the cash and carry of Eric Bledsoe’s 19 and T.J. Warren’s 22 the Suns scorched some of the Lakers gold glow in the Californian setting sun before the night was over.

Now this League Pass, one to watch matchup between two of the youngest, fun and freshest franchises in the league, let alone their division of the Pacific looks set to run and run like Steve Nash in his day.

And it’s clear to purple and gold hearts everywhere like the need for World Peace that Lakers Nation really does love basketball again.