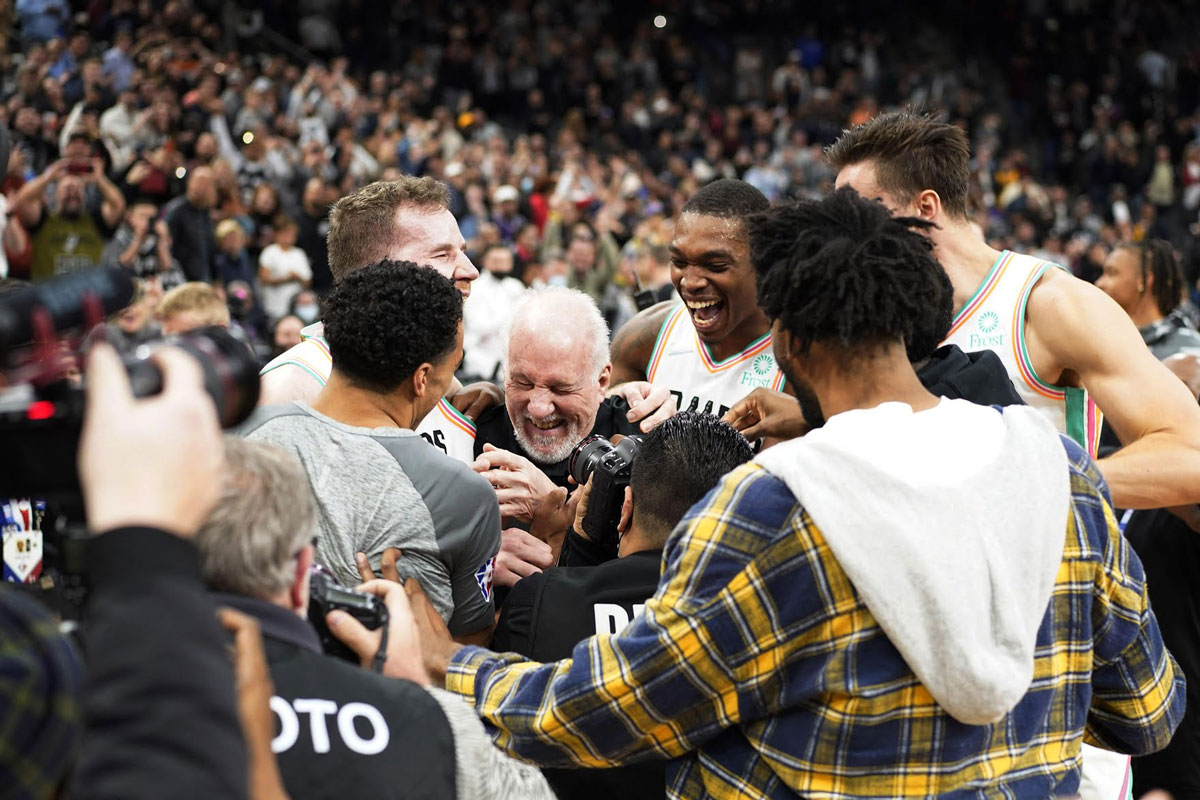 When you draw-up your list of greatest basketball coaches of all-time, who comes at the top?

You can’t even begin to run this play without putting in San Antonio Spurs lifer and leader Gregg Popovich.

It has been a week of made milestones. One that saw James Harden move past downtown legend Reggie Miller for third all-time in made threes. Not to mention a stretch of seven days that featured a record two 50 point games from 37-year-old LeBron James. The King on his way to being the only member of the exclusive 30,000 points, 10,000 rebounds and 10,000 assists club.

But how about this?

Fresh off leading Team USA to Olympic gold in Tokyo last summer, Popovich has just coached his way to more regular-season wins than anyone in NBA history.

He even cut his now Gandalf famous white hair for the occasion, as the basketball wizard was mobbed by a band of young Spurs in their classic city jerseys.

The previous win total was held by another Texan team titan in Don Nelson with 1,335 wins, but Pop goes that record in the triangle.

A 104-102 victory over the Utah Jazz at home sealed that deal perfectly to a standing ovation.

Add that up with many playoffs Popovich has taken his San An team to, and that brings us to a benchmark of 1,526 dubs.

From David Robinson to Kawhi Leonard and all the Tim Duncan’s, Tony Parker’s and Manu Ginobili’s in between for the Hall of Fame coach to one of the most underrated and storied teams the new millennium of the league has ever seen.

Put the San Antonio Spurs banners right next to the legend of the Lakers and the Boston Celtics.

Must Read:
Wade In The Rafters. The Heat Rises To 3

And Coach Pop in an old school class all by himself.

Beating Boston 99-97 in January, Gregg became the first ever coach to lead the same team for 2,000 or more games. He’s been at the helm of the franchise since 1996. That’s the year Kobe, Iverson and Steve Nash were drafted. His 22 straight seasons in the playoffs from 1998 to 2019 speaks for itself as another one-of-a-kind NBA record.

To mark this week’s milestone the Spurs celebrated the occasion by making 1,336 NFT’s (still have no idea what they are) available for sale with the proceeds going to the San Antonio Good Bank.

With enough rings for one hand and so many pages in the record books to make his own name storied, the coach with the .658 winning percentage is the now the Big Poppa.

The Spurs have never clicked quite like the first time Gregg Popovich entered the coaching saloon.

Tip your hat to him.