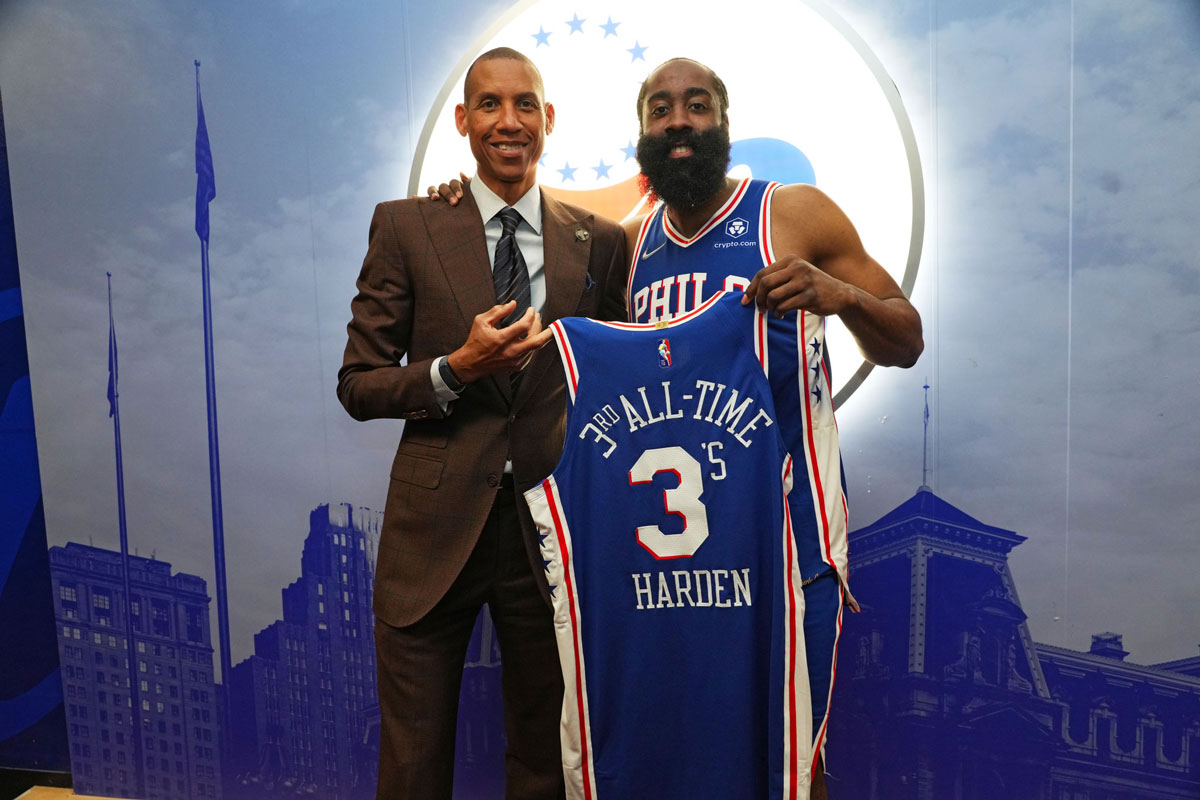 Like the way of Dwyane Wade trading uniforms like cards, jersey tributes are a thing of basketball beauty.

Remember the thrill of the first time you put your own name on the back of your favourite teams jersey for an online order? How adding your lucky number just made the fitted even more fitting.

Well, how about the one Indiana Pacer legend Reggie Miller mocked up on Thursday, courtside in Philly?

Rocking the number 3 PHILA blue, Sixer special with the name Harden and a statement for the real number 1.

Wearing it backwards and popping it like a shirt collar as James Harden surpassed him to become number three on the NBA’s all-time list of three-point leaders, with his 2,561st downtown bucket.

It’s crazy to see Harden as a Sixer. We were still getting used to him in the B.K. It’s even more insane that he’s already this high on the ranks of perimeter power legend. Even though he likes to shoot more than Kobe with a rolled up tube sock. But dear basketball, forget any controversy. James Harden is history.

The former Rocket soaring past the old villain of downtown in a game against his last team he just left, the Brooklyn Nets.

It’s Harden time now. Now he has Jesus in his sights as Ray Allen sits at number two with 2,973 made shots from the range. Shuttlesworth did this in 18 seasons. Lucky for James, right now he’s only at 13.

But neck-and-neck in years played it doesn’t look likely he’ll outdo the new logo of downtown and three-ball God of Steph Curry, with over 3,000 shots (3,093) in this contest. That would be quite a splash.

There’s nothing wrong with a podium place though in this holy trinity of made threes.

Scoring a step-back three over former teammate Kyrie Irving, a man as lethal as he is at a distance, just made it even sweeter for James Harden in this separation he created like his spot-up spacing. A bump and go move akin to a Kareem sky-hook signature like his patented Eurostep is. And just as much of a sure thing, pure bucket. Simply unstoppable.

“I’m blessed,” Harden told press after the formidable feat. “I’m fortunate to be on that list, high on top of the list. And I’ll do whatever it takes to try to catch Steph. [It’s] going to be difficult, man.”

552 to go. And that’s if Steph Curry never takes another shot from downtown in his life. There’s more chance of James shaving his signature beard than that happening. But no matter, this certification is engraved in the history books. Harden is a cut above the majority of the rest. Including Reggie.