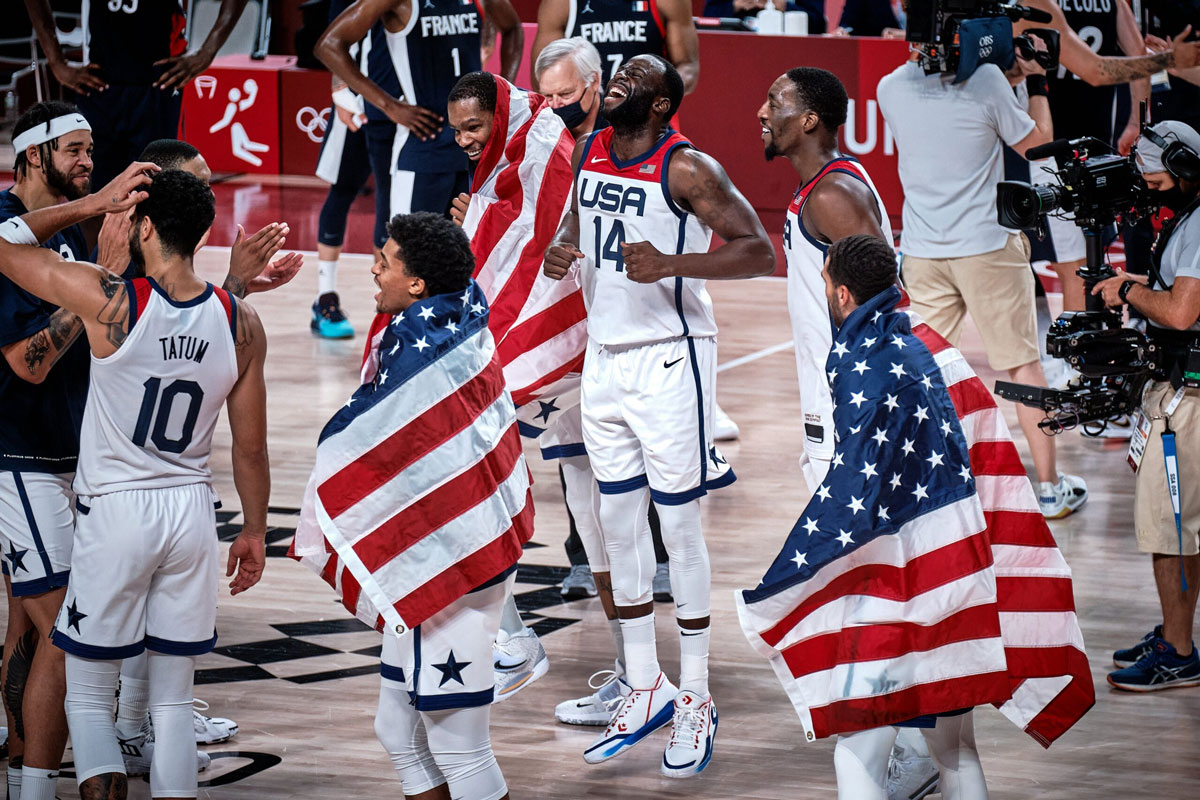 It wasn’t inevitable. The game is just too global for that these days…and that’s a great thing.

This was a real team.

Winning their fourth straight gold. After Beijing, Rio and London, Team USA beat France 87-82 in Tokyo for the gold medal a day after the host nation Japanese women’s team knocked out France in the semis.

After failing to qualify for the 3×3 tournament the men made their mark on the full-court. Now it’s up to the GOAT’s of Diana Taurasi, Sue Bird and company to do the double not only across 94 feet for Team USA, but also in both basketball Olympic events for the women.

In the Saitama Super Arena, Kevin Durant dealt the one punch that the French couldn’t get up off the floor from. His 29 points led the way for a team that’s still so stacked with talent he could have scored five and got away with it. Now with three podium places he ties the US basketball Olympian legend in new Los Angeles Laker Carmelo Anthony for most medals.

Working France like they did neighboring, storied Spain in the semi finals game, the US mined gold instead of stealing it like the show. All in all this workmanlike approach just showed how much more competitive these contests are these days on an international stage. It also proved how NBA hoopers can adjust to the FIBA game in all its rules and regulations.

It also told us guys like Durant reuniting with Draymond Green and young studs like Devin Booker and Jayson Tatum are all X and O purists on a King, Kobe or ‘Melo level for coach Pop.

Especially coming off back-to-back seasons with no days off. Something that broke most players as last years Bubble finally burst.

Must Read:
Canada at the 1960 Pre-Olympic Basketball Tournament

Even the Stiffel Tower of Defensive Player of the Year Rudy Gobert (16 points and 8 rebounds) couldn’t stand in the way of these US warriors that came out to play like two empty Coke bottles clacking together.

Tatum had 19 off the bench. Whilst the backcourt combination of Buck champ Jrue Holiday and Damian Lillard clocked 11 apiece.

What a holiday its been for Jrue after his championship ring. Flying straight into the rising sun after his parade day reign. He now has gold hanging from his neck too. Soccer legend Lauren Holiday knows just what that feels like, congratulating her love on Twitter.

France ended with silver like they did back in the year 2000. But at least this time they didn’t have Vince Carter dunk all over their heads. But forget ‘le dunk de la mort’. This was the game of death like Bruce Lee.

And for the USA team that was as good as gold.