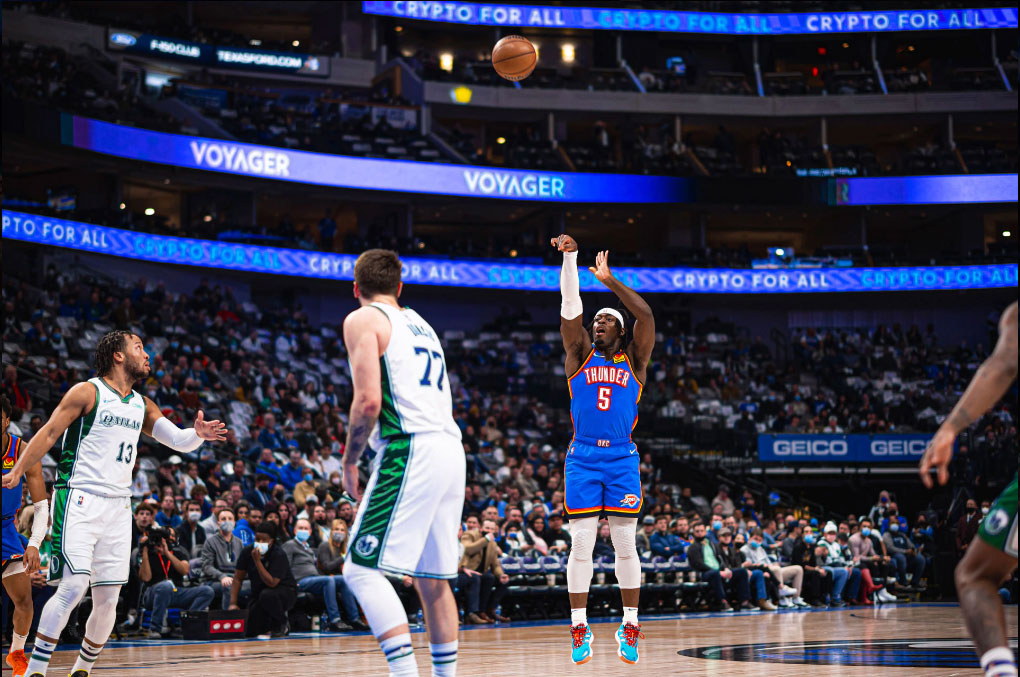 Two years ago, playing in his first NBA Playoffs series, undrafted Canadian rookie Luguentz Dort stamped his arrival on the NBA scene as a defensive stalwart.

For six entertaining games, Dort swarmed Most Valuable Player (MVP) candidate James Harden and introduced all of us to the Dorture Chamber.

Ridiculed for his abysmal 5-of-32 (.156%) three-point shooting over the first five games of the series, including 0-for-6 and 0-for-9 J.Dilla, E=MC² donuts, in games’ two and five, many were expecting Dort to lose his confidence and stop shooting.

Instead, the exact opposite transpired, Dort snapped for a 30-piece in the decisive seventh game and like a Drake album, nothing has ever been ‘quietly’ the same.

The Thunder bowed out in a tight 104-102, one possession game, with Dort nailing 6-of-12 triples to kick-start one of the best three-point shooting transformations right before our eyes.

That is, until Luguentz Dort took those “can’t shoot” insults personally and started shooting.

In 48 games played thus far this season, Dort has knocked down a total of 122 three-pointers on 365 attempts (33.4%), by far the most by any Canadian during the 2021-22 NBA year. Andrew Wiggins, a first-time All-star, is the next closest with 111 made triples in 270 attempts, followed by former New Orleans Pelicans guard Nickeil Alexander-Walker with 95 and RJ Barrett not far behind with 92. The recently traded Alexander-Walker is also second in attempts with 305 and counting.

Trailing Nash by only 57 three-pointers with a 29 regular season games remaining, Dort is well on pace to surpass the 14-year-old record.

The twenty-two-year-old Montreal native is averaging 2.5 makes per game on a staggering 7.6 attempts. Dort hasn’t shown any signs of slowing down, coming off a career-high 12 three-point shots in his last game against the Golden State Warriors.

Must Read:
Big In Japan...Time For The NBA To Get Ready For Yuta Watanabe

At this rate, depending on how many more games he plays down the stretch, Dort should be able to knock down anywhere between 60-75 triples. Good enough to set a new Canadian single-season NBA three-point record.

Dort scored a three-pointer in 46 consecutive (March 18, 2021 – Dec 29, 2021) games, the longest streak by anybody not named Stephen Curry. Since then, the Canadian has strung together 16 games with a made three-pointer.

Curry, the all-time three-point shot maker, drained the most threes in a season, connecting on 402 long range bombs in 2015-16. The Golden State sharpshooter once again leads the pack this year with 233 made triples. James Harden is the only player in NBA history with over 1000-plus attempts in a single season, jacking-up 1,028 triples during the 2018-19 campaign with the Houston Rockets.

Although, it is not entirely surprising to see this record fall, given that the NBA has gone to a “shoot three, ask questions later” league. What may be somewhat astonishing is that Dort is the one, eclipsing Nash’s best single-season three-point total mark.

Denver Nuggets guard Jamal Murray came close to touching Nash’s record in 2017-18, burying 165 triples in 81 games. In fact, both Nash and Murray are the only two Canadians to have hit over 150-plus triples in a single season.

The two, also occupy the top five spots. The other marks include Nash with 156 triples on two occasions and Murray with 152. Murray (436, 414) and Dillon Brooks (411) are the only Canadian NBA players to ever attempt over 400-plus triples in a single, a mark Dort will easily eclipse in the coming weeks.

Who knows, maybe, one day we will see Dort at NBA All-Star Weekend draining triples in the three-point contest. Based on his work ethic alone, it wouldn’t be surprising to see him there, hoisting up the trophy at the end of it all.

Until then, keep shooting.