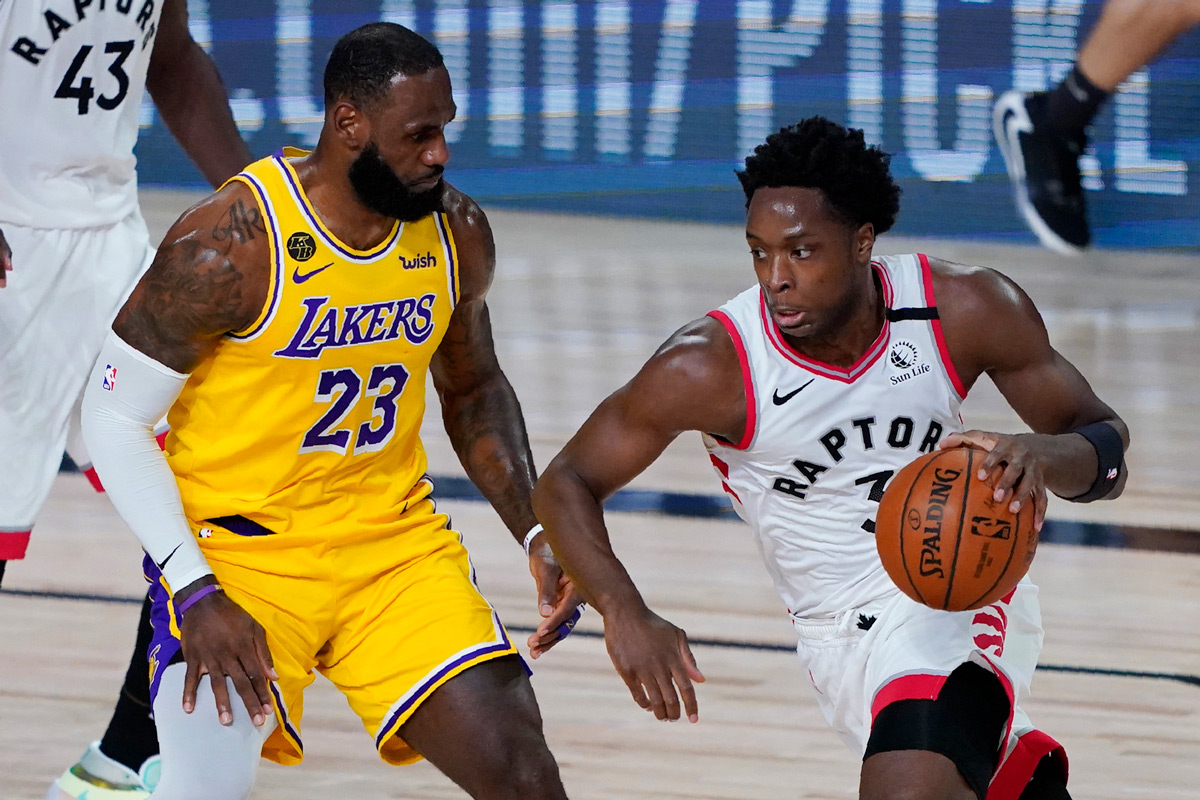 The defending champions Toronto Raptors came to the NBA bubble with one goal in mind.

145 days since their last official regular season game the raptors picked-up exactly where they left-off by beating the Los Angeles Lakers 107-92 for their eleven straight win over the historic franchise.

Kyle Lowry, the heart and soul of the Raptors dominated the much anticipated game with 33 points, a career-high 14 rebounds and 6 assists. The six-time NBA All-star knocked down 8-of-16 field-goals, 5-of-9 triples and 12-of-15 free-throws in one of his finest outings of his 14-year career.

The Raptors got off to a crisp 13-0 run, showcasing their unselfish traits by dissecting the Lakers with precise ball movement and aggressive team defense.

“Great team.” LeBron said of the Raptors post-game. “No if’s, and’s or but’s… well coached… Championship DNA. The media may not give them as much credit because Kawhi is gone but players know what type of team they are.”

LeBron James is now 0-4 against the Raptors since the joining the Lakers in 2018. Toronto earned a pre-covid-19 signature road win, beating Los Angeles 113-104 at Staples Centre.

The last time (Nov. 30, 2014) the Lakers beat the Raptors, Barack Obama was in the White House instead of that dump Trump. It was a better time. Muhammad Ali and Prince were also still alive. Kobe Bryant too. As he put up a triple-double of 31 points, 12 assists and 11 rebounds and the rest of his team on his back to beat the team he once dropped 81 on.

Right now the Raptors are the kind of team that could hold another one to 81 with stellar defensive tactics and rotations.

Defensive as their season for the crown that’s theirs until someone else takes it from them.

It’s going to take a freak move to do so though, as these Raps wrapped up the Lakers in the bubble, hotter than the Florida sun.

These Dinos’ turned ‘Bron into a Brontosaurus. Former ring bearing Raptor Danny Green couldn’t even buy a bucket. As dry as a Florida town expecting rain. Even Anthony Davis was limited to just one first-half point, finishing with 14 after a big night clipping the Clippers’ and leaving Reggie Miller’s commentating sounding like the Pacers legend was a cartoon villain twiddling his mustache, or a chef taste testing today’s soup.

That noise last night belonged to the Raptors’ pack that sounded like the Jurassic Park of fans was actually in the Disney World arena, instead of behind the perimeter fence of a jumbo-tron screen, zoomed in via satellite.

Even OG LeBron James was held to 20 by another OG. Anunoby had 23 and the back of James jersey all night. Defending him like the throne that isn’t the King’s, no matter how many tweets say it. He also had four rebounds and an assist. Going 8-for-9 from the floor and perfect 3-for-3 from downtown like Danny Green wishes he was against his former team.

Or maybe he wishes it was this time last year. A champion still in Canada. As the Raptors’ show that even without Kawhi, they are still the team to beat. From Pascal Siakam to the next Most Improved in OG Anunoby…rhymes with Obi Wan Kanobi…and of course, you know who.

Marc Gasol, Serge Ibaka, VanVleet from downtown and of course Kyle. Still the most underrated superstar in the league like his two dynamic duo teammates used to be. These Raptors’ have everybody and can beat anybody. Not on their night. On any given night.

Must Read:
An Outlaw King Is Too Much For A Texan Maverick

Talk that talk, but have you ever heard a Raptor roar?

You’re about to, and no bubble can contain it.