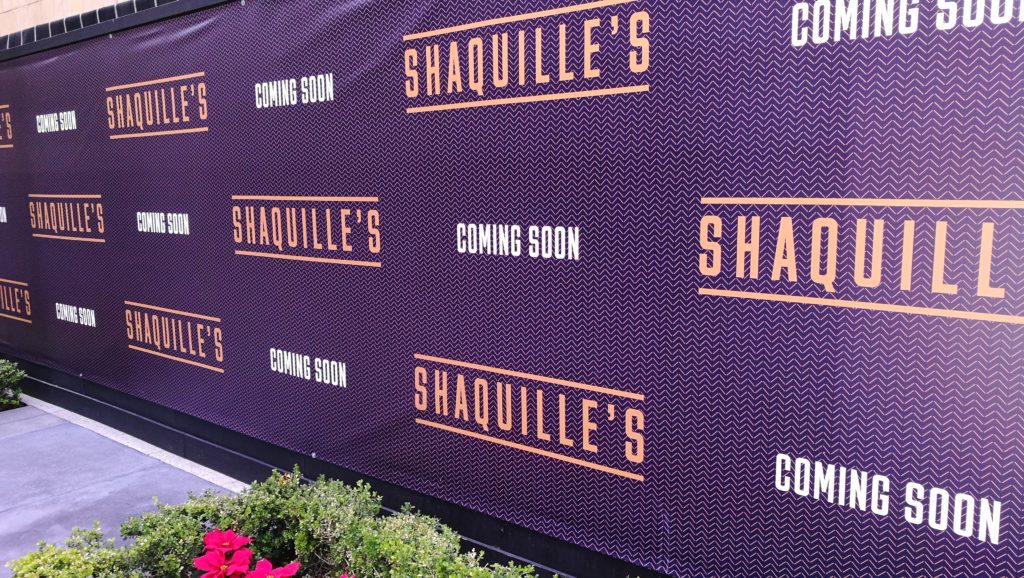 With that Kanye West may have had one of the best Basketball lines in rap history on the remix to Ghostface Killah’s ‘Fishscale’ hit ‘Back Like That’, with R&B singer of the music matrix Ne-Yo on the hook. But now that offering is becoming a menu reality.

Are you ready to order?

The Big Aristotle may sound like a meal in itself, let alone a mouthful. But the number 34 legend of the Los Angeles Lakers O’Neal opened his own restaurant, ‘Shaquille’s’ on the 8th Feb. Right in the heart of STAPLES and Lakerland with his newly coronated, bronze, dunking statue watching above.

Across from the neon of the Lakers home-court STAPLES Centre in the electric, entertainment hub of L.A.’s Nokia Live, answering the call to bring the pulse back to downtown Los Angeles. Purple and gold boards reading ‘Shaquille’s’, “coming soon” have whet fans appetites since the beginning of the season. And following some ‘Big Chicken Shaq’ joints out in Vegas, the Big Diesel is fueling up the grills to give you your perfect pregame meal and the bar to not pass on the way out for a drink for your postgame water cooler analysis. Whether your clinking glasses are toasting a W, or you’re drowning your sorrows after King James and them couldn’t sink those clutch free throws like you know who.

But all joking aside this Big Comfort Food restaurant looks like the perfect diner for all your sports bar needs. With big helpings of flavor like the Most Dominant Ever himself your plates are about to be covered more than Shaquille O’Neal in the paint. With Magic like his time in Orlando ready and what is being served up as “Southern hospitality with a modern flair”, the man who owned the game like Wilt, but with his own ‘Kazam’ twist below the basket is giving us all what our rubbed bellies are wishing for over three courses for the four quarter beast. Pick your play from the kitchen roster. “Fried green tomatoes, shrimp and grits, mac and cheese, and corn pudding”. “Pan-roasted salmon, roast Jidori chicken, flat-iron steak, shrimp ceviche” and of course a big Shaq burger that you never know may be seven feet plus when you try and tower it like a helpless defender. That just may need a double team sharing platter. But can we suggest the Derek Fisher sandwich, A.C. Green salad but hell no not a Rick Fox burger…no offense champ. And we can’t wait to wash all this down with some Shaq shakes. Although plenty of Southern California beers are on tap along with a vineyards worth of wine for LeBron.

So next time you’re about to take in the big game live in L.A. how about a big meal to get you started? You can’t miss the sign. It almost dwarfs his statue that rises above Magic, Kareem and all the other Showtime that’s now served here too.

And oh yes, Big Shaq is in Japan too. Coming back with some Far East burgers for your taste bud tickling. The funniest character in NBA history couldn’t resist. There’s Kobe beef again. But never fear like wondering whether your meats deer (or dear mind you for you ‘Green Book’ misspellers…no don’t worry prices are fair).  There’s no reason to sing War’s (seriously here…what is it good for? I’d tell you…but you know the rest) ‘Why Can’t We Be Friends’ like the ‘Hobbs & Shaw’, ‘Fast and Furious’ spin-off trailer or that “EVERYBODY HIT SOMEBODY” scene in basketball epic, ‘Semi-Pro’. It’s a Kobe special. The only other beef burger on the one, two punch menu of sliders for the perfect partnership of the greatest dynamic duo to ever lace them up like chef aprons. The Kobe beef burger is rumored to come with five onion rings (almost as tasty as championship ones) and an amazing in more ways than one 81 fries (you’re food babies will be glad he was standing ovation taken out of that historic game before he had chance to wilt Chamberlain’s record).

Oh and the price of what sending boats to Japan will end up being a fan favorite chefs choice?

Now that’s one check you’ll want to pick up.