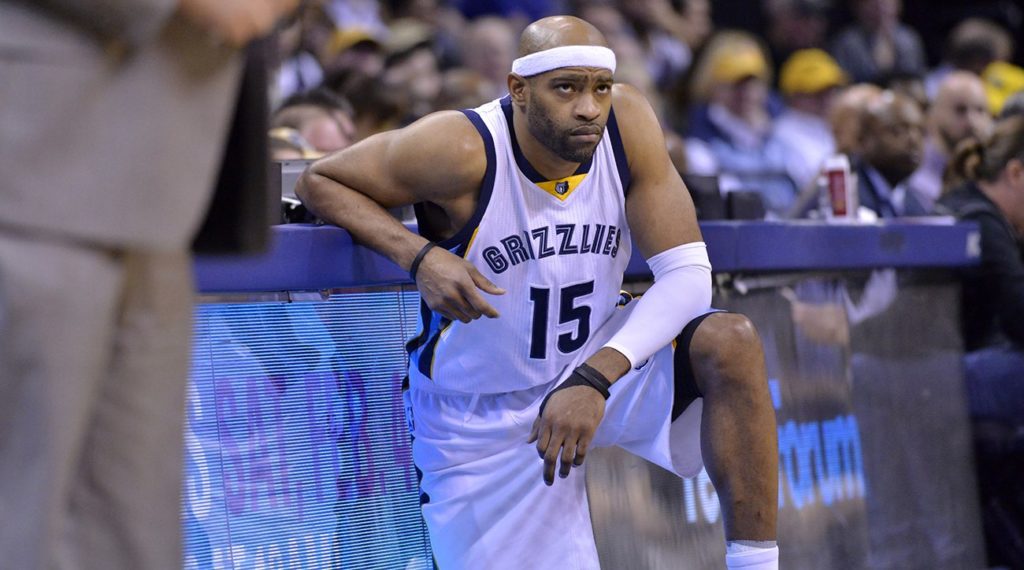 Time To Embrace The Vinsanity Whilst It Lasts

Last week the Buzz was in Toronto as was Vince Carter as the former Vancouver Grizzlies now rocking in Memphis rolled back up north to Canada.

But what on broadsheet paper looked like a sweet story/spiritual homecoming for the Raptor legend/to some frenemy was put into check by the stars hip, in what looks like on scouting report paper the 40 year olds last season in the NBA and therefore game in a place where he was once the north.

And even chants of “We Want Carter” for the former Mr. Air Canada from the A.C. Center faithful that circulated like air conditioning didn’t give the Grizz any push to allow him to let off some steam.

But then again you can’t beat the buzzer on father time.

Still as V.C. looks to shoot his way to the same retirement halls as court contemporaries Kobe Bryant, Tim Duncan and Kevin Garnett gone and Paul Pierce going. It’s time we watched him run whilst critics put him out to pasture.

Because this guys still got hops like people with white moustaches have milk. That’s a big part of the reason why the Air Canada Center wanted to get Carter last week. And even know they didn’t for this years All Star Game gone in Toronto, New Orleans might have him next February for a legendary return to the Slam Dunk Contest one last time. And he couldn’t just still compete…he could still win this thing.

And here at Basketball Buzz we want to see Vince take-off from the free-throw line, 360 and honey-dip it more than this Laker fan writer wants to see Larry Nance Jr. compete like his father did and he should have done last go round.

Must Read:
Protect This Curry House

So it’s not just the citizens of Toronto that want to watch tha Carter before he crosses his career and underlines it with a T-Dot. Carter’s vintage number 15 dino jersey still hangs throughout the 6 (a place that onetime wanted to do the same to him…figuratively speaking that is), despite him leaving under bad circumstances. Some places next to the purple and white throwback of his cousin Tracy McGrady…who left under even worse circumstances. The family ties of Vince and Mac made for a new dynamic duo for the ages in the Shaq and Kobe era that could have been a new milleniuum Michael Jordan and Scottie Pippen and big-time success for the Raps before DeMar DeRozan and Kyle Lowry. But like the potential of McGrady and injury prone, career crippled Grant Hill in Orlando this magic just wasn’t to be. Even though on his own Vince took these fantastic beasts where many thought you would never find them, away from grizzly bear like extinction. Almost taking them higher than the CN Tower that needle point pins this city like Google Maps, before all on his shoulders too Allen Iverson got in his way and then the Chris Bosh generation replaced him.

After Canada Carter had plenty more highlight reels and career chapters worthy of a bookmark, no footnote in the National Basketball Association in the United States. He had a devil of a good time in New Jersey tearing down Nets with Jason Kidd and he even played in Orlando himself like his cuz inbetween stints in Dallas and Phoenix.

But even though he now seemingly appears settled in Memphis, apart from the fact/opinion that his spiritual home and origin story like the Grizz belongs up north (and then again have you heard about the trade rumors? How about one last time in Toronto after all?). He truly belongs even higher than all of that and this. Taking residence above the rim like the Jordan like Nike Air that looked like it would always keep him there. So whilst scrolling through Instagrams and Snapchats of his career dunks perhaps it’s time to glance up from your phones and take one last look at the insane talent of Vinsanity.

Because from here, even at this point…it looks like Air Carter is never coming down.