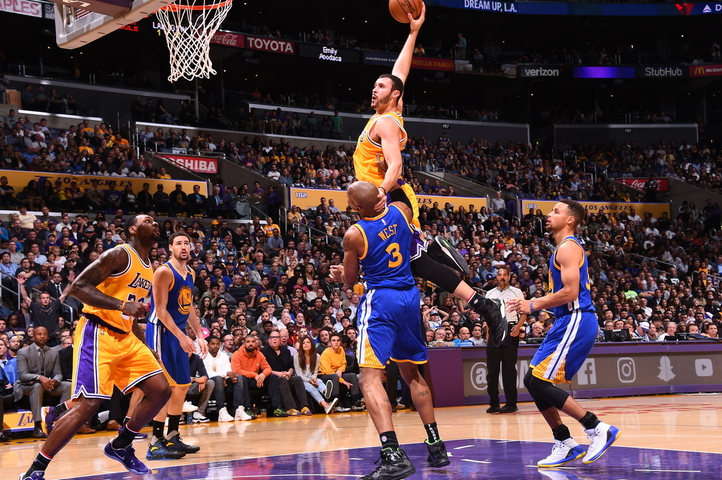 Call it an upset, but some suspected rookie head coach and former Golden State assistant and interim leader Luke Walton had another dry erase pen up his playbook sleeve. As the young Lakers family we are now going to dub ‘The Waltons’ shocked and blew out his former dubbed Warriors 117 to 97.

It must be the jerseys.

Because in this California clash for all the nuggets like Denver, the Lakers rocked the 80’s throwbacks like they will three more times this season. And the old Magic and Kareem jerseys turned out to be a real good look (and luck) as the young Lake Show brought Showtime back. Rewriting the ESPN script and defeating the Kevin Durant, Steph Curry, Draymond Green and Klay Thompson NBA “villains” in a shock twist you only get in Hollywood.

Marvelling in their own Mitchell and Ness, this coastal battle in Los Angeles really had the makings of a hardwood classic as the Lakers own Fantastic Four of Julius Randle, Jordan Clarkson, D’Angelo Russell and Brandon Ingram caught fire.

I guess the heroes gave their young pretenders too much praise pregame.

Because even though K.D. and his 27 points were on the Warrior king battle form that saw him win the war with Westbrook in his OKC return just the other night, the Lake Show showed out. Whilst Steph Curry had nothing downtown in Pico, as his streak of 157 consecutive games with a three pointer, stretching over three seasons was sent back to the kitchen so cold.

This in the Lakers house was an even bigger night than New York Knick Derrick Rose’s Chicago homecoming return.

Quarterbacked by matured, sophomore stud Point Guard, who was just “tired of losing”, D’Angelo Russell in 80’s headband and blown out hair (an omen of what was to come), everyone was on the form that makes these raw players look ready for the big leagues, time and rings of the future. As Toronto Raptor owner Drake left cold for cool, Canada for California to watch courtside at STAPLES, it ended up not being “Steph Curry with the shot” that he caught Jack Nicholson views of.

Instead Julius Randle lead the show with a double decadence of 20 points and 14 rebounds. As what should have been a slam dunk for the Warriors turned out to be a lay-up line for the Lakers. With Flight 7 Larry Nance Jr. taking off with the tomahawk in the new Lob City and Jordan looking like Eddie Jones in the number 6 trimmed throwback as he caught air up there too, two-handed. Even “elder statesmen” Lou Williams got up (like monster Mozgov seemingly does every game now like Nance), as he continued his rise after soaring against his hometown Hawks in the Lakers first back-to-back win in Atlanta. His ‘Sixth Man Of The Year’ auditioning 20 hit big from outside like Young, another “old” off the bench spark-plug for this youth movement.

And to think Draymond Green text his former Warriors coach Walton late last night to tell him how excited he was at the thought of what he was going to do against the Lakers.

Oh and the Lakers held everyone under 100. How do you like them tacos?

Call the Warriors new bogey team Lakers that shock beat them last years win an upset, but it’s more like a statement.

Through the wire these big-game worthy Lakers incredibly never trailed, as in honouring the 30th anniversary of the 1986/87 champion team this academy of gifted youngsters showed the heart of the City of Angels that purple and gold shines again.