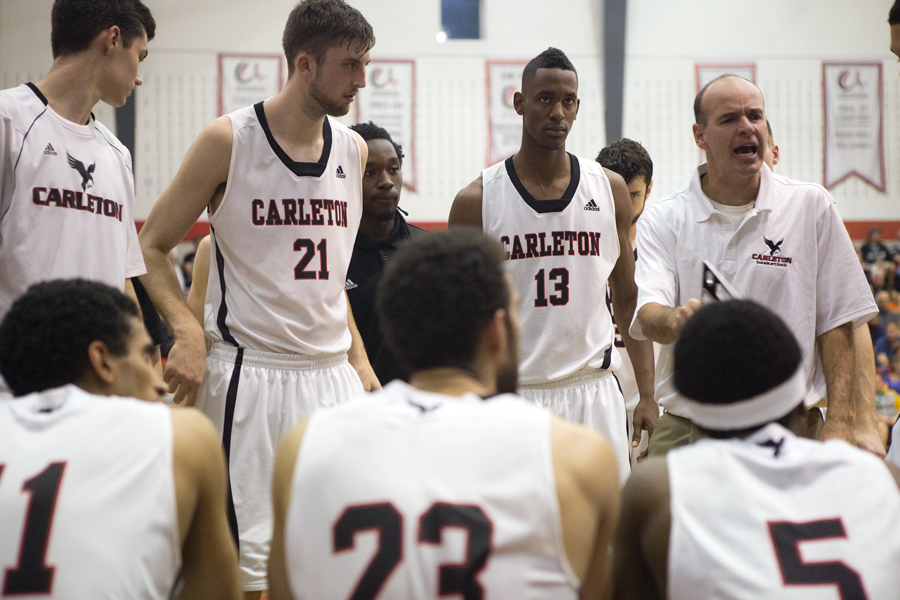 Victoria, B.C — Playing on the same floor which their father Lloyd Scrubb did for the Victoria Vikes in 80’s, brothers Philip & Thomas Scrubb and the Carleton Ravens romped through the West Coast capturing the 2014 Guy Vetrie Memorial tournament in convincing fashion.

Carleton the four-time defending champion went 3-0 against Top 25 competition beating the Bishop Gaiters 83-63, tournament host Victoria Vikes 80-64 and the Alberta Golden Bears 69-52 to improve to 7-1 in preseason and 3-0 against CIS teams. The Ravens only loss this season has come at the hands of the Indiana Hoosiers (95-85) in early August when they were without head coach Dave Smart and league MVP Philip Scrubb who were both on international duties with Canada’s Senior Men’s National team.

Both Alberta and Victoria are expected to be contenders in the Canada West and could return to the CIS Final 8, hosted the by Ryerson Rams in downtown Toronto in March 2015. The Bishop Gaiters have been knocking on the door for the past three-season, coming-up short in the RSEQ’s conference title game and are expected once again to challenge the McGill Redmen from Quebec’s supremacy.

Philip Scrubb continued his torrid start to his fifth and final season with a 23-point, four rebound performance against RSEQ contenders Bishop Gaiters, torched his father’s former team (Victoria Vikes) with his third 30-point game of the season finishing, with 32 points, six rebounds and four assists while erupting for 22 in the second-half.  Scrubb ended the tournament by dropping a mint 29 points on 11-of-19 shooting and dishing out seven assists against Alberta.

Thomas Scrubb a fourth-year 6’7″ hybrid forward for the Ravens also had an exceptional weekend as he continued to make his case for a First-Team All-Canadian nod, alongside his brother Philip.  Thomas registered 16 points (8/15 FG’s) and 15 rebound double-double against the Gaiters. Like his brother, he assaulted the Victoria Vikes in their second-game of the West Coast swing by scoring 22-points first-half, including the first nine points on three-constructive triples, he finished the game with 24 points and 9 rebounds on 10-17 shooting.

Outside of the Scrubb brothers the Ravens rotation continues to see a steady improvement, specially down-low as third-year 6’8″ forward Jean-Pierre Charles (Ottawa, On) had two solid efforts, recording 9 points against Bishops and 7 points and 6 rebounds in the Alberta win. 6’11” sophomore Cameron Smythe (Vancouver B.C) had his best showing of the young season with 11-point effort against Gaiters. Against Victoria, the Ravens had no answer for 6’10” forward Chris McLaughlin who beat them up inside repeatedly, showing Carleton’s one glaring weakness. McLaughlin finished with 20-points and 9 rebounds despite facing double and triple teams for much of the 1st-half.

The Ravens return home and will continue their 2014-15 preseason schedule by hosting the House Laughton Tournament (Oct 17-19) at Ravens Nest. Carleton will take on Acadia, Waterloo and Laval and will wrap-up the exhibition portion of the schedule on Nov 2nd at the Carrier dome when it faces Jim Boeheim and the Syracuse Orange.