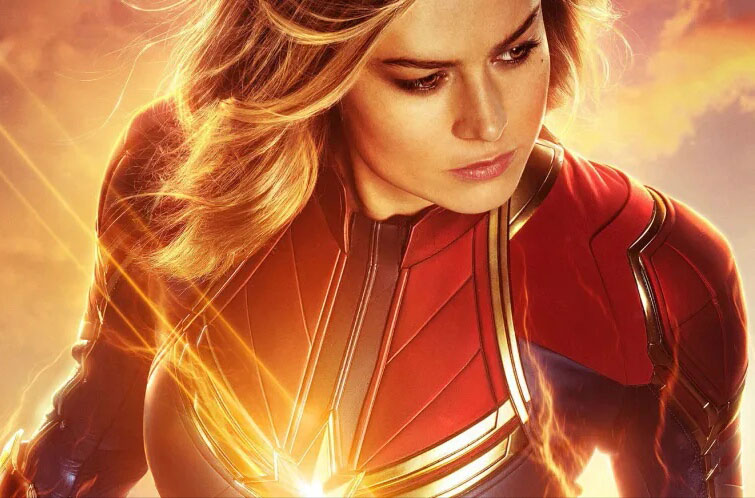 Captain Marvel And The Wnba Ask What Makes A Hero

HIGHER. FURTHER. FASTER. Since it’s Superbowl spot touched down alongside the Avengers ‘Endgame’ she’s set to save following the ‘Infinity War’, the excitement for the new ‘Captain Marvel’s movie has reached epic levels. More than Marvel’s answer to ‘Wonder Woman’, the first true blockbuster of the calender, setting up her own assemble like ‘Black Panther’ last year is set to run the world like girls. Starring ‘Room’ Best Actress Oscar winner Brie Larson as Carol Danvers, Marvel are finally rolling their sleeves up and showing a superwoman’s worth. And the massive movie also starring ‘Crazy, Rich Asians’ star Gemma Chan, Annette Benning, ‘Avengers Assemble’ star Clark Gregg back on the big-screen after ‘Agents Of S.H.I.E.L.D’, Jude Law and Samuel L. Jackson as Nick Fury, shows in its empowering advertising campaigns that you can’t spell hero without H.E.R.

“We all have something to fight for. Something that calls us to lead. The question is how will you get it done,” our hero asks as we see footage from the forthcoming film mixed with real life superheroes in action. Breanna Stewart. Candace Parker. Sue Bird. With Basketball dominating social media much more than football we were only just thinking how long will it be before All-Star Game commercials are treated with as much anticipatory hype fanfare as Superbowl spots? Well apparently not long as at halftime of last night’s A.S.G. at the All Star weekend in Charlotte the WNBA and Marvel joined forces to air an amazing trailer/commercial for both the best big superhero movie right now and the next season of Basketball superstars performing heroics.

Empowering women and inspiring young girls worldwide to pick up a ball or the mantle of hero which they already are, this commercial was a hit success. Sure tweet about ‘Team LeBron’ all you want but there is no King without you know who. And standing on their own royal appointment these crowning Marvel’s rocked the halftime crowd like rapper J.Cole on the mic.

Who run the world?

After a terrific season that saw Seattle and it’s future and all-time legend of this sport regardless of gender, Stewart and Bird storm their way to bringing the reign back to Emerald City. The spark was lit that carried the torch and lead her forward. And as Christy Hedgpeth, the COO of the WNBA says, “Women like Captain Marvel and our WNBA players define and inspire our own version of super hero in their everyday lives through their strength, speed and power. Whether that’s through basketball or striving to be the best they can be in the community, our players are inspiring examples of everyday heroes.”

Perfectly fitting you can see a hero for our times in Brie Larson’s ‘Captain Marvel’, from March 8th. International Women’s Day. And then come May 24th right before this writers idol and sisters birthday you can catch a whole other kind of blockbuster season. Hotter than the Summer it’s set in.

They told you to expect great.

Now everyone can witness for real, ‘What Makes A Her(o)’.