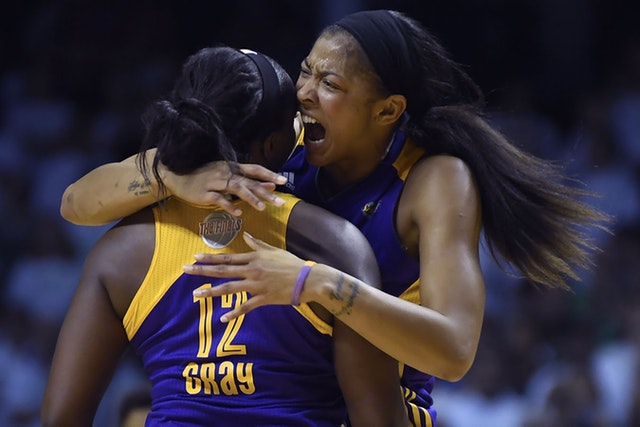 Last years to the wire WNBA Finals between the reigning champion Los Angeles Sparks and the then defending one the Minnesota Lynx ended with a clutch, game and series winning basket. This years rematch between the two teams by the end of the fourth quarter began the same way.

But this time it was reigning WNBA Finals MVP Candace Parker siren screaming in woman of the moment Chelsea Gray’s ear, as her L.A. teammate’s last second shot at the buzzer sparked Los Angeles’ other purple and gold team over the Minnesota Lynx. As they sealed Game 1 with a big escape out of Minny, 85-84.

14 seconds and a shade under 2 seconds was all Gray needed to put the game and the series advantage away for a finals that will determine who the real great WNBA champion truly is. Expect this one to go the distance too between these two evenly matched teams as the Sparks 28-2 advantage in the first quarter (shadowed by another Gray three) and 78-66 one in the fourth was erased to a next basket wins end of the final quarter and first finals game.

“All athletes dream of that moment” Chelsea told reporters afterwards as she capped off a career high 27 points with the greatest moment of her WNBA conception. Doing what fellow L.A. Spark Alana Beard did at STAPLES in Game 1 of last years WNBA Finals versus the Lynx. These razor edge close shaves really keep mirroring each other and if this is the case then things are looking good for the Sparks on reflection.

Superstar leader Candace Parker added a double/double of 15 points and 12 rebounds for the Sparks, whilst Sylvia Fowles of the Lynx played with her own 22 and 13. But it was Maya Moore who paced Minnesota with 27 points as the Lynx turned a 26 point deficit to an 84-83 advantage with 6.5 on the clock remaining.

Despite foul trouble against Fowles and co, Los Angeles WNBA MVP of last season Nneka Ogwumike had 11 points against the Lynx along with Odyssey Sims’ 16. Whilst Minnesota’s Simone Augustus countered with 19 points, 8 rebounds and 4 assists against the Sparks in a contest for a series that proves to be an evenly matched, balanced attack.

But there was a subplot to this storied rivals next episode as these WNBA players responded to President Donald Trump’s call for the NFL to fire players who don’t stand for the national anthem and his refusal to invite the NBA champion Golden State Warriors to the White House following Steph Curry’s decision not to attend the traditional victory visit. As the Lynx players linked arms at home for the ‘Star Spangled Banner’, the Sparks road team left the floor only to return to a chorus of boo’s before they made another silencing statement.

And this is only the beginning.