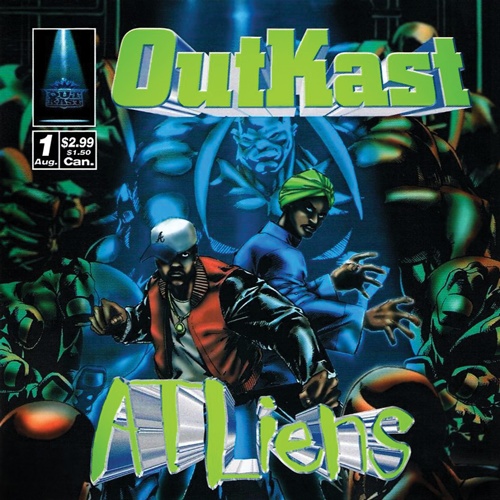 The early 90s for Hip Hop was almost exclusively an east coast/west coast game. So when Outkast came in hard for the south with their excellently produced debut album Southernplayalisticadillacmusik (1994), it was absolutely groundbreaking. While I agree that this debut was one of the best that Hip Hop has seen, I think that Outkast’s most defining piece is their second album ATLiens (1996). For one, second albums always show more of the artist’s intention than the attention-seeking debut. With ATLiens we were able so see how relentlessly creative and well versed Outkast could be. Andre and Big Boi showed more initiative on the production for this album, which leads to an ultramodern almost offbeat sound that most people weren’t ready for at the time but fell much more in line with their innovative personalities. Abandoning much of the ‘playa’ vibe from their 1st album, Outkast delved into content that was reflective and life-affirming without being preachy, giving us a needed fresh perspective on the ghetto life. ATLiens’s highlight is that it is lyrically unparalleled; truly showcasing how masterful Andre and Big Boi can be with their tongue-twisting flow and their complex rap imagery. Never have I heard two MCs work so well together. As they trade verses their raps merge in perfect synergy leaving us with a thorough narrative. If you appreciate rap for its essential element of storytelling, you’ll understand that this is a timeless record.